"They use the Ukrainian factor": why in Germany they announced possible sanctions against the Russian Federation because of the "Nord Stream - 2"

German Chancellor candidate and head of the Christian Democratic Union (CDU) party Armin Laschet said that Berlin will seek new EU sanctions against Moscow if Russia "commits aggressive actions" against Ukraine. According to the politician, in this way Germany will be able to prevent the possible use of the pipeline by Moscow as a geopolitical weapon. According to experts, in this way the German politician is trying to enlist the support of Washington on the eve of the autumn parliamentary elections. 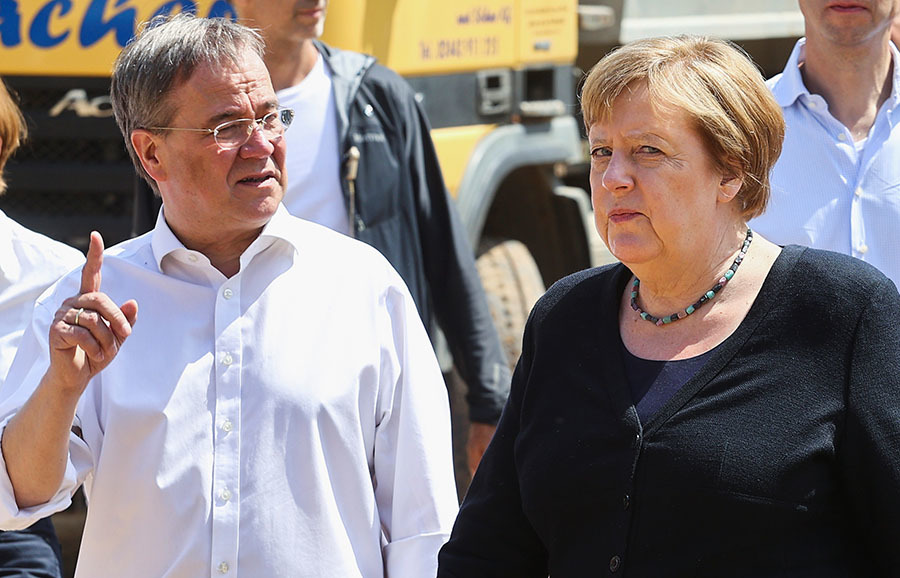 This was stated by the candidate for Chancellor of the Federal Republic of Germany from the conservative CDU / CSU bloc (to which Angela Merkel belongs) Armin Laschet.

“If Russia again commits aggressive actions against Ukraine, Germany will take action at the national level and advocate penalties in the European Union.

Thus, we guarantee that Russia will not be able to use the gas pipeline as a geopolitical weapon, ”the politician said in an interview with the Polish newspaper Rzeczpospolita on the occasion of his visit to Poland.

Laschet added that Berlin got such an opportunity thanks to the recently reached agreement with Washington on a Russian gas pipeline.

“The German-American agreement gives us a tool with which we can jointly hold Russia accountable for destructive actions,” Laschet said.

According to the politician, "support for the sovereignty and security of Ukraine should be a priority of German foreign policy."

“Similarly, it is important to make it clear to Russia that we do not accept this if Russia violates international law, attacks Western democracies using hybrid means, or violates fundamental human and civil rights in its country,” Armin Laschet said.

It should be noted that in the FRG itself such attacks of the politician did not receive support.

Thus, the audience of the German newspaper Die Welt, which reprinted excerpts from his interview to the Polish media, criticized Laschet's theses.

In the comments to the publication, many readers noted that the candidate for Chancellor should first of all think about the problems of his country, and expressed bewilderment about his assertion that Ukraine should be at the center of Germany's foreign policy.

Let us remind you that the construction of the Nord Stream 2 gas pipeline is 99% complete.

After commissioning, its capacity will be 55 billion cubic meters of gas per year.

The project is opposed by the United States, Ukraine and Poland, which see a political background in the energy project, claiming that Moscow allegedly intends to use it as an instrument of influence.

Ukraine, in particular, claims that the gas pipeline threatens the country's energy security, since after its launch, Russia will stop the transit of gas through its territory.

So, in early June, Ukrainian leader Volodymyr Zelensky said that in this case, his country would lose about $ 3 billion a year.

Nord Stream 2 will disconnect Ukraine from gas supplies, which means it will “disconnect” us from at least $ 3 billion a year ... We will have nothing to pay for the Ukrainian army, ”Zelensky said.

A similar position is taken by Poland, which made efforts to slow down the implementation of the project, as reported by the Deputy Foreign Minister Marcin Pshidach at the end of July.

“We have been delaying the finalization of Nord Stream II for several years.

If it were not for our actions, this project would have been completed long ago, long ago Vladimir Putin could have exerted pressure against Ukraine or our other partners.

The longer this gas pipeline is inactive, the better for Central and Eastern Europe and EU unity, ”said Pshydach.

In turn, Washington has repeatedly imposed sanctions against companies involved in the construction of the gas pipeline.

In addition, the Donald Trump administration has repeatedly criticized the position of the Federal Republic of Germany, which stated that the project is not political and is needed to provide the country with energy resources.

Joe Biden's Democratic Administration, which came to power in the United States in early 2021, has also repeatedly declared its rejection of the construction of Nord Stream 2 and its intention to stop its implementation.

However, in May, White House spokesman Jen Psaki admitted that Washington could not influence the construction of the pipeline.

Then, in early June, US Secretary of State Anthony Blinken announced that the completion of the pipeline was a "fait accompli."

The head of the State Department stressed that Washington, unable to stop the project, decided not to follow the path of further deterioration of relations with its ally in the person of Germany, which has invested huge amounts of money in the construction.

Despite this, the President of Ukraine Volodymyr Zelensky did not abandon attempts to influence the implementation of the project.

Before the talks with Angela Merkel, on July 12, Zelensky made a proposal to include the construction of the Nord Stream 2 gas pipeline on the Normandy Four agenda, after which he said that Germany and France must provide Ukraine with energy security guarantees, since the launch of the gas pipeline threatens his country ...

On July 21, the United States and Germany issued a joint statement in which they actually approved the completion of the construction of Nord Stream 2 without additional sanctions from the American side.

Despite the fact that this statement is not a legally binding agreement between the two countries, it caused an extremely negative reaction in Ukraine and Poland.

Warsaw and Kiev condemned the United States for abandoning attempts to stop the launch of the gas pipeline.

It also noted that the agreement between Washington and Berlin allegedly creates additional political, military and energy threats for Ukraine and Central Europe as a whole.

At the same time, the statement of the United States and Germany states that for the construction of Nord Stream 2, it is necessary to ensure the continuation of Russian gas supplies through the Ukrainian gas transportation system after 2024.

Berlin also said at that time that, for its part, it would seek sanctions from Brussels against Moscow if it intends to use the export of energy resources for political purposes.

However, in Ukraine this was considered insufficient, pointing out that the agreement did not contain any guarantees for Kiev.

In particular, Olga Stefanishina, Deputy Prime Minister of the Ukrainian Government for European and Euro-Atlantic Integration, stated this.

“... I would definitely like to emphasize that Ukraine has not received any guarantees.

Neither in the statement nor outside of this statement, ”the politician said.

In addition, she added that this statement does not provide for any new initiatives regarding the European integration of Kiev.

we have not received

any prospects and guarantors of security, in particular with regard to NATO membership, integration with ENTSO (European Network of Electricity Transmission System Operators. -

As for the current statements from the likely successor to Angela Merkel, analysts say they are aimed primarily at a European audience.

Given the context of Berlin's long-term opposition to US sanctions against the gas pipeline, Armin Lashet's attacks are meaningless, says Vladimir Shapovalov, deputy director of the Institute of History and Politics at Moscow State Pedagogical University.

"This position is absolutely ridiculous from the point of view of market relations and the formation of the gas policy of Germany, which over the past years has consistently advocated the implementation of the Nord Stream 2 project, fighting the United States," the analyst emphasized in an interview with RT.

He recalled that the issue of implementing Nord Stream 2 can be considered resolved.

From his point of view, the Ukrainian issue and its need for gas transit were introduced into this topic at the suggestion of Washington.

“For the last time the USA has been consistently using the Ukrainian factor to restrain the implementation of Nord Stream 2.

Naturally, this is the same cliche as the statement that for Russia this is a political project.

In this case, we are talking about transferring an exclusively economic project to a certain geopolitical plane, in which Ukraine and the United States appear, as a result of which Moscow and Berlin supposedly owe Kiev something, ”Shapovalov argues.

In turn, Alexander Kamkin, a leading researcher at the Center for German Studies at the Institute of Europe of the Russian Academy of Sciences, in an interview with RT, noted that Laschet's statements about potential anti-Russian restrictions due to Nord Stream 2 and Ukraine are due to the pre-election situation.

“Given that his popularity is rapidly falling, thus he wants to enlist the support of the United States,” the expert believes.

At the same time, he also believes that the linking of the Ukrainian issue with the theme of the EU's energy policy comes at the suggestion of Washington.

“In this case, the expression“ geopolitical weapon ”that Laschet used in relation to the gas pipeline is a creature of Washington, which was actively picked up in Kiev.

This is a poetic and at the same time political allegory, behind which is read the desire of the United States to impose the supply of its energy resources to Europe, "Kamkin concluded.