"Employing people with useless activities": what can the adoption of a law on national resistance in Ukraine lead to

The official newspaper of the Verkhovna Rada "Voice of Ukraine" published laws on the foundations of national resistance and on increasing the number of the Armed Forces of Ukraine by 11 thousand people. Both regulations enter into force the day after publication and will take effect on January 1, 2022. The laws signed by President Zelensky provide for the creation of national resistance and territorial defense forces in Ukraine, within the framework of which the head of state will be able to create voluntary brigades, battalions and detachments that will act on an equal footing with the Armed Forces of Ukraine. Experts believe that in this way the Zelensky administration wants to distract citizens from the real problems in the country, as well as strengthen its power by creating new armed formations. 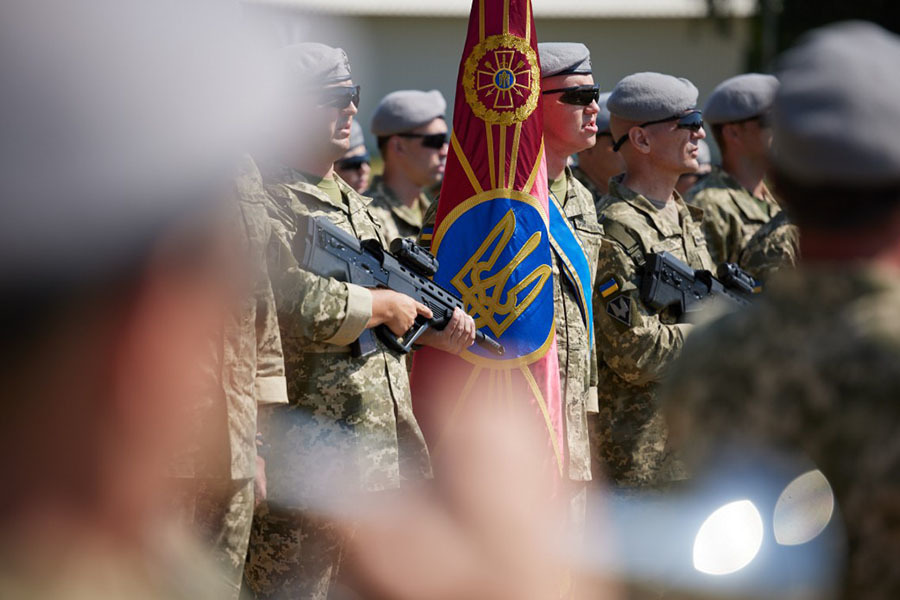 The official newspaper of the Verkhovna Rada "Voice of Ukraine" published the laws "On the Foundations of National Resistance" (No. 1702-IX) and on the increase in the number of the Armed Forces of Ukraine by 11 thousand servicemen (No. 1703-IX).

Both laws come into force the day after their publication and come into effect on January 1, 2022.

The bills were submitted to the Verkhovna Rada by Head of State Volodymyr Zelensky on May 25, 2021.

Commenting on the presidential proposals, the Minister of Defense of Ukraine Andriy Taran then said that if they are adopted "at the legislative level, there will be preconditions for organizing measures to deter and repel aggression with the involvement of citizens, which will force the enemy to stop aggression against Ukraine."

He announced this during a trip to the Zhytomyr region, where he addressed the servicemen of the Special Operations Forces (MTR).

“The creation of a system of national resistance in Ukraine is a powerful signal to everyone that our country will defend itself, will not allow the events of 2014 and that the defense of Ukraine for us is our nationwide business,” Zelensky said.

The Ukrainian president explained that these laws provide for a set of measures aimed at "developing territorial defense and resistance movement", as well as introducing a system of preparing the population of Ukraine for "national resistance".

“It allows, if necessary, to involve the entire population of Ukraine to protect their own, our native land, their land, their families, and unite all Ukrainians around these important, priority ideas,” the Ukrainian president added.

He also said that national resistance measures will be carried out both on the territory of the country controlled and not controlled by Kiev.

Law No. 1702-IX "On the Foundations of National Resistance" presupposes the widest possible involvement of Ukrainian citizens in ensuring the country's military security and inflicting losses on the enemy.

According to the provisions of the law, the constituent elements of national resistance are the resistance movement itself and the preparation of Ukrainian citizens to participate in it - they will be involved in military training in peacetime.

Another element is the territorial defense itself, consisting of military and civilian components.

The leadership of the national resistance is entrusted to the President of Ukraine, who will be able to initiate the creation of territorial defense forces under the Armed Forces of Ukraine and volunteer formations from residents of certain regions and districts of the country.

Territorial defense brigades will be created in regions and cities with a population of over one million, and battalions will be formed in smaller settlements and districts.

Their equipment will be carried out, as in the Armed Forces of Ukraine, by conscription and by contract.

These forces will be based on the territory of the Ukrainian military units and in their municipalities.

Volunteer units will only be recruited through a contract.

The territorial defense zones will be commanded by the heads of regional and district administrations appointed by the president, and operational management will be carried out by officers of the Armed Forces of Ukraine.

In turn, the responsibilities of the Ukrainian General Staff will include supply, organization and conduct of military training, as well as training of volunteers.

At the same time, the main role in the organization, preparation and implementation of resistance tasks is assigned to the Special Operations Forces of the Armed Forces of Ukraine, and the MTR commander will directly control the resistance movement.

It is worth noting that the territorial defense forces are entrusted with a wide range of tasks, which include both patrolling the streets and maintaining public order in peacetime, and participating in hostilities.

The national resistance will be financed "at the expense and within the funds of the State Budget of Ukraine, local budgets, as well as from other sources not prohibited by Ukrainian legislation," the law says.

Political analyst Oleksandr Dudchak believes that this process was initiated by the Zelensky administration in order to distract Ukrainian citizens from real problems that his team cannot solve.

“This is done in order to occupy people with useless activities, to distract from the decline in living standards, the collapse of medicine and education.

The Ukrainian authorities want to make sure that the population is always busy with some kind of activity, so that Ukrainians are involved in such processes and they do not have time to think about what is happening in the country.

It is not known to what extent they will succeed, ”the expert noted.

However, these measures will in no way enhance the capabilities of the Ukrainian army, which "cannot compete with the armies of developed countries," Dudchak added.

Replenishment of the Armed Forces

Together with the law "On the Foundations of National Resistance" Zelensky signed Law No. 1703-IX, which amends the already existing law "On the Number of the Armed Forces of Ukraine."

According to the document, the number of the Armed Forces of Ukraine increases by 11 thousand people - up to 261 thousand.

The explanatory note to the law states that such an increase in the number of the Armed Forces is necessary for the creation and maintenance of the territorial defense forces and the development of special operations forces in the interests of forming a resistance movement.

“In the context of the armed aggression of the Russian Federation against Ukraine and the occupation of a part of the country's territory,” territorial defense and the resistance movement acquire special significance, the explanatory note emphasizes.

In 2022, when the law takes effect, its implementation will require UAH 2.5 billion, according to the Ukrinform agency.

Oleg Nemensky, a leading researcher at the Russian Institute for Strategic Studies, believes that the adoption of such documents is motivated by the desire of the Zelensky administration not so much to protect the country from an imaginary Russian invasion, but to acquire its own army and centralize power.

The expert stressed that, according to the provisions of the law, the new territorial armies will be subordinate to the president.

“It is important for Zelensky to concentrate in his hands as much power and armed formations as possible in order to establish his decisions by force, including when they go beyond the legal sphere,” the political scientist explained.

However, any government intervention in private life is perceived negatively by the population, and any attempt to attract Ukrainians to military service will cause rejection, Nemensky added.

“At the same time, there are many restless people in Ukraine, young people who go to various armed formations. The President will significantly increase the number of people under his authority and thereby concentrate power in his hands and strengthen his position. However, it is not known whether Zelensky will be able to effectively use such great powers of power, because he is an inexperienced person and does not have sufficient training to manage such a complex process, ”the expert concluded.