The Turkish President declared 6 southern states of the country disaster areas due to dozens of fires that broke out in the past days, and Turkish officials said that there are doubts about the cause of many fires at the same time. 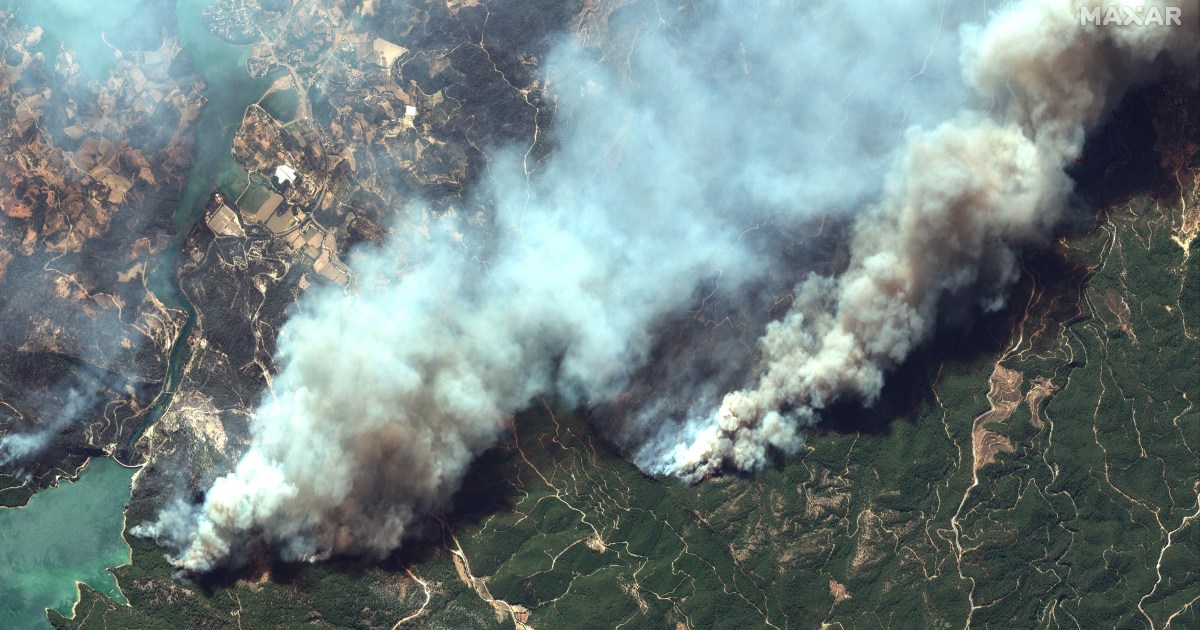 Turkish President Recep Tayyip Erdogan declared today 6 southern provinces as disaster areas due to dozens of fires that broke out in the past days. Turkish officials said that there are doubts about the cause of many fires at the same time, and the security and judicial authorities are conducting investigations in this regard.

The Turkish president said - in a tweet on his Twitter account - that the states of Antalya, Mugla, Mersin, Adana and Ottoman have declared fire-affected areas, and Erdogan pledged that the authorities would continue to "take all necessary steps to heal the people's wounds and compensate for their losses."

As of Friday evening, those fires killed 4 people, and injured dozens, while the relevant authorities managed to extinguish most of them, as the Minister of Agriculture and Forestry Bakr Bakdemirli said - in a tweet this morning on his Twitter account - that the authorities controlled 88 out of 98 fires between 28 and 31 of this month.

The Turkish minister added that efforts are continuing with dedication to control the remaining ten fires.

so far there are four people killed –

Yesterday, Friday, the Turkish President said that 45 helicopters are participating in the firefighting operations, and he continued, "We constantly monitor the situation of the regions in Turkey with our drones," noting that about one thousand and 80 firefighting vehicles are in operations in the affected areas, as well as 280 water tankers and two thousand and 270 rapid intervention vehicles. .

Anadolu Agency reported that planes from Russia, Ukraine and Azerbaijan helped put out the flames.

Separate fires broke out in forests located in forests: Manavgat, Antalya, Adana, Mersin, Bodrum and Marmaris, near the tourist sites overlooking the Mediterranean in southern Turkey, but soon reached populated areas due to strong winds.

The fires killed 4 people, including a 25-year-old man, who was on his way to help in a blaze-stricken area in Marmaris, according to the Turkish NTV news channel.

Dozens of houses, fields and stables in many villages were destroyed by the fire.

In view of the spread of the fire, the authorities evacuated dozens of villages of their residents, as well as a hotel in the tourist city of Bodrum of its guests.

In the areas where the fires have been extinguished, the extent of the damage caused by the fires is being assessed. In the coastal city of Antalya, Al-Jazeera correspondent Al-Moataz Billah Hassan stated that more than 2,300 buildings and large green spaces were damaged.

Al-Jazeera correspondent said that the high temperature in the summer is one of the causes of fires in forest areas in Turkey, but its extension to this large number of cities (20 cities) simultaneously, prompted the authorities to wait before announcing the reasons until the source is ascertained.

Yesterday, Friday, the Turkish president said in press statements that "the issue is not a coincidence, the fires started almost simultaneously in more than one province in the south of Turkey," adding, "We have to stand together on this day and take a unified decision and take united steps in one direction together." ".

Yesterday, Foreign Minister Mevlüt Çavuşoğlu said from Manavgat region, "Who started these fires? We have doubts. All our institutions are conducting a thorough investigation into this matter. Suspects have been arrested."

The authorities arrested 5 people in the Osmaniye area on suspicion of being linked to the outbreak of fires in this area, and the private news agency "Demiroren" (DHE) stated that it was also believed that two boys accidentally set the fire that swept through Marmaris.

The Turkish Minister of Environment and Urban Planning, Murat Kurum, said that the authorities had opened comprehensive investigations into the causes of the forest fires, with the investigations being undertaken by the Ministry of the Interior and the Intelligence Service.

In a precautionary measure, the authorities of major Turkish cities, including Istanbul, prevented entry to nearby forests and national parks. The Istanbul Governor's Office banned entry to forest areas until the end of next August.