The vegetable chapapote returns to the beaches of Cádiz

&amp; quot; It's like chapapote, it sticks to the nets and turns into a viscous mass, it takes days to remove it &amp; quot;, says the senior patron of the Cofradía de Pescadores de Tarifa, ... 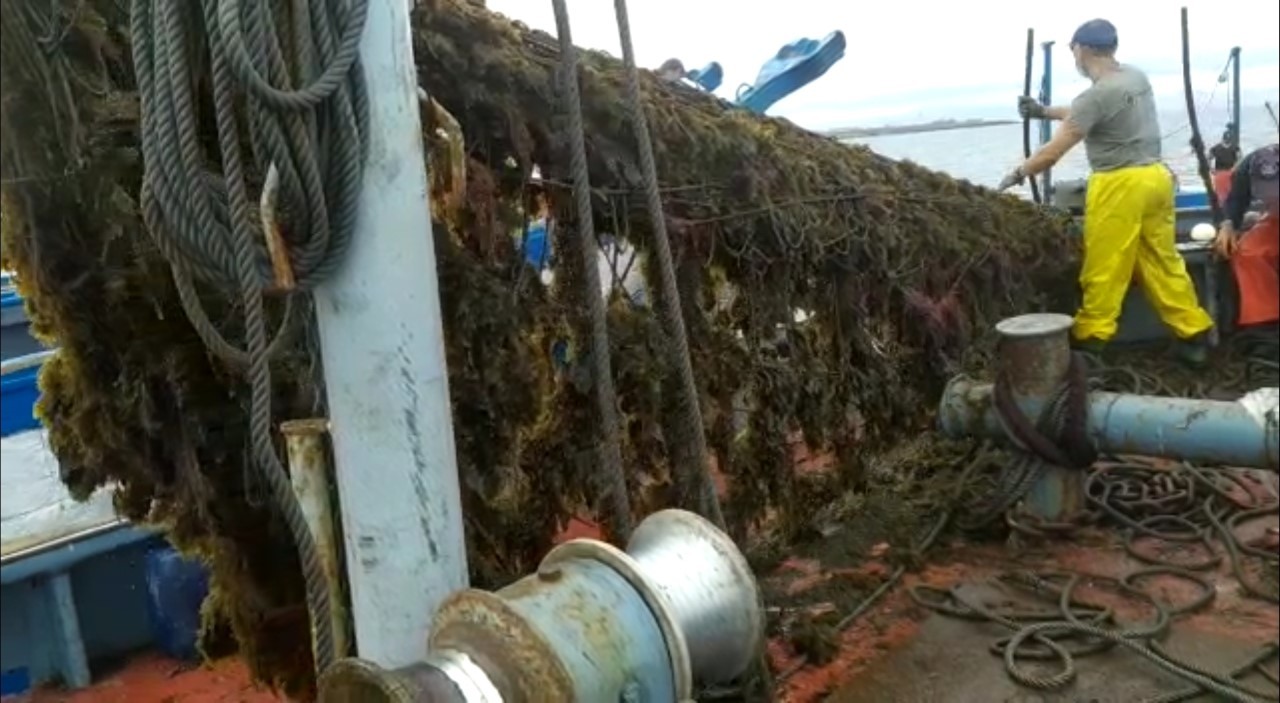 "It's like chapapote, it sticks to the nets and becomes a viscous mass, it takes days to remove it," says the senior patron of the Cofradía de Pescadores de Tarifa,

, to explain his despair over the invasion for the seventh year consecutive of the Asian seaweed, the

, an ordeal that also covers the sought-after

beaches of the Strait

. Although this residual liquid must be treated in port, it seldom occurs, and within it

, awaiting its release to the new natural environment. If the conditions are optimal, and the less 'aggressive' local species, they triumph.

This brown seaweed has triumphed in full, leading to the failure of the fishermen's accounts.

, Tarifa's senior patron, estimates that "what we see on the beaches is at most 10% of what is in the sea." His colleague from Barcelona adds that a few days ago a friendly diver discovered a kelp forest that rose 10 meters from the bottom of the sea.

The Asian algae is able to grasp the shells of live crabs, and to survive in the sand if it is not one of those exposed to the sun. This summer, bathers once again live with thousands of tons of it and with the smell it causes when it dries up, especially in

. "He's finished with this," says a regular Los Caños vacationer,

, while taking some photos of a new arrival in the beautiful cove of El Pirata.

Fishermen already know what to expect if the tidal coefficient is high, that is, if the current is strong.

More algae will end up hooked to the nets.

The art of trammel - a net placed like a wall to hook the catches - is the one that carries it the worst.

It is also the one that fishes species highly appreciated by tourists, such as red mullet, borriquetes, etc.

A fisherman lifts a net full of seaweed.

, since the algae gets hooked on the skewers, rendering them useless. Purse seine fishing works better, since it works farther from land, than the 5 or 6 miles that these fishermen calculate as the area of ​​influence of the algae. The

is half disassembled, and again it has come out with algae, something very dangerous since it makes the nets excessively visible and can scare away the

"It is depleting the fishing grounds, this is a pandemic of the sea," says

. The Ministry of Agriculture and Sustainable Development established aid amounting to

euros. According to the Ministry, the turnover of the Andalusian fishing sector in 2020 presents

compared to the average of the years 2017, 2018 and 2019, although the pandemic that year modulates all the figures.

But mentioning the aid provokes the anger of the older patrons, since for each boat there is a maximum of

, "which will be 3,000, because there is a requirement that does not meet any; this is a tip, a joke, it is not equivalent to a month for a ship that has three or four sailors and the owner ", laments

. "I do not want aid, but fishing alternatives to be sustainable," adds Reyes.

They both see a solution in tuna.

boats of less than 12 meters - is granted a quota of 100 tons of tuna, at an average of 12 euros that is sold at the auction, with that we eat the brotherhoods, the fishmongers, the ice, transportation ... ", explains Reyes.

"Here you only catch tuna and sea bream," which is no longer seen, according to Suárez.

, Professor of Ecology at the University of Seville points out that "brown algae are very rich in terpenes, which are a box of pleasant surprises in medicine: there are anti-inflammatory, anti-tumor, anti-fungal, anti-viral ... "

The biologist investigates this invasion with European funds, in which he believes there will be "a counterattack of the native ecosystem; the invader will remain, but not in the current quantities."

Of course, he adds that he does not know "any bioinvasion as explosive as this one, it has been amazing."

, professor of Entrepreneurial Culture in the region, indicates that the species already ranges from Portugal to Murcia.

In their training center they have been looking for applications for this flood of organic matter for several years.

They have managed to turn it into shoe inserts, although they are still waiting for permission to find a manufacturer.

Another research group, from the Andalusian Institute for Agricultural, Fisheries, Food and Ecological Production Research and Training (Ifapa), located in Almería, and the company Las Chozas, are working to convert

If these lines of use were to work, the same thing ends up happening as the older patron of Barbate comments, between jokes and you will see: "If they gave one euro for every kilo of seaweed caught, everyone would leave the fish and we would go for it ".

CoronavirusHow to make an appointment for the Covid vaccine in Andalusia

IntegrationRadiography of immigration: there is neither "invasion" nor is it a main problem for Andalusians

PandemicThe SOS of tourist municipalities hit by the virus in Andalusia