The Tunisian President reassures the financial institutions, the continued detention of parliamentarians, and the placing of a judge under house arrest

Tunisian President Kais Saied warned against demonstrating against the exceptional measures in which he froze parliament and sacked the government, accusing partisan parties of pumping funds to destabilize, while the Ennahda movement expressed a desire for calm. 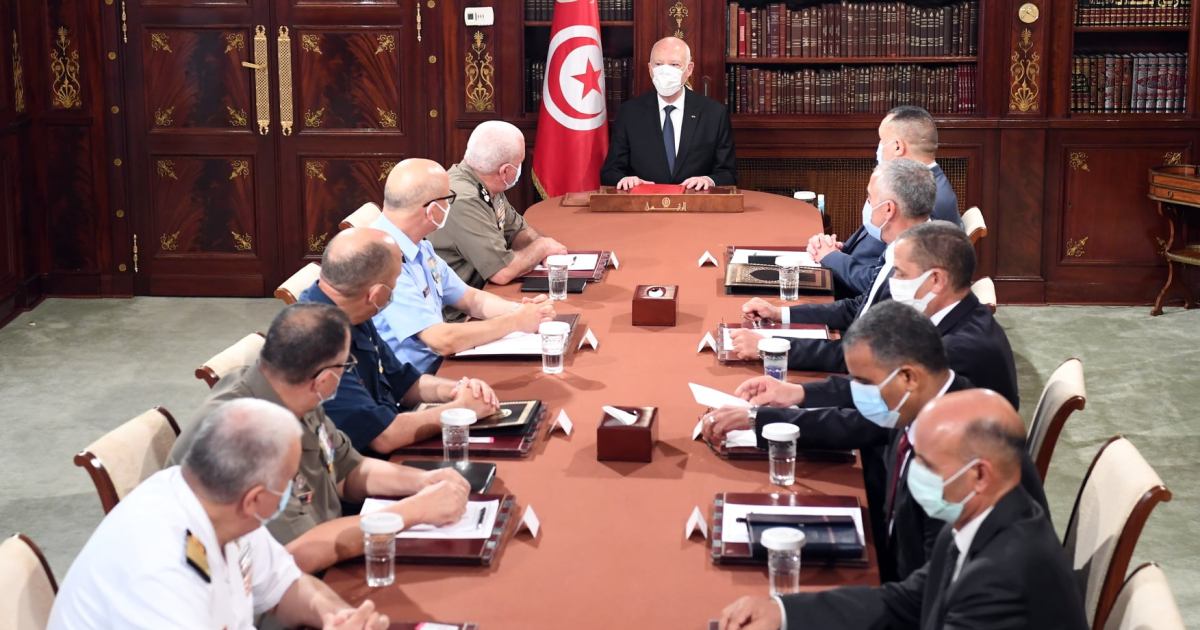 Tunisian President Kais Saied warned against demonstrating against the exceptional measures in which he froze parliament and sacked the government, accusing partisan parties of pumping money to destabilize, while the Ennahda movement expressed a desire to calm down and make concessions to get out of the crisis.

The Tunisian president said that two days ago, a party official gave money to young men to carry out looting and assault on property.

This came during the President's meeting with representatives of the financial institutions, where he assured them that there is no room today for injustice, extortion or confiscation of funds, "the rights are preserved within the framework of the law."

During the meeting, Saeed pledged to work relentlessly so as not to oppress anyone, and said that there is no room for fear or money smuggling.

Earlier, President Saeed said that threatening some political leaders to take to the streets is against the constitution and legal procedures.

The president's statement came in response to a statement by the Speaker of Parliament and the leader of the Ennahda movement, Rashid Ghannouchi, to the French news agency, in which he said that if there is no agreement on the next government, he will call on the street to defend its democracy, and impose the lifting of the locks on Parliament.

On the other hand, the Ennahda movement renewed today, Saturday, its rejection of the exceptional measures taken by the president.

After a meeting of its executive office, the movement said that the president's decisions are "an explicit attack on the requirements of democracy and the individual and civil rights of the Tunisian people, and implicate state institutions in conflicts that hinder them from carrying out their duty to serve the country and the citizen."

Last Sunday, President Kais Saied announced the dissolution of the government and the suspension of the work of the People's Assembly (Parliament) for a period of 30 days, based on Article 80 of the Constitution.

However, the Ennahda movement expressed a desire for calm and called for the national interest to prevail, stressing its readiness to make concessions.

The leader of the Tunisian "Ennahda", Abdel Latif Makki, said that the movement had started a "hidden initiative" to get out of the current exceptional situation after the country's President Kais Saied dissolved the government and disrupted the work of Parliament.

Makki, a former health minister, said that his party started a kind of hidden initiative, adding that there is a movement towards a national dialogue to overcome this crisis situation.

In the same context, the date of the Ennahda Shura Council meeting scheduled for this evening was officially postponed, due to differences between its leaders and Ghannouchi over the contents and outputs.

For her part, the lawyer for the detained parliamentarian, Maher Zaid, said that her client went on a hunger strike to protest his arrest.

Lawyer Hanan Khamiri explained that the security forces arrested the parliamentarian yesterday and told him that the reason for the arrest came against the background of a case in which he was being tried in 2017.

The lawyer added - in an interview with Al Jazeera - that she had submitted judicial documents proving that the prosecution of her client had been stopped, and that this arrest was not legally justified, as she described it, stressing that the motives behind the arrest were political.

Earlier, the "Hope and Action" movement announced the arrest of MP Yassin al-Ayari, who belongs to it, by a group of elements who identified themselves as "presidential security."

The movement added, in a post on its official Facebook page, that Al-Ayari was kidnapped in front of his house by a large group of security forces, and explained that the arrest took place without presenting any document or judicial permission, and without informing his wife of the place he was taken to.

The military judiciary said that al-Ayari was arrested in implementation of a judicial ruling issued against him since 2018, to a two-month prison sentence, and the Tunisian News Agency quoted judicial sources as saying that the prison sentence against the deputy came after he was accused of participating in an act aimed at destroying the morale of the army.

On the other hand, sources told Al Jazeera that the security authorities placed Judge Al-Bashir Al-Akrimi under house arrest today, the judge who investigated the assassination of prominent leftist opponents Chokri Belaid and Mohamed Brahmi in 2013.

Al-Jazeera correspondent in Tunisia Maysa Al-Fatnasy said that Al-Akrimi is accused of covering up terrorism files, and Reuters reported that Tunisian human rights groups accuse the judge of being close to the Islamists, and hiding files related to terrorism.

The Judicial Council had decided two weeks ago to refer Al-Akrimi to the Public Prosecution on suspicion of covering up terrorism-related files.