JO-2020: The triathletes open the counter Tokyo (AFP) Finally ! Dominant triathlon nation, France obtained its first Olympic medal in the history of the discipline, with the bronze medal in the mixed relay on Saturday in Tokyo. Since Sydney-2000 and the introduction of the triathlon at the Olympics, the Blues swam, pedaled and run in vain after this Olympic podium while they are triple world champions in the specialty and offer themselv 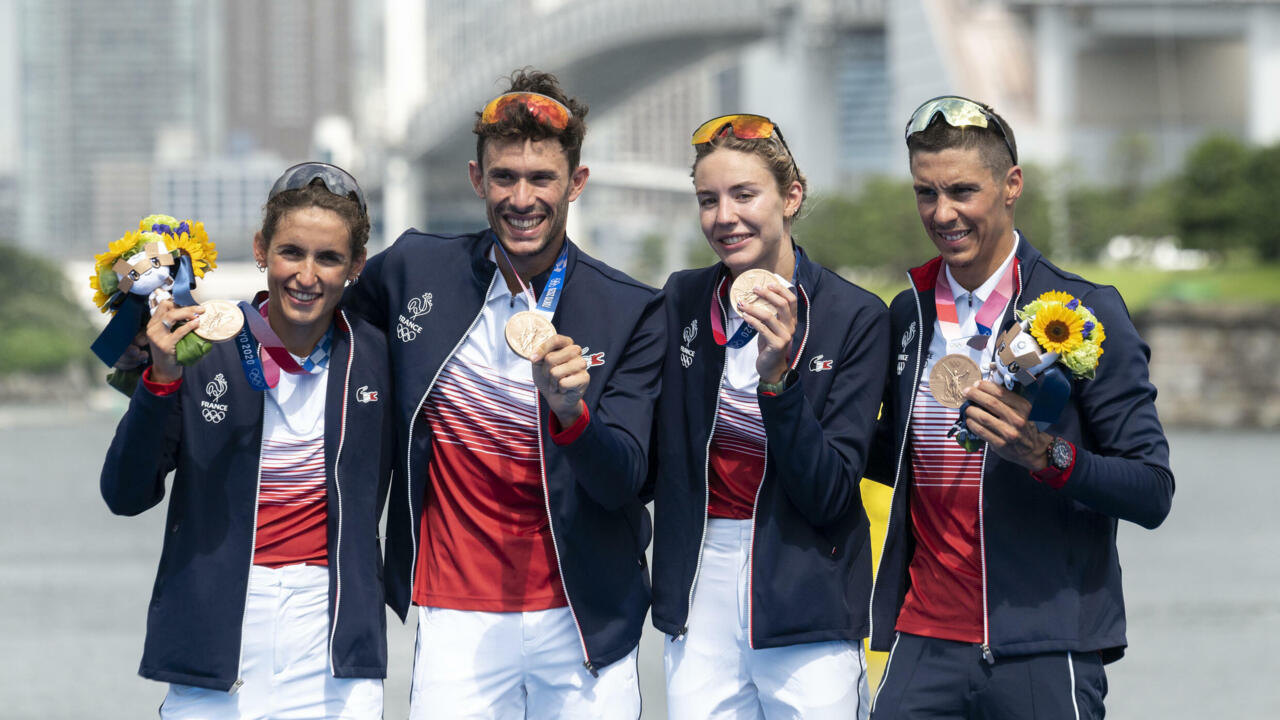 Dominant triathlon nation, France obtained its first Olympic medal in the history of the discipline, with the bronze medal in the mixed relay on Saturday in Tokyo.

Since Sydney-2000 and the introduction of the triathlon at the Olympics, the Blues swam, pedaled and run in vain after this Olympic podium while they are triple world champions in the specialty and offer themselves individual podiums in all the Championships and World Cup or almost.

In Tokyo, they even had a designated favorite, Vincent Luis, eagerly awaited on the individual.

Luis was 13th and 5th place for Léonie Périault - who turns 27 this Saturday - barely made up for this disappointment.

Finally, it is from the mixed relay that the deliverance and the 14th Tokyo medal of France came.

At the start of the race, the Périault-Dorian Coninx- Cassandre Beaugrand-Luis quartet followed in this order the 4 short distance triathlons (300 m swimming, 6.8 km cycling, 2 km running), only behind on the line by Great Britain, 1st, and the United States.

"It's important to react after the individual (races). People have a bit of short memories, France is a dominant nation in world triathlon. We brought home a medal, we work hard, we deserve more respect than that. which was given to us after the individual ", dropped on France 2 Vincent Luis, favorite of the individual men but only 13th.

This result launches a "middle weekend" of the Olympics traditionally at the crossroads of the two major sports, swimming which ends and athletics which begins.

In the pool, the American Caeleb Dressel, already crowned Olympic champion in the 100 m freestyle and the 4x100 m relay, added a third title to his Japanese trip by easily winning the 100 m butterfly.

A distance from his rivals, the Hungarian Kristof Milak, 2nd, and the Swiss Noé Ponti, 3rd, Dressel fought against the clock and lowered the world record (now 49.45).

- Charline Picon for a double -

His quest is not over and the final Sunday of swimming can offer him a firework display with three possible titles in the 50m freestyle, the 4x100m medley and the 4x100m mixed medley.

A total of 6 golds, worthy of Phelps, may be waiting for him at the end of the weekend.

Athletics will be dominated by the women's 100m final, the queen race.

The two Jamaican sprinters Shelly Ann Fraser-Pryce and Elaine Thompson-Herah, three Olympic 100m titles between them, are once again the big favorites.

They will obviously have to get through the semi-finals.

A podium contender, the sprinter was suspended for doping following a positive test for a growth hormone and won the title of first athlete declared positive during the Olympic period of the Tokyo Olympics.

Not yet on the Olympic stadium, the French chances of medals are as always on the tatamis of the Nippon Budokan, with the unprecedented mixed team event in judo in which most of the seven French medalists of the week find themselves and including Teddy Riner. will be the guide, after his bronze on Friday.

But the sabers can also aim just by teams while the rugby sevens players are seriously considering the final since they are in the last four where they face Great Britain for a place in the final (11:30 am local, 4:30 am French).

Sacred in Rio in the last leg of windsurfing, Charline Picon has already secured her place on the podium in Tokyo.

It remains to be seen what color the medal will be.

She is third before the last race and all scenarios are possible.