To escape the flames, dozens of people went to the beach where they were rescued by the coast guard first with rubber boats and then transferred to patrol boats. The airport is back in operation. 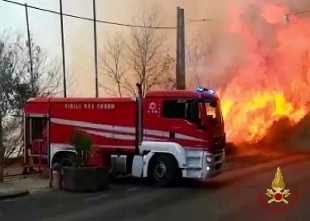 July 31, 2021 - Dozens of people were rescued by the Catania Finance Police following the vast fire that spread to the city. The V818 unit of the Naval Operational Section of Catania - coordinated by the prefecture's crisis unit - helped the residents of the 'Blue Village' locality rescued by sea.

In the meantime, 3 patrols of the Ready-to-use Company have been deployed ashore. Due to the fumes and fumes, a patrol rescued a person who showed obvious signs of suffocation, who was then accompanied to the hospital.

Last night one hundred and fifty people blocked by fires in two seafaring areas of Catania were saved by naval vessels and personnel of the Harbor Master's Office. To escape the flames, they went to the beach where they were rescued by the coast guard first with rubber boats and then transferred to patrol boats. A tugboat and a naval vessel from the Guardia di Finanza were also on site. Some have lost their homes and will be housed in the Sports Hall in Piazza Spedini made available by the Municipality. The interventions were coordinated by the prefecture.

About 50 interventions by the fire brigade in the city, in the cemetery areas, S. Giorgio, via Palermo, the industrial area, the Lidos and the tourist villages. Evacuated some houses affected by the flames. The Le Capannine bathing establishment on the Plaia seafront was destroyed.

The airport has been operational again since last night. Flight operations in departure and arrival had been suspended due to the fires that broke out near the airport to allow the intervention of the fire brigade helicopters.