Kais Saied confirms that he will not turn into a dictator.. Tunisian security arrests two parliamentarians and the judiciary is investigating 4 members of the Ennahda party

On Friday, Tunisian security arrested two parliamentarians, and the judiciary investigated four members of the Ennahda party, while President Kais Saied confirmed that he "will not turn into a dictator." 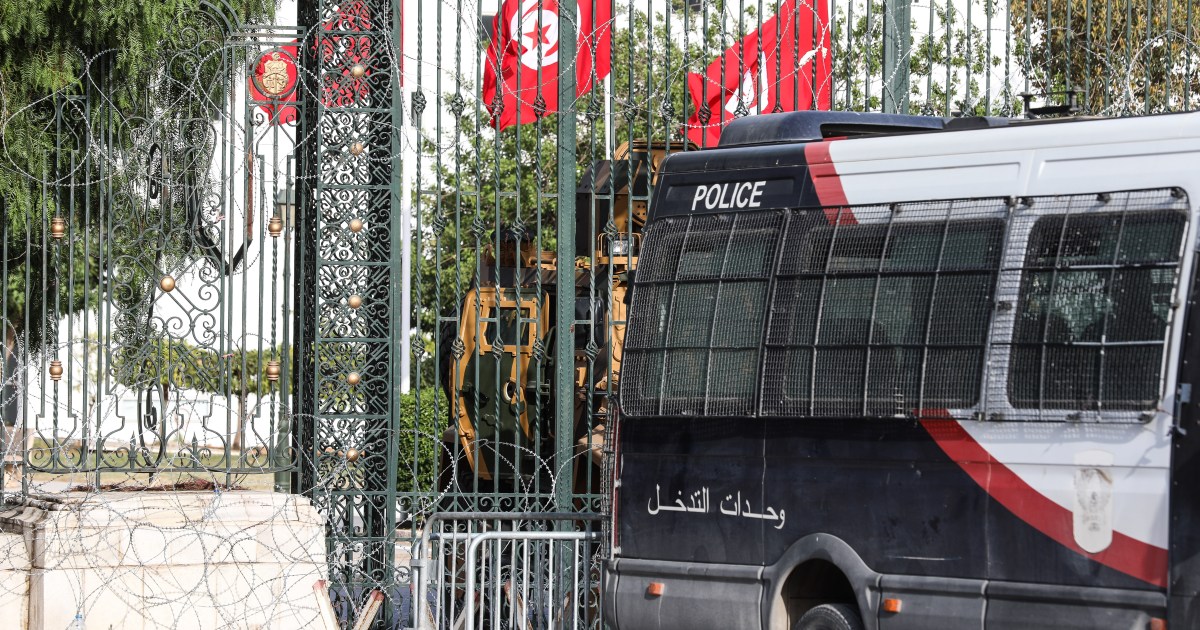 On Friday, Tunisian security forces arrested two parliamentarians, and the judiciary investigated four members of the Ennahda party for allegedly committing acts of violence last Monday during a protest against the decisions of Tunisian President Kais Saied, who confirmed Friday to American media that he "will not turn into a dictator."

Al-Jazeera correspondent said that Hanan Khamiri, the lawyer for Tunisian parliamentarian Maher Zaid, confirmed his arrest by the security forces in connection with a case that was finally settled in 2017.

In contact with Al-Jazeera, Al-Khamiri confirmed that the security authorities refused to release her client despite submitting documents confirming the cessation of searching for him.

In turn, the wife of parliamentarian Yassin al-Ayari said that security forces in civilian clothes arrested him on Friday, days after the decisions announced by the president, which stipulate the dismissal of the prime minister, the freezing of parliament and the lifting of immunity from its members, as well as the president's assumption of executive authority and the presidency of the Public Prosecution.

Al-Ayari had previously criticized Saeed, accusing him of carrying out a military coup, after he dismissed Prime Minister Hisham al-Mashishi on Sunday, suspended parliament for a month, and said he would assume executive power.

"About 20 men in civilian clothes came to the house and arrested him when he went to meet them," the Reuters news agency quoted Ayari's wife, Serene al-Fitouri, as saying by phone.

She added that he was forcibly arrested while his mother was screaming.

They were asked not to take pictures on the phone.

In turn, the State General Agency for Military Judiciary (official) confirmed in a statement, carried by local media, that Ayari was imprisoned in the civil prison in Tunis, in implementation of an effective judicial ruling issued against him by the Military Court of Appeal on December 6, 2018.

The same agency indicated that "this ruling was upheld by a decision of the Court of Cassation, which stipulates that Yassin al-Ayari be imprisoned for a period of two months for participating in an act aimed at destroying the morale of the army with the intent of harming the defense and harming the dignity and morale of the national army," according to the statement.

It is noteworthy that Al-Ayari has been prosecuted in 3 cases filed against him by the military judiciary since March 2017, related to "defamation (insult) and attacking the military institution."

In November 2018, he was sentenced to three months in prison in one of these cases, after he was elected as a Member of Parliament in the partial elections for the German constituency.

In 2015, al-Ayari, the son of a colonel who was killed in 2011 during the first clashes against terrorist groups in the country, spent more than four months in prison after a military court convicted him of contempt of the army's high command on social media.

For its part, the "Hope and Action" list said, in a statement issued on Friday, that Al-Ayari was "kidnapped" in front of his house and taken without presenting any document or judicial permission and without informing his wife of the place he was taken to.

The list indicated that the arrest of al-Ayari was "by a large group of (security) agents who identified themselves as presidential security."

Amnesty International also expressed its concern about the arrest of Al-Ayari, and said that he had previously been subjected to unfair trials for his criticism of successive governments and the army.

The organization added that it strongly condemns the trial of civilians before military courts and trials of opinion, whatever they may be.

"We are closely monitoring the situation in Tunisia and urge President Kais Saied to develop a clear roadmap," she said in a statement.

On the other hand, Qais Saied issued, on Friday, an order to terminate the duties of Mohamed Ali Nafti, Secretary of State to the Minister of Foreign Affairs, Immigration and Tunisians Abroad.

And local media in Tunisia quoted security sources as saying that Al-Azhar Longo, the director general of the relevant departments of the Ministry of the Interior, which includes the intelligence service, had been dismissed.

Since July 25, a campaign of exemptions and dismissals has continued, pursuant to presidential decrees issued in the Official Gazette.

On Thursday evening, Qais Saeed assigned his security advisor, Reda Gharslawi, to run the Ministry of the Interior.

According to local media, Gharslawi was a general police governor before becoming an advisor in the National Security Department at the Presidency of the Republic.

An investigation with members of the Renaissance

In the same context, the judiciary said that it had opened investigations with four people linked to the Ennahda party for attempting to commit violence during the protest at dawn on Monday against the president's decisions, including a member of the movement's Shura Council, and two members linked to its leader and Parliament Speaker Rashid Ghannouchi.

Al-Jazeera correspondent quoted sources in the Ennahda movement that the judiciary released the four observers after interrogating them.

The Ennahda Movement, the largest party in the House of Representatives, organized a sit-in outside the parliament building at dawn last Monday, after the army surrounded it and prevented deputies from entering it.

A confrontation took place between hundreds of Ennahda supporters and supporters of President Kais Saied, and the two sides exchanged stones and bottles.

I will not be a dictator

On the other hand, Tunisian President Kais Saied reiterated - during his meeting Friday with representatives of American media - that the measures he took to freeze parliament and dismiss the prime minister are not outside the framework of the constitution.

Said stressed that freedom of expression remains guaranteed, and that there is absolutely no prejudice to freedoms in Tunisia, and described the threat of some political leaders to take to the street as a violation of the constitution and legal procedures.

Said promised not to turn into a dictator, and said that the aim of his recent measures is to restore the looted rights of Tunisians, and that justice must take its course.

The presidency quoted Saeed, a former professor of constitutional law, as saying, "I know very well the constitutional texts and their respect, and I studied them, and after all this time I will not turn into a dictator, as some have said."

The former Secretary-General of the Democratic Current Party, Mohamed Abbou, warned against any extension of Article 80 of the constitution, which Saeed announced its activation, and according to which he took a number of exceptional measures.

In an interview with a local Tunisian radio station, Abbou considered that any extension of these measures would be considered a dangerous matter, as he put it.

Abbou called on the head of the Ennahda movement, Rashid Ghannouchi, not to involve his movement's supporters in what he described as the Holocaust.

In turn, Ghannouchi said that he will resist by all available peaceful and legal means for the return of democracy, stressing the need for Saeed to understand that parliament must return to the center of decision-making mechanisms in the state.

In an interview with the Italian newspaper "Il Corriere della Sera", Ghannouchi described what happened in Tunisia as a coup, and said that there was still room for dialogue to reach an agreement.

Ghannouchi affirmed his rejection of all the decisions taken by the president, especially that he wants to assume the responsibility of the executive, legislative and judicial authorities in the country, according to him.

He said that Tunisians and Europe are in the same boat and that failure to restore democracy in Tunisia will plunge everyone into chaos.

He added that terrorism can grow and instability can push people to migrate in any way.

On the other hand, Ghannouchi expressed, in a statement to Agence France-Presse, his party's readiness for any concessions in order to restore democracy, noting that the constitution is more important than his party's adherence to power.

At the same time, Ghannouchi warned that if there is no agreement on the next government, he will call on the street to defend its democracy, and impose the lifting of the locks on Parliament, as he put it.

Ghannouchi revealed that he had not had any conversations with President Saied or with his aides since the president's decisions were issued, but added that there should be a national dialogue.