In Spain, villages in the fight for drinking water - France 24

In Spain, villages fighting for drinking water Lastras de Cuéllar (Spain) (AFP) "I brush my teeth with bottled water," sighs Francisca Benítez, 76, who has come to seek shade at the café in Lastras de Cuéllar, a village without drinking water less than two hours from Madrid. In Spain, where water quality is threatened by agricultural pollution, lack of controls and drought, dozens of other villages, like Lastras, suffer from the same problem 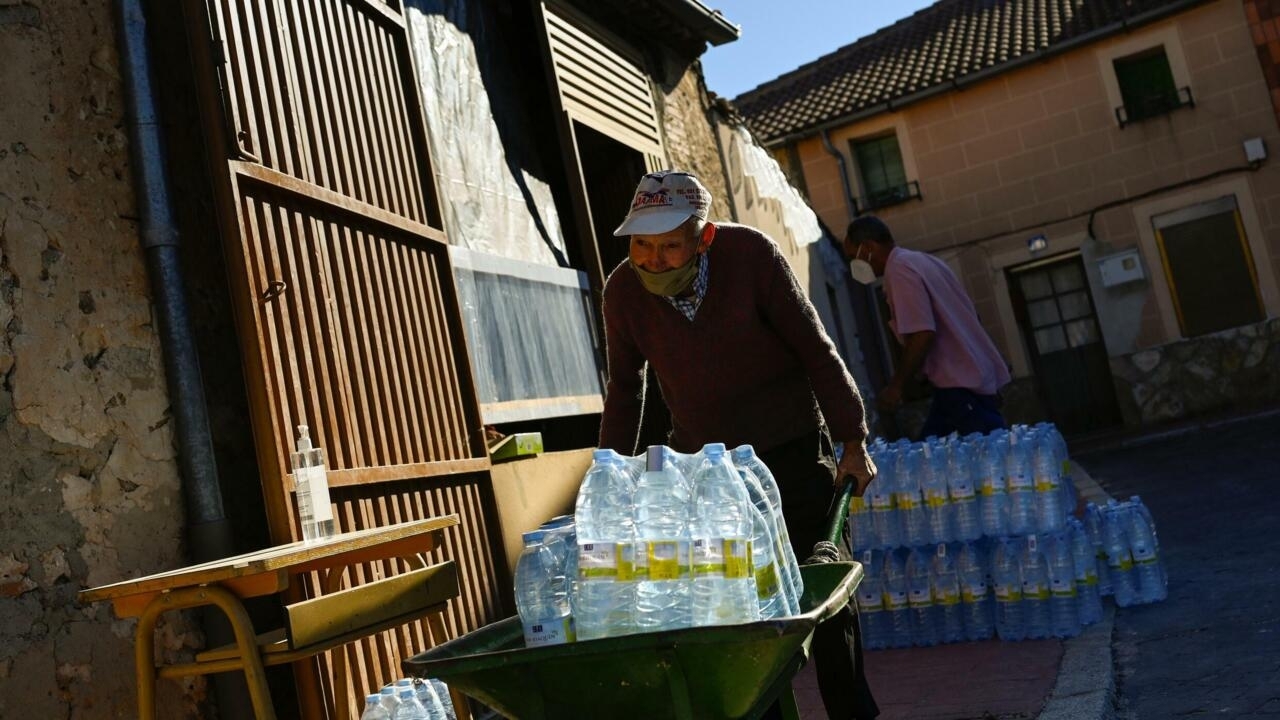 "I brush my teeth with bottled water," sighs Francisca Benítez, 76, who has come to seek shade at the café in Lastras de Cuéllar, a village without drinking water less than two hours from Madrid.

In Spain, where water quality is threatened by agricultural pollution, lack of controls and drought, dozens of other villages, like Lastras, suffer from the same problem.

In this village of Castile and Leon (center), nitrates and arsenic have made the water undrinkable for six years for the inhabitants, who number 350 in winter and nearly 1,000 in summer.

So, every Monday, they parade through the main square to retrieve, at arm's length or in wheelbarrows, water packs partially funded by the town hall.

Like 17-year-old Alejandro Martín, who helps his 95-year-old grandfather bring back precious mineral water before pouring it into a saucepan to brew coffee.

Outside, bouquets and garlands of plastic bottles hang from balconies where banners demand access to drinking water.

"This is not normal in the 21st century", indignant Mercedes Rodríguez, 41, member of a collective of residents.

The mayor, Andrés García, denounces for his part "the lack of public money" which has slowed down a project which should bring back drinking water at the end of the year.

In Castile and Leon alone, 63 municipalities were deprived of it in March according to regional television.

There is no official national figure on the subject.

According to the Ministry of Health, 67,050 analyzes carried out in 2019 at the national level - sometimes in the same place on different dates - showed that the water was not drinkable.

And the levels of nitrates are worrying everywhere, whereas more than a quarter (28%) of the country's groundwater stations measure a concentration above or close to the threshold of drinkability and that nearly a quarter of the country (22%) is "vulnerable". to this pollution due to the nature of the soil or agricultural activities, according to the Ministry of Ecological Transition.

As in Lierta, a village in the region of Aragon (north-east), deprived of drinking water since 2018 because of nitrates and where the inhabitants are fighting against a project to install a new farm with 3,000 sows.

Under a blazing sun, only a dog drinks from the fountain overflowing with algae greener than the surrounding mountains, which dominate a vast expanse of golden fields of grain dotted with pigsties.

Here, it is already "nearly 20,000 pigs for 50 inhabitants", castigates Bernard Más, 68, a member of the residents' association which has just obtained the suspension of the project for one year at the last city council.

In the country of charcuterie, "intensive breeding, maxi-farms are a real problem" for the quality of the water in the areas where they are located, because of the discharge of liquid manure, estimates Luis Babiano, president of the Spanish Association of Public Water Supply and Sanitation Operators.

But the excess of nitrates in water sources remains first of all a "consequence of the use of fertilizers in agricultural activity" which constitutes "the main problem" in the countryside, underlined a report from the Ministry of Ecological Transition. end of 2020.

- "Not drinkable without knowing it" -

"In rural areas, there is insufficient water control and the inhabitants of small towns could be drinking non-potable water without knowing it," warned the same report.

A situation that worries all the way to Brussels, where the European Commission issued an ultimatum to Spain in 2020 to improve its water quality control, under penalty of heavy fines.

Ultimately, the drought, which could worsen in Spain due to climate change, could also jeopardize the quality of water in the country.

Because if the quantity of water decreases and that of harmful products does not decrease, the proportion of these increases in the water, explains Luis Babiano.

In Lastras, Mercedes Rodríguez fears that water pollution will lead to the "extinction" of her village because "who is going to come to a village where you cannot drink tap water?".