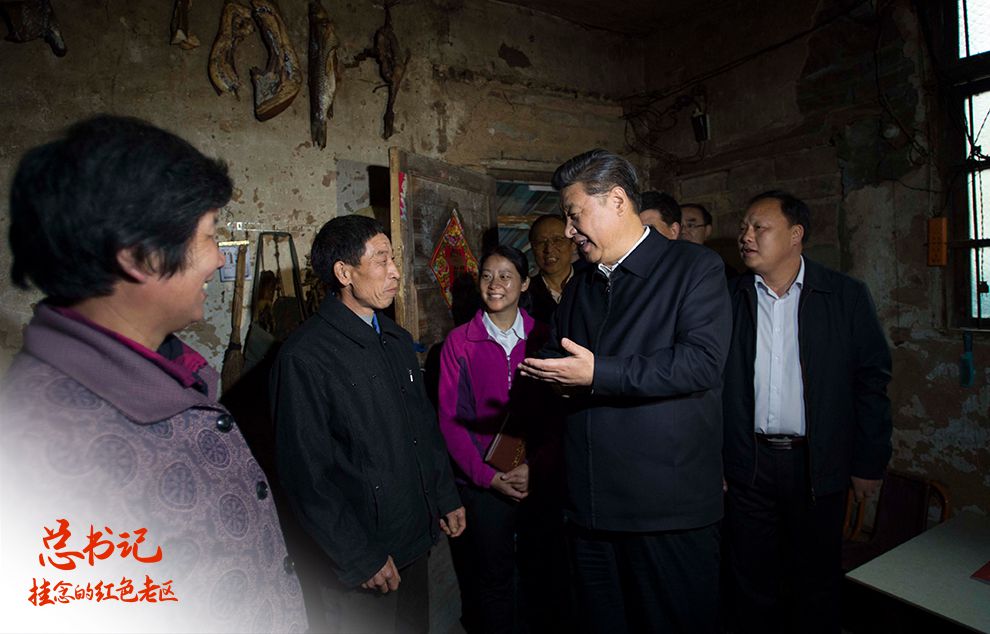 While working in the local area, he has been paying attention to the development of the local old area and the living conditions of the people in the old area.

Since the 18th National Congress of the Communist Party of China, the general secretary's concern for the old districts has remained the same. He has frequently set foot on the red land to visit and sympathize with the people in the old districts.

This is an old revolutionary base, and it was once one of the most impoverished areas in the country.

After the founding of New China, more than 100,000 people in Jinzhai moved away from their homes and moved to the deep mountains in order to build a reservoir to eradicate the floods of the Huai River.

In 2011, Jinzhai was included in the contiguous and extremely poor counties in the Dabie Mountains. 71 of the 210 mountainous villages in the county are impoverished villages. Dawan Village in Huashi Township is one of the poorest mountain villages.

"The great scenery of Dawan is like a ridge when you go out. It is either a stone tripping your foot or a thatch cut your neck." This was a true portrayal of Dawan Village.

The cadres and masses in the village have struggled for decades to get rid of poverty, but until the end of 2014, there were still 554 people out of 928 households with 3348 people in 37 village groups in the village who had not been lifted out of poverty, and the incidence of poverty was nearly 17%.

April 24, 2016 is a day that villagers in Dawan Village will never forget.

On this day, General Secretary Xi Jinping came to the village to investigate poverty alleviation work with his boundless concern for the people in the old district.

The general secretary walked into 5 farmhouses in Dawan Village, including Chen Zeshen and Chen Zeping.

The elder brother Chen Zeshen lost his son in middle age, his daughter-in-law remarried, and his wife died of illness. He took his grandson alone, supported a family on the subsistence allowance and a few acres of Susukino; brother Chen Zeping, his wife had a disability in his right hand, and his son passed away in a car accident a few years ago. .

Is it still a bit cold in the house this season?

How many acres of land do you plant?

How many years can the tea planted be harvested?

How many pigs have you raised?

Is the pork price okay?

The village cadres handed in a survey form for the basic situation of the poor households with a file.

"Immigration direct subsidies", "public welfare forest subsidies" and "labor income"... While reading the items on the form, the general secretary asked Chen Zeping about the expenditure and subsidies for the relocation of poor households, and asked him if he would like to relocate to the mountains.

Chen Zeping replied: "This party's policy is good, I welcome it."

In 2017, Chen Zeping became a forest ranger in the village. Together with planting Chinese medicinal materials and doing odd jobs, his annual income was more than 30,000 yuan, and he was out of poverty that year.

"Our old couple have no worries about food, clothes, medical care, and live in a building. I really want to invite the general secretary to visit our Dawan Village again. I want to tell him personally about the new changes here."

"General Secretary Xi had a family relationship with us that day. I will never forget it for the rest of my life. The General Secretary sat in our yard and held a villager symposium and asked me if I had a wish. I said that I hoped that my income would double in 2016. Later this wish." The excess has been achieved." Chen Zeshen was still very excited when he recalled the scene at that time.

In 2016, Chen Zeshen became a "ten thousand yuan household" with just breeding black goats; in 2017, he became a cleaner for a public welfare position, plus planting Chinese medicinal materials, and his annual income was more than 30,000 yuan. In 2018, he started to work in the village tea factory, coupled with special planting and breeding, and his annual income reached 40,000 yuan.

The story of the Chen brothers' poverty alleviation is a vivid epitome of the impoverished people in Dawan Village moving towards a better life.

From the establishment of 242 households with 707 people in the poverty-stricken households in 2014 and the poverty incidence rate of 20.6%, the realization of “village out of service” in 2018 and the realization of “household poverty alleviation” in 2020, from the blank village of the collective economy in the past to the village collective The economic income was 1.43 million yuan, and the per capita disposable income was increased from 7120 yuan in 2015 to 14,456 yuan in 2020. Dawan Village handed in a brilliant answer sheet for getting rid of poverty and becoming prosperous.

Nowadays, standing at the entrance of Dawan Village and looking around, one side is a patchwork of small buildings with Hui-style architecture, and the other is a brand-new tourist service center.

The old houses have been renovated, the village is clean and tidy, and the roads are flat and wide.

"We will not only be a demonstration of poverty alleviation in the province, but also work hard to demonstrate rural revitalization and grassroots party building." Dawan village cadres and masses are full of confidence in the future.