In the spotlight: many Haitians stranded in Necoclí, Colombia

In the spotlight: many Haitians stranded in Necoclí, Colombia Haitian migrants during a meeting on the beach in Necocli, Colombia, January 28, 2021. AFP - PRENSA MAYOR NECOCLI Text by: Marie Normand Follow 9 mins Publicity Read more A humanitarian crisis is currently playing out in Necoclí, a small town in northwestern Colombia. "The exodus continues" , headlines El Espectador in One. "About 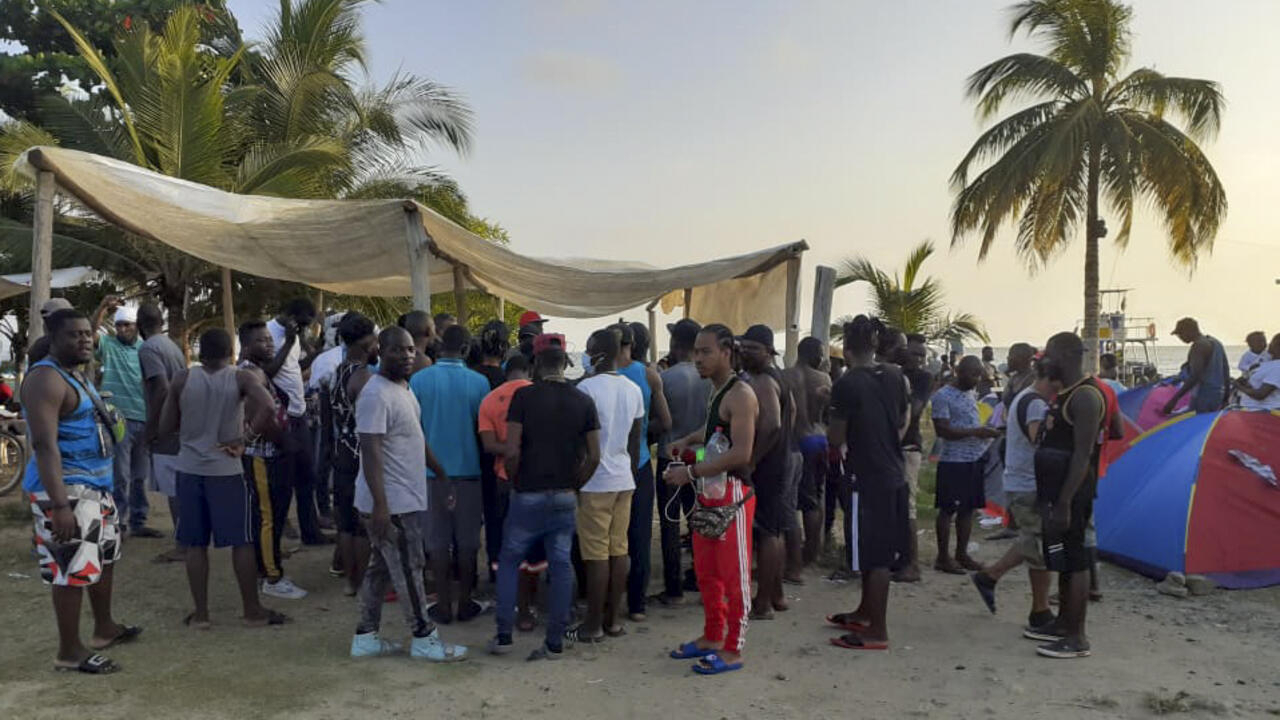 In the spotlight: many Haitians stranded in Necoclí, Colombia

Haitian migrants during a meeting on the beach in Necocli, Colombia, January 28, 2021. AFP - PRENSA MAYOR NECOCLI

A humanitarian crisis is currently playing out in Necoclí, a small town in northwestern Colombia.

are currently stuck "in Necoclí, which is normally only one stop on

their long way to the United States

, explains the columnist of

. At issue: the bad weather and the scarcity of ferry tickets that prevent them from crossing the Gulf of Urabá.

Result: while waiting to take a boat, these migrants gather

"in the streets, parks and beaches"

The municipality is overwhelmed, writes

, by the sudden need to house so many people in the context of a pandemic.

"The price of food has gone up"

The columnist of the Colombian right-wing newspaper asks to listen to the mayor of Necoclí.

The latter requires from Bogota safe conducts for these migrants so that they leave the country quickly.

also calls for substantive decisions for the city, which is the transit point for 800 migrants per day, on average.

Once the Gulf of Urabá has been crossed, it is the beginning of several days of walking in "

one of the densest jungles in the world"

people from Haiti, Cuba, Chile, Senegal, Ghana, among others, have crossed it

And that's also just a step, before crossing the rest of Central America and Mexico to reach the border with the United States.

In Peru, President Pedro Castillo was sworn in on Wednesday July 28. In his speech, he said he wanted to put an end to corruption. He also announces a constitutional reform project. No information, however, on the composition of his cabinet, which is quite unusual, notes

en Une. According to the newspaper, the Prime Minister must nevertheless be sworn in on Thursday in Ayacucho, and his ministers on Friday in Lima. For a political scientist interviewed by the Peruvian daily, this is a sign that negotiations have not yet been concluded within his party, Perú Libre. He hopes this does not presage

before each decision is made.

also gives this Thursday the reaction of Keiko Fujimori, the unfortunate opponent of Pedro Castillo in the second round.

Keiko Fujimori, on the other hand, promises to fiercely oppose the proposed new Constitution.

She even speaks of a

"threat of a new Communist Constitution"

Hunting for critical voices in Nicaragua

In Nicaragua, Parliament on Wednesday removed their legal status from 24 civil society organizations, including 15 in the medical field.

They are accused of breaking the regulations.

However, many of these organizations had been in existence for half a century.

But they had had the bad taste to criticize the management of the Covid-19 crisis.

notes that in all 34 organizations have lost their legal status since 2018. The most emblematic is Cenidh, the Nicaraguan Center for Human Rights.

carried out by an Assembly won over to President Ortega.

The latter must announce that he is running for a 4th consecutive term in the November 7 elections.

New York: $ 100 for those who get vaccinated

The city will offer, from Friday, $ 100 to anyone who will be injected with a dose of vaccine to protect themselves against the coronavirus in one of the centers deployed by the town hall.

The city is worried about an increase in hospitalizations, mostly of unvaccinated people, the

The authorities had reopened all businesses and the masks had slipped under the chin barely a month ago.

But on Tuesday, health authorities recommended that vaccinated people resume wearing masks in closed public spaces in areas where more than 50 new infections per 100,000 inhabitants are recorded.

This is the case, underlines the newspaper,

"in all the boroughs of the city of New York".

We end this press review with the death of a legend.

Dusty Hill, bearded bassist for Texan band ZZ Top, died in his sleep at the age of 72, writes the

The governor of Texas greeted in

"great friend and a remarkable Texan"

"known for its hard rock tinged with blues, was one of the greatest groups of the 1980s,"