What miracle “twisties” did Simone Biles say she suffered from? This is how superstar teammates tell of a gruesome state of fear: “It was painful”

Superstar Simone Biles also withdrew from Thursday’s individual race. Perhaps the biggest superstar of the U.S. Olympic team, the best scaffolding athlete of all time, Simone Biles left Tuesday in the middle of the Tokyo Olympic scaffolding team final. On Wednesday, the U.S. Gymnastics Federation announced that Biles, 24, will also not participate in Thursday’s women’s quadruple finals. Biles said Tuesday he needs to put his mental health first. He stated that he w 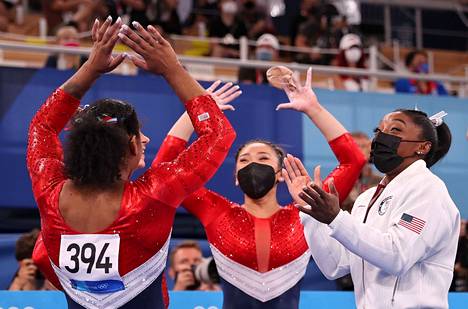 Perhaps the biggest superstar of the U.S. Olympic team, the best scaffolding athlete of all time, Simone Biles left Tuesday in the middle of the Tokyo Olympic scaffolding team final.

On Wednesday, the U.S. Gymnastics Federation announced that Biles, 24, will also not participate in Thursday’s women’s quadruple finals.

He stated that he was not injured in his failed jump in the team competition, but was caused by mental stress that had become too great.

- We fully support Simon's decision and cheer for his courage to put his own health first.

He showed with courage, once again, why there is a role model for so many, the U.S. Gymnastics Association tweeted on Wednesday.

Biles said Tuesday after his retirement that already in rehearsals, his problem was “twisties”.

There is no clear translation of the term twisties in Finnish, but probably the best term is the horror of movement used in Finnish species circles.

According to CNN, twisties is a slang word for gymnastics for fear, as is “mental block,” which could be translated as a mental lock.

Read more: Correspondent's comment: America did not allow Simone Biles to fail - did the superstar become a victim of glow?

According to the official website of the Olympics, the gymnastics superwoman has suffered from similar problems before, as in preparation for the Rio Olympics 2016 and before through 2019. In Rio, Biles eventually won four Olympic golds: in the quadruple match, team competition, main floor and jump.

Simone Biles (right) continued to rejoice in the success of his teammates after his own retirement.

Biles ’teammate from the Rio 2016 Games, Laurie Hernandez, has been interviewed on the Olympics website.

According to Hernandez, the scare typically strikes when doing difficult trick elements, especially on the jump and on the main floor.

Then it is difficult to break down the performance that the gymnast is trying to perform.

- The rhythm is missing and your brain seems to hang for half a second, which is enough to ruin the whole trick.

When that happens, it can take a second, and you can get over it again, Hernandez described.

Read more: Simone Biles broke the silence - this is how she justified her dramatic solution: “I have to put my mental health first”

Another ex-gymnast from the U.S. team, Aleah Finnegan, shared a dread on Twitter.

- I have experienced twisties since I turned 11. I can't even imagine what it's like to be afraid of coming in competitions, Finnegan wrote.

- Then there is simply no control over the body and what it does.

The more you psyche yourself, the worse it becomes.

Usually, in their exercises, gymnasts can practice tricks on a “fire pit” filled with foam or other soft surfaces, as Finnegan mentioned in his tweet.

Of course, they are not used in competitions, nor are they part of the training conditions in Tokyo, says the official website of the Olympics.

- I, too, have had a movement disorder before.

I hated it, it was painful.

It makes you feel like you’re not an athlete of the caliber you really are, Rio gold medalist Hernandez said.

For example, gymnasts in such a foam pool can practice tricks safely, though not in Tokyo.

A statement from the U.S. Gymnastics Federation announcing Biles ’withdrawal from Thursday’s quadruple squad said Biles is now focusing on his mental endurance.

His participation in next week’s rack-specific finals will be decided later.