The UAE and Austria .. 5 files that enhance the partnership of the two countries

The United Arab Emirates and the Republic of Austria have strengthened their friendly relations for nearly 50 years. The official visit of His Highness Sheikh Mohamed bin Zayed Al Nahyan, Crown Prince of Abu Dhabi and Deputy Supreme Commander of the Armed Forces, comes tomorrow, Thursday, to the Republic of Abu Dhabi. 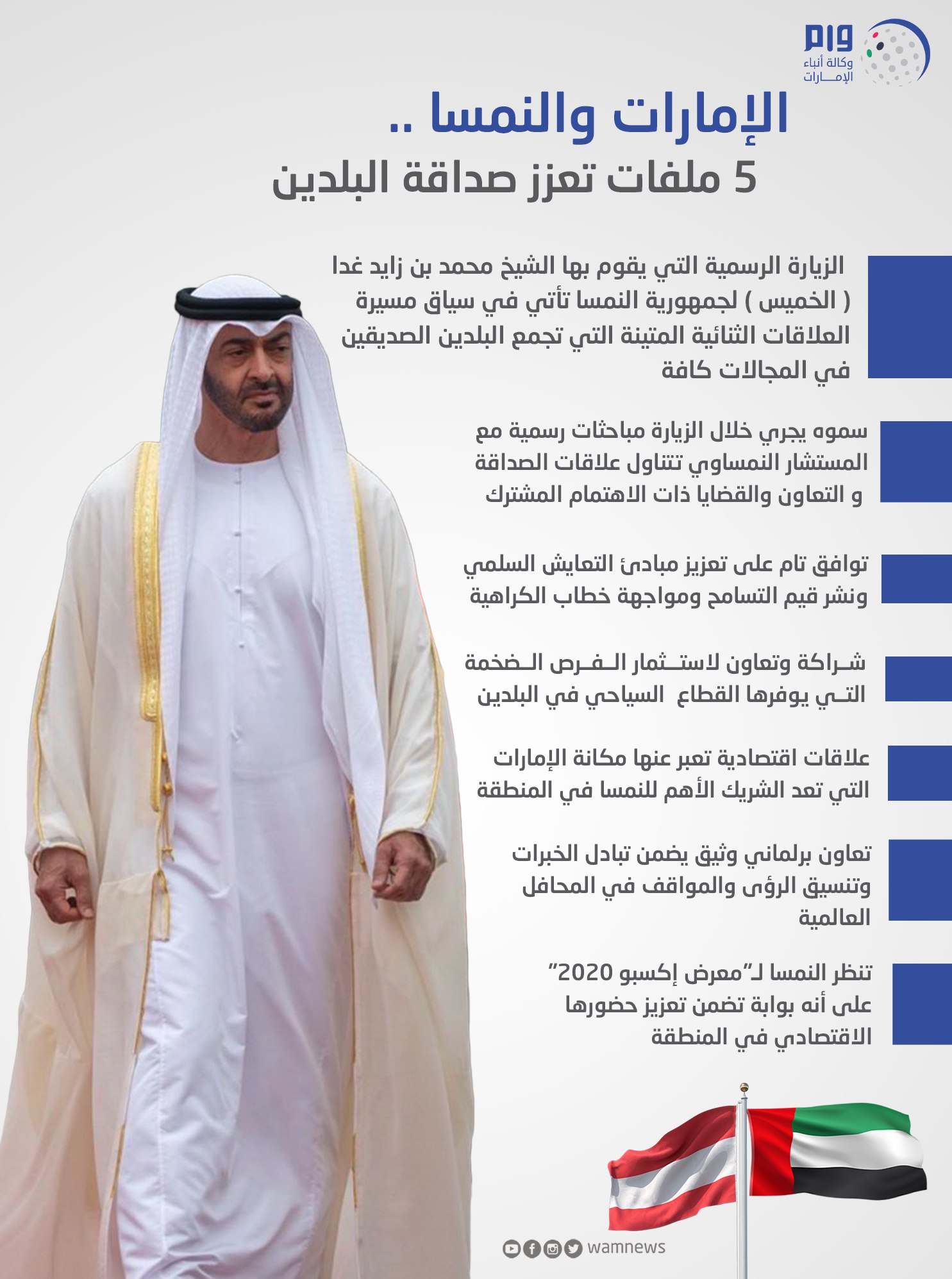 The UAE and Austria .. 5 files that enhance the partnership of the two countries

The United Arab Emirates and the Republic of Austria have strengthened their friendly relations for nearly 50 years.

The official visit of His Highness Sheikh Mohamed bin Zayed Al Nahyan, Crown Prince of Abu Dhabi and Deputy Supreme Commander of the Armed Forces, tomorrow (Thursday) to the friendly Republic of Austria, comes in the context of the solid bilateral relations that unite the two friendly countries in all fields, during which His Highness will hold official talks with His Excellency Sebastian Kurz, Chancellor of Austria, deals with the relations of friendship and cooperation between the UAE and the Republic of Austria, in addition to regional and international issues of common interest.

Coexistence and the fight against terrorism.

The two countries work to support issues of security, stability and development in the world and believe in the necessity of combating terrorism and extremism and confronting terrorist ideas promoted by extremist groups and armed militias in the world and rejecting all forms of violence, terrorism and intimidation practiced by these groups, while emphasizing the importance of preserving young people and immunizing them against terrorist ideology .

The tourism sector is the most important promising sector between the two countries, given the size of the sector and the promising opportunities it provides on both sides.

Austria maintains its position as one of the most important destinations preferred by Emirati tourists, given the great potential it offers, while the country's cities enhance its presence at the top of the list of preferred destinations for tourists from Austria.

Despite the effects imposed by the Covid pandemic on the sector, expectations indicate a gradual return to the level of flights between the two countries, especially with the upcoming hosting of the Expo, which is expected to restore the sector’s brilliance again, while adhering to the best measures applied to ensure the highest standards of safe travel in light of the Covid pandemic. 19 - Economic cooperation.

The UAE is Austria's most important economic partner in the region, while Austrian companies are strengthening their presence in the UAE to take advantage of the great potential offered by the UAE market to investors, especially in the heavy industry and service sectors.

The two countries work as strategic partners on the economic level, and this was translated through holding several coordination meetings with the aim of strengthening the economic partnership and developing frameworks for trade and investment cooperation, while the sectors of digital economy, innovation, information and communication technology, renewable energy, water, logistics and aviation emerged as the most prominent sectors linking the two countries.

The economic relations between the two countries are based on the direct support of the leaderships of the two countries and the size of the opportunities offered by the economies of the UAE and Austria, in addition to their agreement on the principles of economic openness, trade liberalization and non-resort to protectionism, which contributes to drawing a clear road map for future cooperation.

The UAE and Austria have close parliamentary relations through the Federal National Council and the Austrian National Council. In this regard, the two countries have agreed to form a friendship committee between the two parliaments with the aim of exchanging experiences and knowledge and coordinating visions and positions in international parliamentary forums in various fields, while the parliaments of the two countries work to promote cultural and civilized dialogues. To contribute to spreading the values ​​of tolerance, moderation and human coexistence.

Austria seeks for Expo 2020 Dubai to be an opportunity to enhance the presence of its companies in the UAE and the region's markets, as a platform to showcase Austrian technologies and perhaps showcase the advantages of sustainability, smart cities and renewable energy,.

In its pavilion at Expo Milano 2012, Austria exhibited for the first time live forests, which constituted a major destination for all visitors to the exhibition.

It is noteworthy that the relations between the UAE and the Republic of Austria date back to the era of the late Sheikh Zayed bin Sultan Al Nahyan and Chancellor Bruno Kreisky, and their first meeting was in 1973, while the bilateral relations between the two countries were established on March 10, 1974.

Chancellor Bruno Kreisky visited the United Arab Emirates 8 times during the years between 1973 and 1986, while the late Sheikh Zayed bin Sultan Al Nahyan visited Austria 4 times during the same period.