The flood disaster in Henan has caused 13.6643 million people to be affected and 73 people killed

China News Service, July 28th. Zhou Xuewen, Secretary-General of the State Flood Control and Drought Relief Headquarters, Deputy Minister of Emergency Management and Deputy Minister of Water Resources, pointed out that since July 16, the flood disaster in Henan Province has caused 16 cities, including Zhengzhou and Xinxiang. In 150 counties and municipalities, 13.6643 million people were affecte 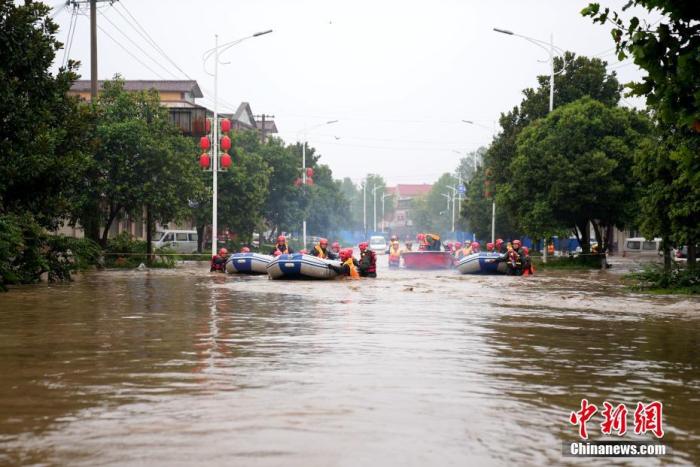 China News Service, July 28th. Zhou Xuewen, Secretary-General of the State Flood Control and Drought Relief Headquarters, Deputy Minister of Emergency Management and Deputy Minister of Water Resources, pointed out that since July 16, the flood disaster in Henan Province has caused 16 cities, including Zhengzhou and Xinxiang. In 150 counties and municipalities, 13.6643 million people were affected, and 73 people were killed.

On the 28th, the State Council Information Office held a press conference on the flood prevention and disaster relief work. At the meeting, reporters raised relevant issues regarding the recent heavy rainfall in Henan.

In this regard, Zhou Xuewen pointed out that, on the whole, the rain and flood conditions in Henan have four main characteristics: the total amount of rainfall and the high extreme value of rain intensity; the intensity of floods is fierce, and the project has many dangers; the scope of influence is wide and the degree of social attention is high; The disaster caused heavy losses and heavy casualties.

Zhou Xuewen said that the total amount of rain in Henan was heavy and the extreme value of rain intensity was high.

From July 17 to 22, the cumulative rainfall of 39 cities and counties in Henan Province reached more than half of the local annual rainfall.

The precipitation in 10 cities and counties exceeded the local annual precipitation, that is, five days of rain fell for one year.

The daily rainfall in 19 cities and counties, including Zhengzhou, Hebi, Anyang, and Xinxiang, broke through the historical extreme. Among them, the 24-hour rainfall at Jiangang Meteorological Station in Erqi District, Zhengzhou City reached 696.9 mm, which is a day and night, exceeding Zhengzhou’s annual rainfall. The total amount of average precipitation.

The annual precipitation in Zhengzhou is 640 millimeters, 696.9 millimeters per day and night.

Secondly, floods are coming fiercely and there are many dangers in the project.

Affected by heavy rainfall, 12 rivers have experienced super-alarm floods, of which 5 exceeded the guaranteed water level and 6 exceeded the historical level.

For example, the Jialu River Zhongmu Hydrological Station in the Huai River Basin exceeded the historical water level by 1.43 meters on the 21st, and the water level and discharge were the first since the data were recorded in 1960.

The three reservoirs of Changzhuang, Guojiazui, and Wuxing were in danger of piping, overflowing dams, and cracks.

The danger of a breach occurred in Dock Village, Xinzhen Township, Junxian County.

A dangerous breach occurred on Muye Avenue in Weihe Xinxiang.

A piping hazard occurred in Litan Village on the right bank of the Jialu River in Xihua County, Zhoukou City.

A total of 7 flood storage and detention areas were opened in Henan Province during this flood.

Furthermore, the scope of influence is wide and social attention is high.

Serious waterlogging occurred in the urban areas of many cities in Henan Province. Among them, the entire Zhengzhou subway line was shut down, large areas of electricity and water were cut off, and communication signals were poor. The production and life of citizens were severely affected.

Some sections of Zhengxi, Zhengtai, Zhengxu and the general-speed Longhai Line, Jiaoliu Line, Ningxi Line, and Beijing-Guangzhou Line were blocked or operated at speed limits, affecting 186 passenger trains, and traffic on national highways 209 and 310 was interrupted.

The dangers of Changzhuang and Guojiazui reservoirs endanger the safety of Zhengzhou's urban areas and the middle route of the South-to-North Water Transfer Project.

The public opinion of the society pays close attention to the flood disaster in Zhengzhou, Henan.

In addition, disasters have caused heavy losses and heavy casualties.

Since July 16th, floods in Henan Province have caused 13,664,300 people in 16 cities, including Zhengzhou and Xinxiang, and 150 counties and districts. 73 people have been killed.

55,000 houses collapsed, and the area affected by crops was 1021.4 thousand hectares, of which 179.8 thousand hectares had no harvest. The statistics of direct economic losses are under further investigation.

Talking about the causes of similar sudden extreme weather, Wang Zhihua, spokesperson of the China Meteorological Administration and Director of the Department of Emergency Disaster Mitigation and Public Services, said that from a general perspective, global climate change has led to an increase in the possibility of extreme weather and climate events. Big, the intensity is getting stronger and stronger.

From the perspective of weather, the emergence of a very heavy rainstorm generally requires very abundant water vapor, as well as a continuous and strong vertical upward movement, so that the water vapor will become raindrops and fall when it is cold.

The occurrence of this extremely heavy rainstorm is due to these two conditions.

Wang Zhihua pointed out that from the perspective of water vapor conditions, Henan was on the edge of subtropical high in mid-July. On July 18, Typhoon No. 6 in the Western Pacific "Fireworks" was generated and approached my country. It was affected by the typhoon's periphery and the southern side of the subtropical high to the east. Guided by the air currents, a large amount of water vapor is transported from the sea to the inland of our country, providing a continuous and abundant source of water vapor for this rainfall in Henan.

Wang Zhihua said that from the perspective of vertical upward movement conditions, the western Pacific subtropical high and continental high remained stable in the Sea of ​​Japan and Northwest China respectively in mid-July. As a result, the low-pressure weather system between the two has been stagnant and less active in the Huanghuai area. The weather system is conducive to the vertical upward movement of the atmosphere to produce precipitation. Coupled with the special topography of the Taihang Mountains and Funiu Mountains in Henan Province, it has an uplifting and convergent effect on the easterly airflow that transports water vapor, making the vertical upward movement more intense, so rainfall is also Bigger and stronger.