The provision governs the governance of the Recovery and Resilience Plan starting from the control room at Palazzo Chigi. It also introduces provisions for speeding up and streamlining procedures and strengthening administrative capacity in a number of areas 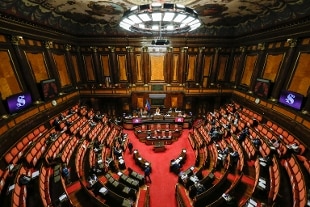 July 28, 2021 Green disc of the Senate Chamber to the confidence requested by the Government on the Simplification-Governance Decree Pnrr (the so-called Recovery plan), in the text already approved by the Chamber. There were 213 votes in favor, 33 against, no abstentions. For FdI it was Senator Andrea de Bertoldi who declared the contrary vote.

Thus came the final go-ahead for the provision, which arrived armored by the House which last Friday approved the trust and text. The decree was to be converted into law by next Friday, July 30th.

Palazzo Madama received an armored text from Montecitorio which, on the other hand, at the level of the Constitutional Affairs and Environment commissions, introduced several changes to the decree law. As the chairman of the Constitutional Affairs Commission, Dario Parrini (Pd) recalled yesterday, explaining the provision to the Assembly, the text is made up of 121 articles: 54 more than the 67 of the original version of the decree law; overall, the additional paragraphs amount to 177.

The provision governs the governance of the Recovery and Resilience Plan starting from the control room at Palazzo Chigi. Furthermore, with the aim of ensuring the implementation of the Plan, the Decree introduces provisions for the acceleration and streamlining of procedures and the strengthening of administrative capacity in a series of areas: from the procedure to renewable sources, from works with significant impact , public contracts, transport and digital infrastructures.

Among the changes introduced in Parliament, the package of measures that streamline the use of the superbonus to 110%. Parliament's involvement in the implementation of the NRP is also strengthened by providing for its monitoring role. For the Mezzogiorno, the constraint of 40% of the resources was made explicit and the current iter on infrastructural equalization was maintained with the extension to the end of the year of the deadline for the recognition of the works financed by the 4.6 billion fund from 2022 to 2033.

"The Simplification Decree has been definitively approved in the Senate. A goal achieved thanks to the great commitment of the competent committees and the Department for Relations with Parliament, which have worked tirelessly to listen to the requests of the Chambers. A complex work, built on dialogue and mediation, necessary to equip the country with new tools that can simplify administrative procedures, streamline bureaucracy for citizens and businesses, regulate and complete the measures envisaged by the NRP ". Thus the minister for relations with the Parliament, Federico D'Inca '.

"The Draghi Government maintains its commitments with Europe and with the Italians. With the definitive go-ahead of the Senate for the simplification decree, Italy enters a new phase in which the Public Administration is the driving force behind the recovery. a gentle revolution that will allow the PA to support digital and ecological transitions, at the center of the National Recovery and Resilience Plan, and to quickly and well spend the 235 billion that the country will have available, between European and national funds ". Thus Renato Brunetta, Minister for Public Administration, comments on the green light of the Senate Chamber to the Dl on simplifications and governance of the PNRR.