Germany, the balance of the explosion at the Leverkusen chemical plant worsens

The accident occurred in the collection area of ​​tanks containing solvents, in a disposal center near Chempark, the "chemical park" managed by the Currenta company. 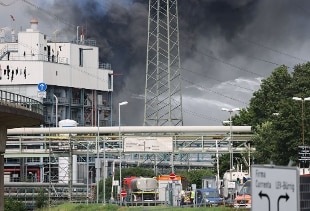 July 28, 2021 "Unfortunately, we must take it for granted that the five missing are not alive".

This was stated by Frank Hyldmar, CEO of Currenta, the company that owns Chempark, the "chemical park" in Leverkusen, Germany, during an update press conference after the explosion at 9.42 yesterday morning.

Two people (a co-worker and an employee of an external company) have already been found dead. One of the 31 injured is serious. Of the five missing, four are employees, one of an external company. Chempark's chief operating officer, Hans Gennen, explained during the press conference that analyzes are still underway to "reconstruct" the events that led to the explosion and, while explaining that the company is aware of what was contained in the tanks. , stressed that the cause of the explosion can also be independent of the content, and therefore preferred, at this stage of the investigations, not to make "speculations".

Both the representatives of the "chemical park" and the representatives of the Leverkusen firefighters present at the press conference also explained that they cannot yet give certain answers on the risk of toxins in the air, reiterating, however, the recommendation made yesterday by the city authorities to the population, especially in the neighborhoods near the site of the explosion, to keep the windows closed and avoid eating fruit and vegetables that are exposed outdoors.

The explosion, and the consequent new smoke occurred in the area where solvent tanks are collected in a disposal center just outside the Chempark, managed by the Currenta company, one of the three plants located near the Rhine river: the other two are present in German cities, Dormagen and Krefeld-Uerdingen.

A total of 70 companies work in the three chemical parks. In the center of Leverkusen, where according to WDR radio, between 25,000 and 48,000 employees work, Bayer Ag and several universities are looking for active ingredients for drugs, chemical groups such as Lanxess, Evonik or Covestro produce over 5,000 chemicals, from acetone to caustic soda. 'sulfuric acid.

Yesterday morning's detonation was heard over 10 kilometers away, while its vibration was recorded by geological stations within 40 kilometers. The "chemical park" has published the first images of the disposal site where the explosion took place: you can see heavy damage to the metal scaffolding, destroyed containers, large burnt areas and a fire brigade crane at work.