The Ministry of Foreign Affairs answers questions on China-U.S. relations and the decision to resume communication between the DPRK and South Korea

Foreign Ministry Spokesperson Zhao Lijian's regular press conference on July 27, 2021 CCTV reporter: Yesterday, US Deputy Secretary of State Sherman concluded his visit to China. How does China comment on Sherman's trip to Tianjin? Have the relevant meetings and talks achieved the expected results of the Chinese side?   Zhao Lijian: Deputy Secretary of State Sherman's trip to Tianjin is another 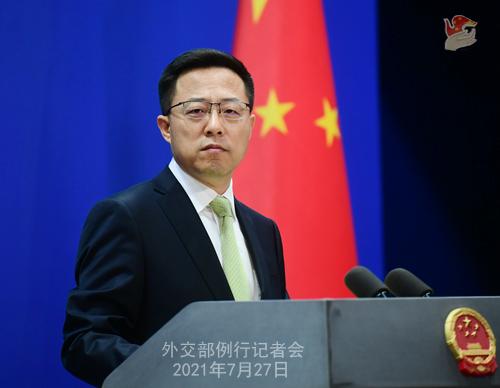 How does China comment on Sherman's trip to Tianjin?

Have the relevant meetings and talks achieved the expected results of the Chinese side?

Zhao Lijian: Deputy Secretary of State Sherman's trip to Tianjin is another important diplomatic communication between China and the United States following the Anchorage Dialogue.

Although Ms. Sherman only stayed for 24 hours, the total time for State Councilor and Foreign Minister Wang Yi to meet with her and Vice Minister Xie Feng to talk with her was 6 hours.

It should be said that the two sides had a deep and thorough talk, which enhanced mutual understanding.

During the meeting and talks, China clearly stated its views on the current Sino-US relations, believing that Sino-US relations are currently facing serious difficulties and challenges, and whether the next step is to confront conflicts or improve development is a huge question mark.

The US needs to think carefully and make the right choice.

In this regard, China resolutely opposes and responds firmly.

The Chinese side pointed out that the root cause of the U.S.'s wrong China policy is that the U.S. has a problem with its perception of China. It regards China as an "imaginary enemy" and China as its main adversary and even advancing in the direction of the adversary.

It is from this understanding that the United States will play up the "competition, cooperation and confrontation" rule of thirds, "starting from power status" and the so-called "rule-based international order", and then will it interfere in China's internal affairs and deal with China. Wrong words and deeds that slander and damage China's interests.

China urges the United States to establish an objective and correct understanding of China, change course, correct mistakes, follow China halfway, respect each other, compete fairly, live in peace, and return to a rational and pragmatic China policy.

China always believes that a healthy and stable Sino-US relationship is not only in the interests of both parties, but also the common expectation of the international community.

During this visit, the US said that it is necessary to "manage bilateral relations responsibly." State Councilor and Foreign Minister Wang Yi put forward three basic requirements for the US to effectively manage differences and prevent Sino-US relations from getting out of control, which are also the three bottom lines that China adheres to.

First, the United States must not challenge, slander, or even attempt to subvert the path and system of socialism with Chinese characteristics.

Second, the United States must not try to obstruct or even interrupt China's development process.

The US also proposed to establish a "guardrail" for the relationship between the two countries. The Chinese side emphasized that the establishment of a code of conduct for Sino-US relations must be negotiated by both parties, must follow the principle of equality and mutual benefit, must be oriented to safeguard the interests of both parties, and must be binding on both parties. It cannot be the United States unilaterally establishing a behavior boundary for China.

During the meeting and talks, China seriously clarified China's position on issues such as the traceability of the new crown virus, Taiwan, Xinjiang, Hong Kong, South China Sea, and cyber security. It severely refuted the fallacy of the United States and clearly put forward China's requirements.

China also submitted two lists to the US.

I introduced it yesterday.

One is a list that requires the U.S. to correct its wrong policies, words and deeds toward China. There are 16 items in total.

The other is a list of key cases of concern to China, with 10 items in total.

The two sides also exchanged views on a number of international and regional issues such as climate change, the Iranian nuclear issue, the Korean Peninsula, Afghanistan, and Myanmar.

China and the United States have good cooperation on these issues, and there is also ample room for cooperation.

However, China clearly pointed out that cooperation should be based on mutual trust and prerequisite for mutual benefit.

The U.S. must show its sincerity and create conditions for cooperation. It cannot harm China's interests while hoping that China can cooperate unconditionally.

In diplomacy, it is not surprising that there are differences and confrontations.

Both sides believed that the meeting and talks were frank, in-depth, and constructive, and both believed that it is very important for China and the United States to maintain communication and that the two sides need to have more open and honest dialogues.

China News Agency reporter: How does China look forward to Sino-US relations after this visit?

Zhao Lijian: Sino-US relations are faced with a choice of where to go.

China’s attitude is very clear. State Councilor and Minister of Foreign Affairs Wang Yi stated that the two sides should find a way to peaceful coexistence and even mutual benefit and win-win between two big countries with different systems, different cultures, and different stages of development through dialogue.

"We must tie the bell to untie the bell." We hope that the United States will change its course and choose to meet the Chinese side, respect each other, compete fairly, and live in peace.

A healthy and stable Sino-US relationship is good for the two countries and a good news for the world.

"Global Times" reporter: According to reports, on the 26th, Russian Prime Minister Mishustin boarded the Southern Kuril Islands for an inspection and proposed to establish a special customs zone in the islands to attract foreign investment.

This move triggered protests from the Japanese side.

what opinions do the Chinese have on this issue?

This is an issue of bilateral relations between Russia and Japan, which should be properly resolved between the two parties.

At the same time, China has always maintained that the victory of the World Anti-Fascist War should be truly respected and respected.

CCTV reporter: Recently, Ipsos polls in the United States showed that 36% of American people believe that American democracy is in crisis, 50% believe that it faces severe challenges, and 75% believe that the current US political system is too fragmented and unconstructive. 71 % Believes that ordinary people lack a voice.

Some analysts believe that these poll data show that the United States' democratic system is difficult to eliminate, and the prospects are worrying.

Zhao Lijian: This is what they call "democracy."

Some American politicians always live in the self-praised image of the so-called "democratic beacon", obsessed with interfering in the internal affairs of other countries under the guise of democracy, and vigorously infiltrating their ideologies.

In fact, what they should do is to take good care of the democratic issues in their country!

Democracy is the common value of all mankind. Whether a political system is good or not depends on whether this system can bring political stability, social progress, and improve people's livelihood, and whether it can win the support and support of the people.

There are a lot of problems in the United States itself, and it is not qualified to impose its so-called democratic model on others with its arrogance and superior arrogance and prejudice, and it is also not qualified to engage in "small circles" targeting specific countries under the banner of "democracy". Degrade or even "demonize" the social systems of other countries.

What the United States should do is to pay more attention to the thoughts and thoughts of the people of its own country, to reflect on itself, and to face up to and solve its own democratic problems.

Can the spokesperson confirm?

Zhao Lijian: Thank you for your concern.

We will announce relevant news in due course.

The leaders of South Korea and North Korea have also exchanged personal letters on many occasions recently.

Some analysts pointed out that this laid the foundation for the resumption of North-South dialogue.

As a close neighbor on the Korean Peninsula, China has always supported the improvement of relations between the ROK and the DPRK through dialogue and consultation and the promotion of reconciliation and cooperation.

It is hoped that the relevant consensus and measures of the two sides will play a positive role in improving and developing North-South relations.

Reporter from the Indian Broadcasting Corporation: The Indian Seamen's Union stated that China has imposed an "unofficial ban" on merchant ships carrying Indian crews and has banned such ships from berthing in ports since March.

Can the spokesperson confirm what is your response to this?

Zhao Lijian: After verification, China has not implemented the aforementioned so-called "unofficial ban."

The relevant reports by the Indian media are not true.