Najib Mikati, one of Lebanon's richest people, returns to the post of prime minister

Najib Mikati - who was tasked, the day before yesterday, with forming a new government - is a Lebanese billionaire who is one of the world's richest people. He entered political life about 25 years ago, and is part of the political class accused of corruption that many demand his departure. If he succeeds in forming a government, Mikati is waiting (65 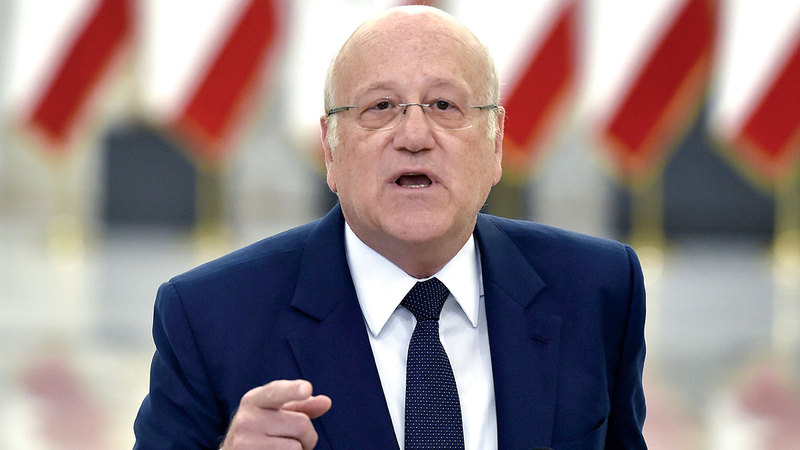 He was elected to Parliament for the first time in 2000

Najib Mikati, one of Lebanon's richest people, returns to the post of prime minister

Najib Mikati - who was tasked, the day before yesterday, with forming a new government - is a Lebanese billionaire who is one of the world's richest people. He entered political life about 25 years ago, and is part of the political class accused of corruption that many demand his departure.

If he succeeds in forming a government, Mikati, 65, a deputy who has previously headed two governments, will have a difficult task, as he will have to take quick and painful steps to curb the prolonged economic collapse, which the World Bank has ranked among the worst in the world, since the mid-19th century.

Mikati does not enjoy wide popular support, even in his hometown of Tripoli in the north, which the United Nations has classified as the poorest on the eastern coast of the Mediterranean. However, his name is usually circulated as a consensual candidate to head the government, to get out of the stalemate resulting from political differences over the sharing of quotas.

Mikati, who is tall and cold features, is known for his calmness and avoidance of provocative statements. He is a successful businessman whose fortune is estimated by Forbes magazine at $2.7 billion, and has been classified as one of the six richest businessmen in the Middle East for the year 2021.

Mikati returns to the presidency as a somewhat consensual candidate, although he is part of the ruling political class, which launched widespread popular demonstrations calling for its overthrow in 2019. His name appears on the list of those accused of corruption, especially after he was prosecuted in 2019 on charges of “illegal enrichment.” In an operation that has not led to any result so far, and he has always denied his involvement in it.

During his political career, which he began in 1998, Mikati held several ministerial positions, and was assigned in 2005 to form a government for the first time after the assassination of former Prime Minister Rafik Hariri.

His assassination at that time led to a sharp political division in the country, between two groups, one of them opposed to Syria, which included Hariri's son Saad and his allies, and another group loyal to Syria led by "Hezbollah".

At the time, Mikati headed a transitional government of 14 ministers whose main task was to organize parliamentary elections.

In 2011, Mikati formed his second government to succeed Saad Hariri, whose government fell following the resignation of ministers representing Hezbollah and its allies. Mikati was accused at the time of being a "puppet" in the hands of Hezbollah, the most prominent political and military force in Lebanon.

In 2013, Mikati submitted the resignation of his government, citing the refusal of the majority in the government to form a commission to supervise the elections.

He was elected as a Member of Parliament for the first time in 2000, and took over the Ministry of Public Works and Transport between 1998 and 2004.

Mikati is considered one of the Lebanese politicians who maintained good relations with Damascus, to the extent that he was considered one of Hariri's political opponents in the Sunni arena, before they allied themselves during the other two years under the banner of the “club of former prime ministers.”

Mikati has a busy career as a businessman. Together with his brother (Taha) in the eighties, he founded Investcom, which has a wide business network in the telecommunications world, in a large number of countries in the Middle East and Africa. In 2007, he established the “M1” group, which is active in the field of business. Diversified investment, and owns shares in the international company "MTN", and works in the real estate, gas and oil sectors, among others, and he also owns with his brother the brand "Fasonable" for ready-made clothes.

In 2021, M1 bought the Burma branch of the Norwegian telecom group Telenor, and the company is on the blacklist of the "Burma Campaign - Britain" movement, which counts international companies associated with business with the ruling military junta, which came to power after the overthrow with civilian government.

Mikati, born in 1955, holds a BA in Business Administration from the American University of Beirut, and pursued postgraduate studies at INSEAD in France and Harvard University in the United States.

Following his meeting with Lebanese President Michel Aoun, Mikati said in a brief speech to reporters, “I know it is a difficult step, but I have been studying the issue for a while, and if I did not have the required external guarantees, and it was time for one of them to be at the forefront of this issue to limit the fire, I would not have taken on this matter.”

He explained: "I do not own a magic wand alone, and I cannot perform miracles, we are in a difficult situation," adding, "But the mission can succeed if we combine our efforts, without quarrels, polemics or accusations. Whoever has a solution, let him present it."

Thus, Mikati will be the third person appointed by Aoun to form a government, after the resignation of Hassan Diab’s government following the horrific explosion of the Port of Beirut on August 4, 2020, which killed more than 200 people and wounded more than 6,500.

International pressures on the political class, which France has exercised in particular, have not succeeded since the explosion in accelerating the birth of a government. The international community requires that it include specialists and accept radical reforms in return for financial support.

This week, Mikati is supposed to start the authorship consultations by meeting the parliamentary blocs at the parliament headquarters. Consultations usually precede difficult informal negotiations between political parties.

It is the responsibility of the next government to reach an agreement with the International Monetary Fund as a first step to get Lebanon out of the economic crisis.

Local media reports quoted that Mikati set a one-month deadline to form the government, after he requested that he receive international and internal support, especially from Hezbollah, to accomplish a task that he is well aware that it will not be easy, especially since he will have to take painful decisions to limit the deterioration of the situation.

However, the local newspaper Al-Akhbar warned that consensus on Mikati does not guarantee the formation of a government quickly, noting that he intends to start his consultations with Aoun from the point at which Hariri stopped, while "there are no indications of Aoun's intention to make fundamental modifications to his position on the method of The formation of the government and its program of work, which means that there is no guarantee that the elements of forming a government will be available.”

The distribution of quotas, and Aoun's insistence on naming Christian ministers, constituted two main obstacles that Hariri's efforts during the past months faced.

After a positive atmosphere appeared on the horizon regarding the agreement on Mikati, the Lebanese pound, which lost more than 90% of its value in two years, recorded a limited improvement on the black market.

Dozens demonstrated, on Sunday evening, in front of Mikati's house in Beirut to protest his return to head the government, especially after his name was associated with the "illegal enrichment" file, in a country that witnessed in 2019 huge protests against the political class of which Mikati is a part.

The continuation of the political vacuum would deepen the suffering of the Lebanese, more than half of whom live below the poverty line, and the country has been witnessing for weeks a fuel crisis, a shortage of medicine and severe electricity rationing of up to 22 hours, and public and private sectors and utilities gradually raise their voices calling for their support to strengthen the provision of services .

• Mikati does not enjoy wide popular support, even in his hometown of Tripoli in the north, which the United Nations has classified as the poorest on the eastern coast of the Mediterranean. However, his name is usually circulated as a consensual candidate for prime minister, to get out of the stalemate resulting from political differences over the sharing of quotas.

Political, economic and social crises since 2019

Lebanon has been witnessing unprecedented economic, social and financial crises since October 2019, exacerbated by the political stalemate.

On October 17, 2019, the Lebanese government announced its intention to impose a fee on free communications via electronic messaging applications such as WhatsApp.

This sparked the anger of the Lebanese who, weeks ago, began to perceive signs of a severe economic crisis, so they took to the streets to express their rejection of the decision, chanting the slogan "The people want the fall of the regime."

The government headed by Saad Hariri backed away from imposing the financial fee, but popular protests continued.

On the seventh of March 2020, the then Prime Minister, Hassan Diab, announced that Lebanon would “suspend” the payment of a debt of $1.2 billion, due on the ninth of it, stressing that “the Lebanese state will seek to restructure its debts,” and on the 23rd of it the Ministry of Finance announced “ Stop paying all outstanding Eurobonds in dollars.

On April 30, the government announced an economic recovery plan and requested the assistance of the International Monetary Fund. About two weeks later, negotiations began between the two parties.

On August 4, a huge explosion occurred in the port of Beirut, killing more than 200 people and wounding more than 6,500 others.

On August 6, French President Emmanuel Macron visited Beirut and called for a “change” in the regime, then held an international conference to support Lebanon, during which the international community pledged to provide emergency aid worth $300 million, provided that it would not pass through state institutions.

On the eighth of August, thousands of Lebanese demonstrated against the political officials who blamed them for the tragedy, which turned out to be the result of the explosion of hundreds of tons of ammonium nitrate, which had been stored for years in the port without any protective measures.

The demonstrations witnessed violent confrontations between angry protesters and the security forces, who used tear gas and rubber bullets.

One of the worst crises since 1850

On February 1, 2021, the authorities announced an increase in the price of bread by about 20%.

On June 1, the World Bank ranked Lebanon's economic collapse among the worst in the world since the mid-19th century.

On July 15, nine months after his assignment, Saad Hariri apologized for not forming a government, after sharp political differences with the President of the Republic prevented him from completing the task. Hariri and Aoun spent the past months exchanging accusations of obstruction due to the dispute over quotas, naming ministers and the form of the government.

On July 26, Najib Mikati, who headed two governments in 2005 and 2011, was tasked with forming a new government.