Federica goes to the final

Fifth Olympic final for Federica Pellegrini: "It was my real goal for this Olympics". Great performance by Thomas Ceccon in the 100 backstroke, the bronze fades by 11 cents 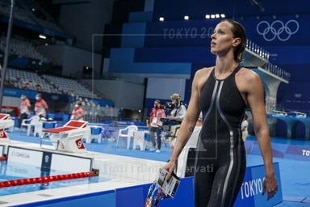 July 27, 2021 Federica Pellegrini hits her fifth Olympic final in the 200 meters above sea level. It is the first time that a woman succeeds in this feat. "It was not the minimum goal, this was my real goal for this Olympics": Thus, moved Federica told Rai microphones. "It was - he added - a difficult goal because the level has risen a lot." Federica struggled to reach the final and the podium is probably out of reach, but the feat she accomplished remains historic. In the previous Olympic finals Federica came second in Athens 2004, then the gold in Beijing 2008, fifth in London 2012 and fourth in Rio 2016. Federica has been world record holder since 2009 with a time of 1'52 "98.

Thomas Ceccon is an excellent fourth place in the men's 100 backstroke in the only final that saw a blue athlete in the pool. With a time of 52 "30 the bronze fades by only eleven hundredths, but Ceccon improves the Italian record for the second time." I'm a bit angry, too bad for the bronze medal. " anyway - he added - I didn't think I was going so fast and therefore I'm happy for the Italian record. But now I'm a bit tired. ”Yesterday the blue was one of the four protagonists of the historic silver won by the 4x100 freestyle relay.

The gold medal was won by the Russian Evgeny Rylov with 51 '' 98, a new European record, two cents better than his compatriot Kliment Kolesnikov. Third was the American Ryan Murphy. That of the Russian athletes is the second national double of the Olympic day. In the men's 200m, Great Britain wins gold and silver with Tom Dean in 1'442 "22, and Duncan Scott in 1'44" 26.

Another surprise came in the 100 breaststroke women. Big favorite Lilly King finished third in 1'05 "54, beaten by the other American, 16-year-old Lydia Jacoby with 1'04" 95. Second place for the very favorite, South African Schoenmaker in 1'05 "22. Martina Carraro finished in seventh place with a time of 1'06" 19. "I knew that getting on the podium in such a high level race would be very difficult but - she told our microphones - I am very happy and then the postponement of a year for the covid has changed many things, the younger ones have come forward, but if tokyo 2020 had been there last year they probably would not have arrived in final ".

Entry into the final of the