Did Kais Saied violate Tunisia's constitution?.. Here is Article 80 on which he based his decisions

Yesterday, Sunday, Tunisian President Kais Saied invoked Article 80 of the constitution, announcing the termination of the duties of Prime Minister Hisham Al-Mashishi, freezing the work of Parliament, and lifting the immunity of his deputies, and opponents say that he violated the constitution. 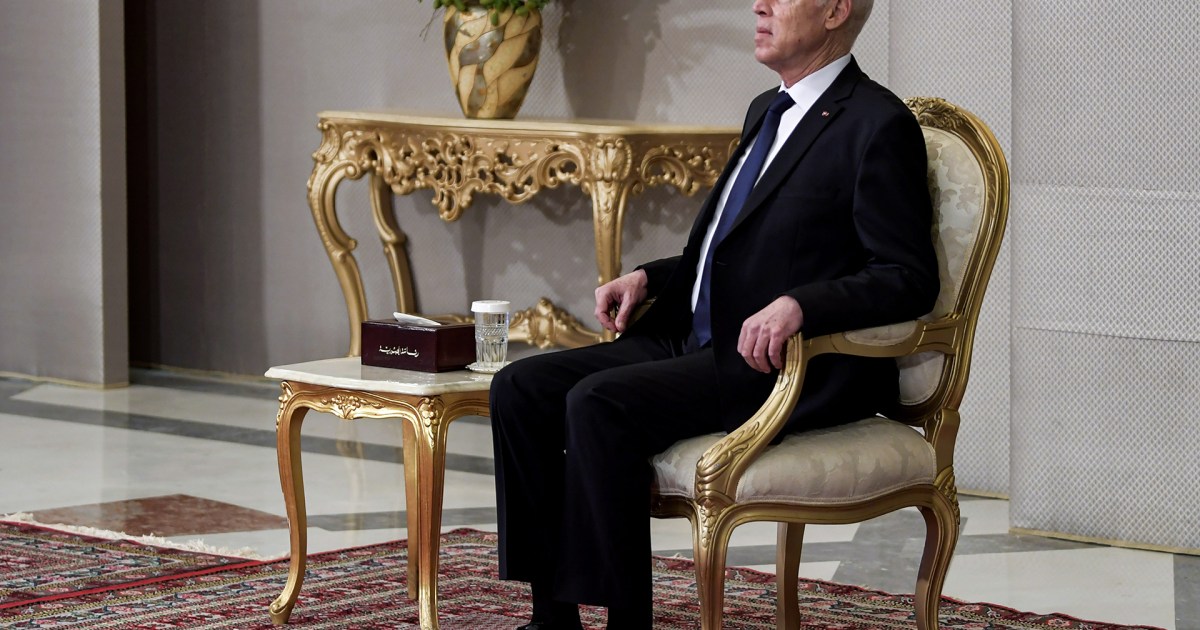 Yesterday, Sunday, Tunisian President Kais Saied invoked Chapter (Article 80) of the constitution, announcing in a speech broadcast on state television the termination of the duties of Prime Minister Hisham Al-Mashishi, the freezing of Parliament, and the lifting of the immunity of his deputies, after presiding over an emergency meeting that brought together military and security leaders at Carthage Palace.

Opponents accuse President Qais of violating the constitution, as he imposed the exceptional state without complying with what was stated in Article 80 that regulates it, especially the need to consult the Prime Minister and the Speaker before making a decision, as well as his initiative to freeze Parliament while the constitution stipulates that the House of Representatives remains in session continuously throughout The continuation of the exceptional situation.

According to the text of Chapter 80 of the Tunisian Constitution on exceptional procedures, “The President of the Republic, in a state of imminent danger threatening the integrity of the country, the security and independence of the country, with which it is impossible for the normal functioning of the state’s wheels, to take the measures necessitated by this exceptional situation, after consulting the Prime Minister and the Speaker of the House of Representatives.” The people, inform the President of the Constitutional Court, and announce the measures in a statement to the people.”

According to the second paragraph of the same chapter, “These measures must aim to ensure the return to the normal functioning of the state’s wheels as soon as possible, and the Assembly of the People’s Representatives (Parliament) is in a permanent session throughout this period. In this case, the President of the Republic may not dissolve the Assembly of the Representatives of the People as No censure sheet may be submitted against the government."

The third paragraph of Article 80 stipulates that “after the lapse of 30 days from the entry into force of these measures, and at all times thereafter, the Constitutional Court, at the request of the Speaker of the Assembly of the Representatives of the People or 30 of its members, is entrusted with a decision on the continuation of the exceptional situation or not.”

The same chapter indicates in its last paragraph that “the court declares its decision publicly within a maximum period of 15 days, and the work of these measures is terminated when their reasons cease to exist, and the President of the Republic sends a statement in this regard to the people.”

It seemed clear that Qais Saeed relied on this article of the constitution in his recent decisions, which were rejected by the majority of Tunisian political forces.

Yesterday, Sunday, Tunisian governorates witnessed popular protests calling for the overthrow of the ruling system and accusing the opposition of failing, in light of political, economic and health crises.

violation of the constitution

Ben Achour, a professor of constitutional law at the Faculty of Legal, Social and Political Sciences in Tunis, said, "The constitution is clear and everything announced by the President of the Republic, Kais Saied, is completely contrary to the constitution."

She added to the local radio "Mosaic" that "the article (article) 80 on which Saeed relied in what he announced does not in any way stipulate his decisions."

She continued, "The president is deceiving us. I am afraid of the dangerous unknown that awaits us."

Saeed had stressed that his decisions “are not a suspension of the constitution, and are not a departure from constitutional legitimacy,” adding, “But if the law turns into a tool for settling accounts and a tool for empowering thieves who looted state funds and the money of the impoverished people, then they are not laws that express the will of the people, but rather tools. to rob the will of the people.

Said's decisions came as a result of protests in several Tunisian governorates at the invitation of activists, as they demanded the overthrow of the ruling system and accused the opposition of failing, in light of political, economic and health crises.

These protests included attacks on the headquarters of the "Ennahda" movement in a number of the country's governorates, which the movement condemned, in a statement, and accused those involved in those attacks of being "criminal gangs employed from outside and within the country's borders with the aim of spreading manifestations of chaos and sabotage, in service of the overthrow agendas." the democratic path and paving the way for the return of oppression and tyranny.

Tunisia is seen as the only Arab country that succeeded in carrying out a democratic transition among other Arab countries that also witnessed popular revolutions that brought down the ruling regimes in it, including Egypt, Libya and Yemen.

But Tunisia, since last January, has been experiencing a political crisis between Said and Prime Minister Mechichi, due to a cabinet reshuffle made by the prime minister, which Said rejects.

In addition to its political crisis, Tunisia is experiencing a severe economic crisis, made worse by the repercussions of the Corona pandemic, which is hitting the country hard, with warnings of an imminent collapse of the health system, which necessitated receiving urgent medical aid from several countries, during the past days.