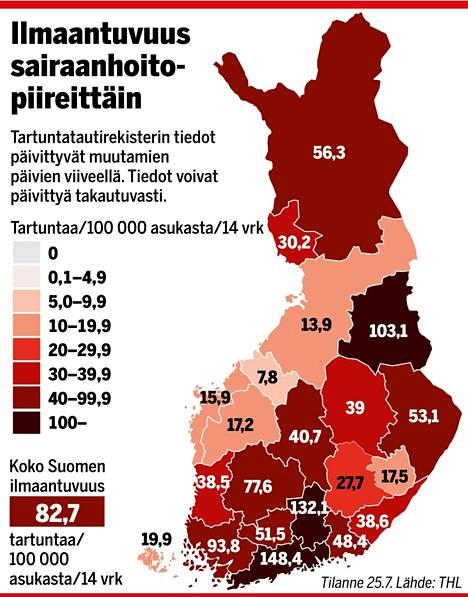 According to the Department of Health and Welfare's THL, 360 coronavirus infections were reported in Finland on Sunday.

The two-week incidence of coronavirus per 100,000 inhabitants is close to 83, compared to just over 50 in the previous two-week period.

Approximately 3.61 million people, or just over 65 percent of the Finnish population, have received the first dose of the coronary vaccine.

Just over 31 per cent of the Finnish population, or about 1.74 million people, have received the second dose.

Read more: THL: 360 new corona infections have been diagnosed in Finland - see the situation by municipality

Read more: Hus's chief doctor says: This is coronary heart disease if you get it after the first vaccination

On Sunday, Diili winner Sointu Borg, who suffered from itching of the ears and mouth in addition to the usual symptoms of the disease, spoke about his corona symptoms.

According to Esa Rintala, chief physician responsible for infectious diseases in the hospital district of Southwest Finland, the itching described by Borg is probably caused by the symptoms of the central nervous system.

I believe that this is related to the corona, but I have not heard of a similar symptom before, Rintala states.

Read more: Infection doctor comments on Sointu Borg's special coronary symptoms: "I have never heard of one before"

Read more: Sointu Borg says that he suffered from a severe corona - he watched strange symptoms at night: “It was already in a state of semi-panic”

In Germany, on the other hand, new restrictions are already being considered on targeted non-vaccinators.

According to Chancellor Angela Merkel's Chief of Staff Helge Braun, a vaccine may not be able to enter the restaurant unvaccinated in the future, even if the German infection rates continue to rise.

Braun spoke about it in an interview with Bild am Sonntag.

In Brazil, meanwhile, inadequate state corona efforts have driven tens of thousands of people to the streets to demonstrate.

Bolsonaro is accused of corruption in addition to inadequate corona measures.

In Brazil, this item has recorded nearly 550,000 crown-related deaths.

There are more deaths in the United States alone, with nearly 120 million more residents than Brazil.

Read more: In Brazil, tens of thousands demand on the streets to prosecute the president

In the United States, the coronavirus cut off Olympic star Bryson DeChambeau’s Olympic trip even before it began.

DeChambeau's infection was revealed in a test done before leaving for Japan.

DeChambeau is already the sixth American athlete to miss the Tokyo Games due to a coronary infection.