Farewell to Dino Impagliazzo, the "Chef of the poor" 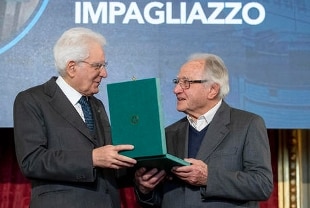 He fed over 300 people every day between the railway stations of the capital together with the volunteers who had followed him for years.

Personality of the Catholic and social world, he was a historical member of the Focolare Movement of Chiara Lubich and of the Community of Sant'Egidio.

He was born on the island of La Maddalena 91 years ago, but he had lived in Rome for a lifetime.

He returned to his island every summer to meet up with his old friends and go fishing.

In 2020, Impagliazzo was awarded the Honorary Honor of the Italian Republic by the Head of State Sergio Mattarella at the Quirinale. He had been awarded in the group of 32 "heroes of our days" for their high commitment in various fields, an example for the country.

He was the founder and president of the RomAmor Onlus association that deals with feeding homeless and destitute people on the streets of Rome, but also with the social recovery of people in difficulty.

The funeral will be celebrated on Tuesday 27 July at 11:00 in the church of Santa Maria in Trastevere in Rome.