China.. Closure of Shanghai commercial area, suspension of flights and transportation service due to Typhoon "N-Fa" 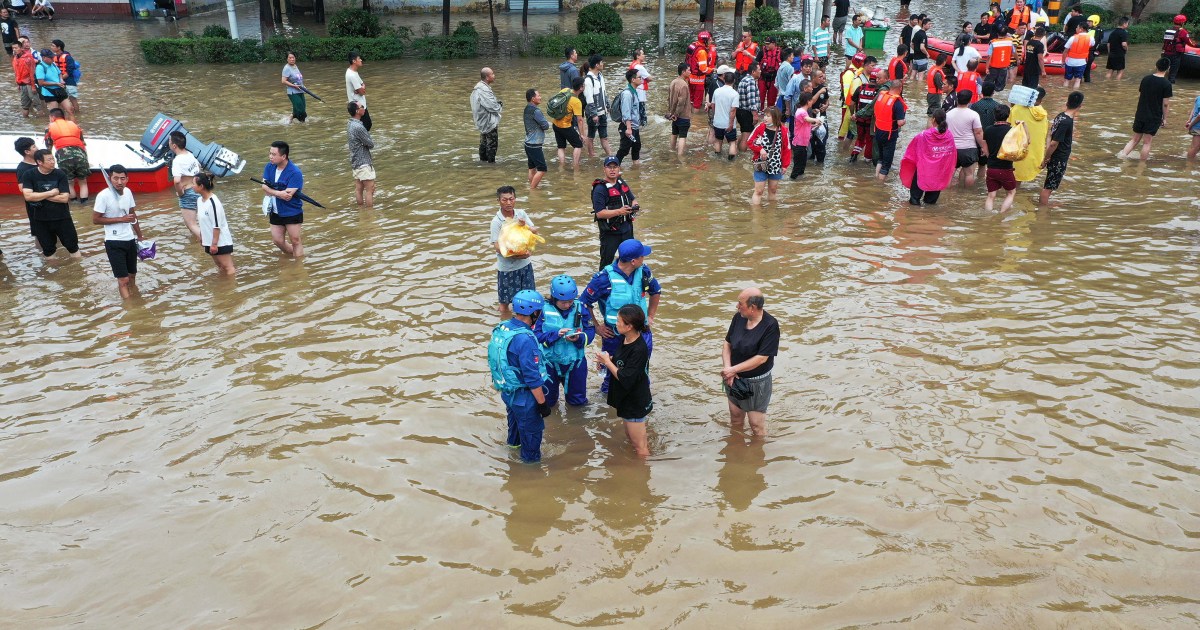 China Broadcasting Corporation reported that the typhoon had reached Putuo District in Zhoushan City, a major port in Zhejiang Province, on the east coast.

This comes at a time when the central region of China is still suffering from the repercussions of massive floods that have killed at least 58 people, cut off electricity and displaced more than one million people.

The Meteorological Department said - earlier - that the hurricane was moving at a speed of 15 kilometers per hour.

She added that the wind speed in the hurricane was 38 meters per second.

According to Reuters calculations, that equates to about 137 kilometers per hour.

Shanghai - with a population of about 26 million people - and Hangzhou to the south, canceled flights from Saturday, and many train services were suspended in the region.

And the floods in the central Chinese city of Zhengzhou - last week - killed 12 people after they were trapped in the subway network.

China's Xinhua News Agency reported that Shanghai Disneyland will be closed on Sunday and Monday due to the weather, while the city's Yangshan port has evacuated hundreds of ships.

And in Henan Province, where unprecedented flooding this week killed at least 58 people, authorities continue to work to remove car bodies and debris from roads to reopen them.

More than 495,000 people were evacuated, according to the Henan government, as the floods caused billions of dollars in damages.

The China Meteorological Agency expects the typhoon to ease over land, but it will bring heavy rains for days in eastern China, including in flooded areas.

The Bureau of Meteorology said Sunday, "Extreme caution must be exercised and disasters that may result from the extreme rain associated with Typhoon N-Fa must be prevented."

China usually witnesses a rainy season, but record rains in Henan have raised doubts about the ability of Chinese cities to cope with these weather phenomena, which experts expect will increase in frequency and intensity due to climate change.

Henan Province - like most parts of China - includes rivers, dams and reservoirs, many of which were erected decades ago in order to contain the flow of water and irrigate agricultural areas, but its construction dates back to decades, while the continuous urbanization of the city puts pressure on the drainage systems.

In India, at least 115 people died in landslides and building collapses caused by heavy monsoon rains, according to a toll announced by the Indian authorities on Saturday.

More than 135,000 people were evacuated and dozens are still missing after heavy rains that led to landslides and floods in western India, especially in the vicinity of Bombay, the country's economic capital.

On Saturday, the Philippine authorities moved thousands of residents of the capital, Manila, from their low-lying areas after torrential monsoon rains inundated the city and neighboring provinces, exacerbated by a tropical storm.

The National Disaster Mitigation Agency said about 15,000 people, mostly from a flood-prone suburb of Manila, had been moved to evacuation centers.

Meteorologists say the Philippines, which has more than 7,600 islands, experiences about 20 tropical storms annually, but the warmer Pacific Ocean will make storms stronger and bring heavier rains.

In some parts of the Philippine capital region, which has a population of more than 13 million people, flood waters rose to waist level, cutting off roads for light vehicles.

Severe thunderstorms hit Belgium - Saturday evening - and damaged the southern province of Namur, according to the authorities, 10 days after floods that killed 36 people in the country.

A spokesperson for the National Crisis Center told Agence France-Presse that no casualties were recorded, stressing that the thunderstorms had ended and the situation had "stabilised".

Pictures were circulated on social media showing streets in which water turned into torrents, in scenes reminiscent of what the Belgian province of Liege witnessed 10 days ago.

On July 14 and 15, Belgium witnessed unprecedented floods due to heavy rains over several days, leaving 36 people dead, in addition to 7 people who are still missing, according to the latest report published by the Crisis Center on Saturday.

During the past days, the number of flood victims in Germany and other European countries rose to 184, including more than 157 people in Germany alone, as well as more than 670 others injured, in the worst natural disaster the country has witnessed in nearly 60 years.