“I do not believe” .. Watch- El-Hefnawi explodes a surprise, wins the 400-meter swimming race, and achieves the first Arab gold at the Tokyo Olympic

Tunisia's Ayoub El Hefnaoui made a big surprise on the first day of the swimming medals at the Tokyo Olympics, winning the gold in the 400 meters freestyle, while Yui Ohashi gave her country Japan an unexpected gold in the women's 400 meters individual medley. 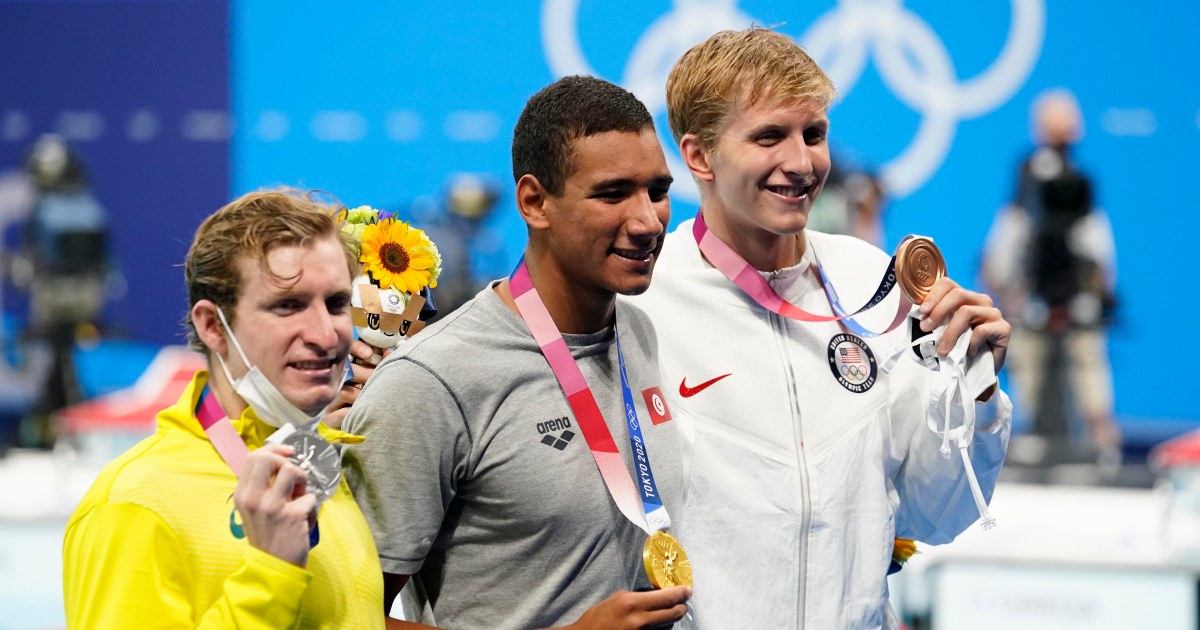 Tunisia's Ayoub El Hefnaoui made a big surprise on the first day of the swimming medals at the Tokyo Olympics, winning the 400m freestyle gold, while Yui Ohashi gave Japan an unexpected gold in the women's 400m individual medley on Sunday.

The Australian women broke the world time of the relay 4 in 100 meters freestyle after achieving 3 minutes and 29.69 seconds to win the gold, while Canada won the silver and America the bronze medal.

The 18-year-old Tunisian swimmer was the slowest among the finalists and started the race in the last lane, but he shone in the last meters and beat Australian Jack McLoughlin, to take the gold in 3 minutes and 43.36 seconds, while the American Kieran Smith won the bronze.

This is Tunisia's fifth gold in its history in the Olympics, but it is the third in swimming, and El Hefnaoui was stunned after his performance.

There were no fans to cheer Ohashi, but her teammates and Japanese officials celebrated after the amazing performance to win the gold with a time of 4 minutes 32.08 seconds.

Ohashi overcame Flickinger in the breaststroke stage and entered the final stage of freestyle swimming with a difference of 1.99 seconds, which helped her to withstand the attempts of Wiant.

After winning the silver in the 400 meters medley at the Rio Olympics, Kalish improved and grabbed the gold with a time of 4 minutes and 9.42 seconds, for America to dominate the first two places after Jay Letherland took the

Calisch, 27, led the race after the noon swim, with France's Leon Marchand in first place after the butterfly stage.

Calisch competed strongly with New Zealander Louis Clairbert during the breaststroke stage, but his opponent fell sharply in the freestyle stage and finished seventh in the end.

"It means everything," Kalish said. "This is the last thing I really wanted to achieve in my swimming career. It's something I've been dreaming of for a long time. I can't believe it."