"The fleet has everything to guarantee the protection of its native country": Putin congratulated the sailors on the Day of the Russian Navy

On Sunday, July 25, the Main Naval Parade was held in St. Petersburg, timed to coincide with the Day of the Russian Navy. In 2021, the country's Navy will be 325 years old. As Vladimir Putin emphasized, the Russian fleet has everything it needs to protect national interests. Military experts note that the Russian Navy continues to upgrade, improving its ships, weapons technology and infrastructure capabilities. 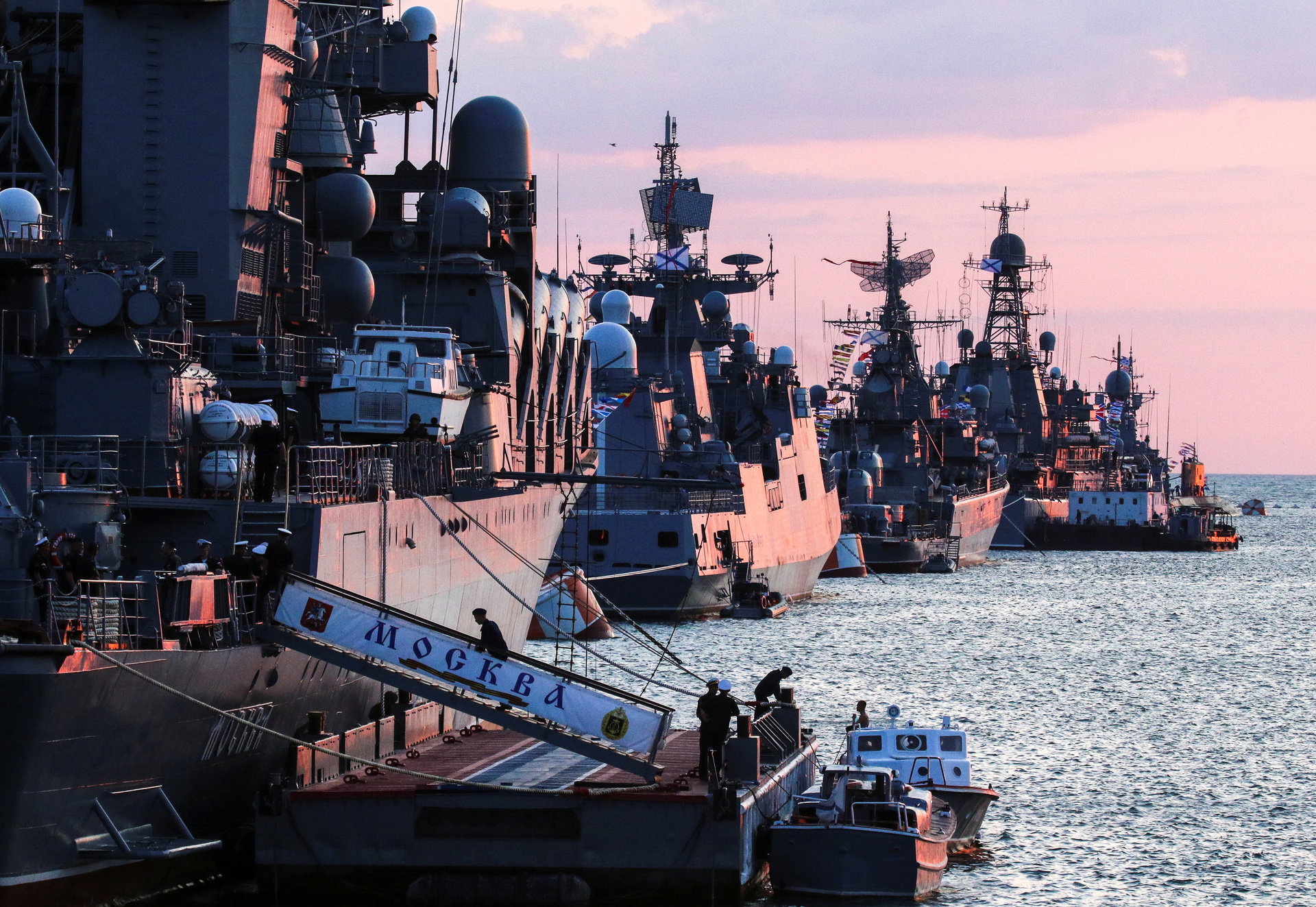 The Russian Navy has everything it needs to defend the country and is capable of striking any enemy.

This was stated by President Vladimir Putin, speaking at the Main Naval Parade in St. Petersburg and Kronstadt on the occasion of the 325th anniversary of the Russian regular fleet.

“Today the Russian Navy has everything it needs to guarantee the protection of our native country, our national interests.

We are able to detect any underwater, surface, air enemy and inflict an inevitable strike on him, if necessary, ”Putin said.

The head of state stressed that the naval presence of Russia is ensured in almost all areas of the world ocean, and the watch in the northern and southern latitudes is carried out by "the faithful heirs of the naval military glory of the Fatherland."

“Service in the navy has never been easy, but it is always one of the most honorable and demanded. Everyone knows the skillful sailors and competent commanders who serve in our fleets - the Baltic, Northern, Pacific, Black Sea, Caspian flotilla, including the crews of warships, boats and support ships, which will be held today in a proud wake, parade formation " - explained the president.

Speaking about the 325th anniversary of the country's regular fleet, he noted that Russia quickly took its rightful place among the leading maritime powers. According to him, a colossal path of development has been passed from a modest Petrovsky boat to powerful ships of the ocean zone and nuclear-powered missile submarines. The Russian fleet also acquired effective long-range and short-range naval aviation, reliable coastal defense systems and the latest hypersonic high-precision weapon systems, "which have no analogues in the world, which we are constantly and successfully improving."

“I am sure that thanks to the professionalism, resilience of military sailors and naval pilots, marines and coastal units, their loyalty to the Fatherland and the Russian fleet, the glory of the St. Andrew's banner will never fade.

Let me remind you of the precepts of Peter the Great, which he reflected in detail in the Naval Charter: do not lower the flag - the flag of the ship, in front of anyone, do not retreat and do not surrender the ship to the enemy, ”Putin concluded.

The fleet's birthday is traditionally celebrated on the last Sunday in July.

In this regard, on July 25, a large-scale Main Naval Parade took place in St. Petersburg.

The tradition of holding naval parades was revived by Russian President Vladimir Putin, who signed the corresponding decree on July 27, 2017.

Today surface and submarine ships of various projects have passed in the water area of ​​the Neva River and the Great Krondshtatsky raid.

More than 50 ships, submarines and boats took part in the parade.

Also this year, warships of the Indian, Pakistani and Iranian navies took part in the ceremony.

Experts note that the Russian Navy has been regularly replenished with new ships in recent years and is strengthening its capabilities.

Recall that in 2018, Vladimir Putin announced the approval of the State Armaments Program (GPV) for 2018-2027.

The Ministry of Defense said that 20 trillion rubles were allocated for its implementation, of which 19 trillion - for the purchase, repair and development of weapons, military and special equipment, and one trillion - for the construction of the corresponding infrastructure.

In 2019, the head of the defense department, Sergei Shoigu, said that within the framework of the GPV, the Russian fleet will receive a total of over 180 ships and vessels of new projects in the period from 2018 to 2027.

The replenishment of the Navy with new ships continued in 2021.

So, in May, Vladimir Pospelov, a member of the board of the Military-Industrial Commission and the Naval Collegium under the government, announced that the Russian fleet this year will receive about 40 ships and support vessels of various classes.

In a commentary to RIA Novosti, he said that it was planned to hand over ships of the frigate and corvette classes.

The next serial diesel-electric submarines of Project 636.3 will be surrendered, as well as small missile ships, patrol boats and support vessels.

In addition, the fourth-generation nuclear-powered strategic submarine Knyaz Oleg (project Borey-A) and the first serial submarine of the Yasen-M project, Novosibirsk, will be adopted.

It is planned that the fleet will have ten such submarines in total.

In addition, the construction of four nuclear submarine cruisers of the Yasen-M project is underway: Arkhangelsk, Krasnoyarsk, Perm and Ulyanovsk.

In the summer of 2020, two more nuclear submarines of this project were laid down: Vladivostok and Voronezh, which are planned to be transferred to the fleet in 2027-2028.

These submarines have been entering the Navy since 2019.

At the end of June, the Magadan diesel-electric submarine entered the Baltic Sea for factory sea trials.

In an interview with RT, military expert Yuri Knutov highlighted among the noteworthy ships of the Navy the missile cruiser Admiral Nakhimov, which will host the Zircon hypersonic missiles, the Borei project nuclear submarine and the unique submarine Belgorod, which is the carrier of a deep-sea vehicle with nuclear warhead "Poseidon".

"Such technologies make the Russian fleet the most powerful and efficient, which significantly increases its ability to solve complex combat missions," Knutov said.

In turn, a military expert, retired colonel Viktor Litovkin, in a conversation with RT, emphasized that the renovation of the Russian fleet is proceeding in various directions.

“The navy receives not only new ships, but also aircraft, air defense systems, a deep modernization of existing ships is underway.

Infrastructure is being built - berths and bases on which they will be located.

Today the fleet is developing very harmoniously, ”the expert said.

Defense of the frontiers

In addition to equipping with new ships, the Russian Navy regularly conducts exercises and improves the combat training of crews.

Tactical naval groups made a transition of about 4 thousand km, the Ministry of Defense said.

Up to 20 surface warships, submarines and support vessels took part in the maneuvers.

Among them are the missile cruiser Varyag, the large anti-submarine ship Admiral Panteleev, the frigate Marshal Shaposhnikov, as well as the corvettes Loud, Perfect and Hero of the Russian Federation Aldar Tsydenzhapov.

On July 23, the All-Russian Center for the Study of Public Opinion published the data of a poll timed to coincide with the Day of the Navy.

According to its results, the overwhelming majority of Russians - 84% - believe that the Russian Navy is capable of protecting the country's maritime borders in the face of a real military threat.

VTsIOM notes that the share of those who are convinced of the strength of the Russian Navy has grown significantly over the past 16 years - in 2005 it was 70%.

Today, one cannot neglect any element of strengthening the security of the state, which is why the attention of the country's leadership to the Navy is so important, Viktor Litovkin said.

“At the same time, the fleet exists in an invisible, but very tight connection with other types of the Armed Forces.

The effectiveness of the naval forces is an important indicator of the country's development, Yuri Knutov emphasized, in turn.

“Russia has taken a special path in the development of the fleet, in particular, it has relied on such high-precision and hypersonic missile weapons as“ Caliber ”,“ Onyx ”,“ Zircon ”and, as a result, new small missile boats, frigates, including ocean zones. Despite the fact that the Russian fleet is smaller in size than during the Soviet era, it surpasses many of the world's naval forces in terms of technical equipment and ability to solve combat missions, ”the military expert concluded.