Container town and the search for barbed wire: how Lithuania is trying to cope with the influx of migrants

Lithuania is preparing to receive up to 40 thousand illegal migrants from Africa and the Middle East, who follow to the EU through Belarus. This was stated by the head of the State Border Guard Service, Rustam Lyubaev. In the Shvenchensky district, it is planned to create a container town on a site of 16 hectares. In turn, the Deputy Minister of Internal Affairs of Lithuania Arnoldas Abramavicius said that the country does not have enough barbed wire to create barriers on the border with Belarus. According to experts, although Minsk is blamed for the problem in Vilnius, the situation arose due to the unbalanced migration policy of the EU. 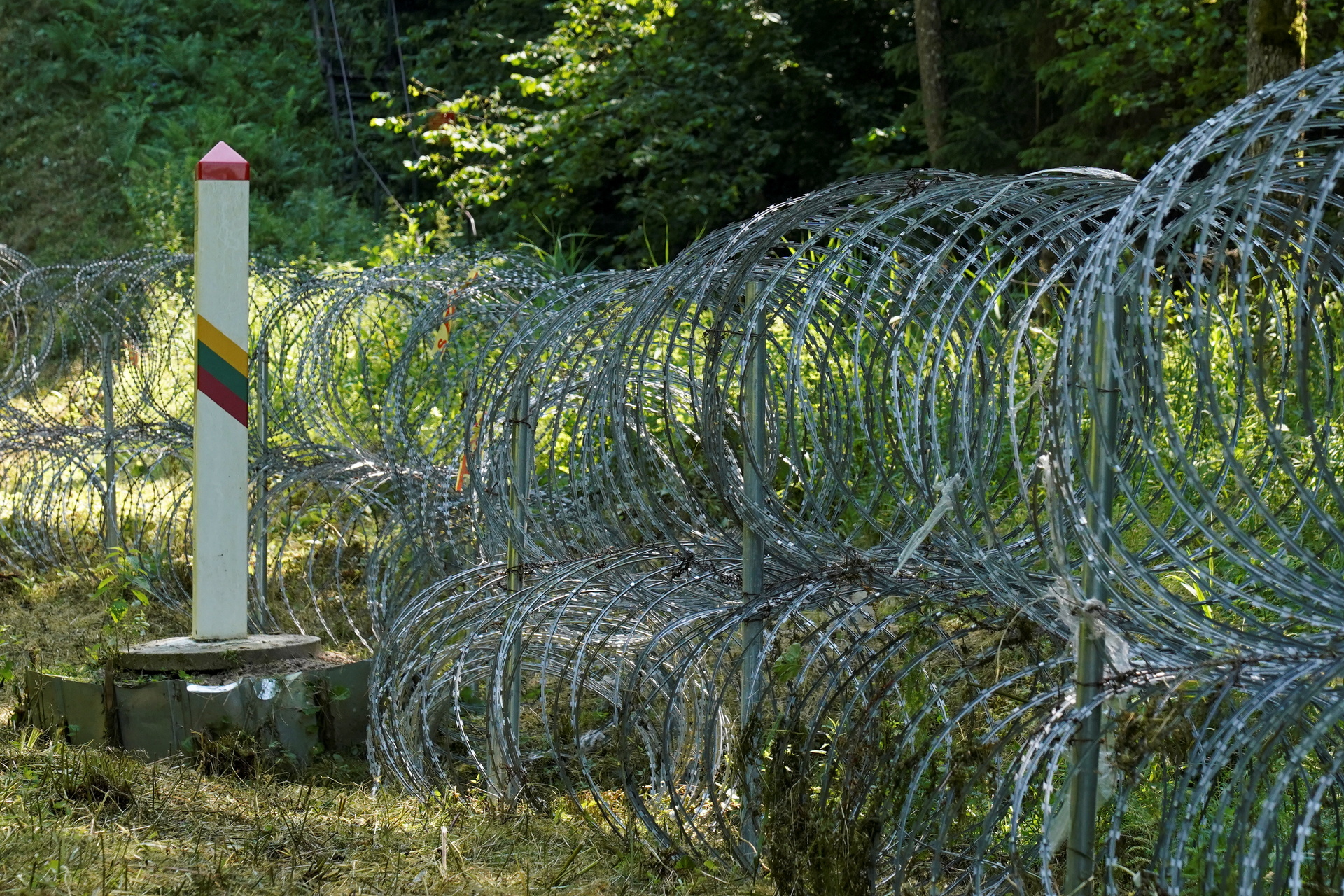 In Lithuania, in the coming days, an influx of about 40 thousand illegal migrants is expected to travel to the EU via Belarus.

The head of the Lithuanian State Border Guard Service, Rustam Lyubaev, spoke about this.

According to him, a container town will be equipped to accommodate migrants in the Shvenchensky district.

“The situation at the border is difficult to predict.

We do not know when and how many houses will be required ... We must be ready for any option.

The worst-case scenario is 40 thousand migrants, we must be ready for this, ”the Delfi edition quotes Lyubaev.

The head of the State Border Guard Service also added that the funds needed for the construction are currently being coordinated with the Ministry of Finance.

As noted by the director of the administration of the Shvenchensky district administration Jovita Rudeniene, an area of ​​16 hectares in the village of Augustavas has already been allocated for the town.

“There are abandoned buildings with running water and sewerage.

There is an electrical substation nearby, ”explained Rudenienė.

In the meantime, 484 refugees have been accommodated in the Shvenchensky region.

Meanwhile, the Ministry of Internal Affairs of Lithuania said that the country has a problem of shortage of barbed wire for the construction of barriers on the border with Belarus.

“Material is needed to build a fence.

According to him, concertina (a type of barbed wire), which is used for construction, is not produced in Lithuania.

In this regard, we are talking only about its purchase in other EU countries, but the difficulty is created by the fact that the material belongs to the military nomenclature.

"Therefore, it is impossible to share it just like that, this is due to special procedures," the deputy minister added.

Earlier, the Lithuanian authorities announced their intention to install a barbed wire fence on the border sections with a length of about 550 km.

Thus, they expect to physically stop the flow of migrants.

€ 4.8 million has been allocated from the government reserve for the construction of a barbed wire fence. Currently, a 500 m long barbed wire fence has been installed in the area of ​​responsibility of the border outpost in Druskininkai.

However, despite the measures taken, the flow of migrants is not weakening, in connection with which local residents began to express dissatisfaction with the actions of the authorities.

So, in the town of Diveneškės with a population of 700 people, they declared their unwillingness to place about half a thousand illegal migrants on their territory.

As a result, the residents achieved a postponement of the opening of the center for the reception of illegal immigrants.

“Today both sides decided to pause, we will not deliver migrants yet,” President Advisor Kestutis Lančinskas confirmed this information to the LRT.lt portal.

Trying to avert a crisis

Due to the uncontrolled arrival of illegal migrants, the Lithuanian Sejm had to urgently change the migration legislation.

In particular, amendments were adopted that reduce the time for consideration of an application for asylum to ten days, and also restrict the freedom of movement of migrants in the country pending a decision on their applications.

In addition, the European Border and Coast Guard Agency Frontex has already promised assistance to Lithuania.

From his side, additional forces of border guards and patrol cars will be sent to Vilnius.

The support of Lithuania in the humanitarian sphere has already been announced in Riga.

“The Latvian government has decided to provide humanitarian aid to Lithuania in order to help overcome the crisis of illegal migration on the Belarusian-Lithuanian border.

Our full solidarity and support to our Lithuanian friends in solving this growing problem, ”- wrote on Twitter the Minister of Foreign Affairs of Latvia Edgars Rinkevich.

The Government of #Latvia has decided to provide humanitarian assistance to #Lithuania to help to tackle illegal migration crisis at the Belarusian-Lithuanian border.

However, as experts note, the current tense relations between Lithuania and Belarus hinder the solution of the problem of illegal migration, in particular.

According to the director of the Center for the Study of Integration Prospects, Sergei Rekeda, a weak spot in the EU border guard has arisen due to the fact that now there is no official interaction between Lithuania and Belarus on any issues, including migration, political relations are actually frozen.

“This situation has arisen due to the fact that Lithuania, after the last presidential elections in Belarus, refused to recognize Lukashenka as the country's legitimate leader.

At the same time, with Svetlana Tikhanovskaya, whom Lithuania and other European countries recognize as the leader of Belarus, the Vilnius authorities cannot resolve this issue due to the fact that she only nominally accepted the status of president, "Rekeda explained in a conversation with RT.

Thus, he noted, until Lithuania changes its attitude towards the Belarusian leadership, it will not have official tools to discuss the problem and find a solution.

However, as analysts emphasize, it is not worth pinning hopes only on warming in relations between countries.

According to political scientist Alexander Asafov, the problem can be resolved only through changes in European legislation.

"In general, an important role in this process is played by European laws regarding migrants, which are not balanced and, as a result, suffer from Germany and a number of other countries," the political scientist expressed his opinion in an interview with RT.

At the same time, Lithuania regularly blames Belarus for the influx of migrants.

In particular, the head of the country's Foreign Ministry Gabrielus Landsbergis said that Minsk uses illegal immigrants as a "political weapon".

This should not go unanswered.

We call on the EU to adopt the fifth package of sanctions against the Lukashenka regime, ”he said on July 12.

In Belarus, all claims of Lithuania are rejected.

As the head of state Alexander Lukashenko explained earlier, Belarus is engaged in the fight against illegal immigrants, "but only as much as necessary is beneficial ... for the country and financially possible."

“But if someone thinks that we will now close the border with Poland, Lithuania, Latvia and Ukraine and turn into a settling tank for refugees from Afghanistan, Iran, Iraq, Libya, Syria, Tunisia, then he is simply mistaken at least.

We will never keep anyone: they are not coming to us.

They go to an enlightened, warm and comfortable Europe, ”Lukashenka said.

According to him, the influx of migrants was provoked primarily by Western and American policies in third countries.

“They destroyed these countries.

They practically destroyed Afghanistan and pulled out the troops ... And now the Central Asian republics are barely holding back this flow (migrants. -

Refugees have appeared ... They just want to turn Belarus into a settling tank ... But this will not happen after the policy that is being carried out in relation to Belarus and Russia, ”the Belarusian president emphasized.

A similar point of view in an interview with RT was expressed by the head of the Belarusian Foreign Ministry Vladimir Makei.

According to him, the sanctions policy towards Minsk turns against the EU itself.

“If they (the collective West and various financial institutions. -

) stop financing various mutually beneficial projects in Belarus, impose sanctions, even sectoral ones ... Let them not be offended that migrants ran to them, because we are the funds that were previously allocated for stricter protection of borders, we will transfer to the needs of ordinary people, ”explained Makei.

In turn, the official representative of the Russian Foreign Ministry Maria Zakharova called the accusations against Belarus ridiculous.

“It is ridiculous to hear the groans of the European Union, Brussels and individual countries of this association regarding a certain migration threat that comes from Belarus.

These are absurd statements, absolutely absurd, considering what the Western countries have created, organizing coalitions and carrying out crusades, in particular to the countries of the Middle East and North Africa, ”she said.

Analysts also note the fairness of such statements.

According to them, it was the ill-conceived policy of Western countries together with the United States in the Middle East that led to the emergence of illegal migrants who are now seeking asylum in the EU countries.

“In fact, their invasion did not solve the internal problems anywhere, on the contrary, in this way only new hotbeds of tension were created, because of which the flow of refugees began.

As a result, this policy returned like a boomerang, first of all, to the EU countries, and not to the USA, which are far away and, accordingly, do not feel these problems, ”said Sergei Rekeda.

In this regard, in his opinion, the EU has two ways: to absorb the migration flow within the framework of culturalism or to tighten border protection, to close and get out of hot spots in the Middle East.

In turn, Alexander Asafov believes that only "revision of the internal legislation of the EU" will help to cope with the problem of migrants.

“As for Belarus, the attitude towards it will not change, because Lithuania and a number of other European countries make decisions in the vector of pro-American policy. And as long as Vilnius and the EU countries as a whole build their foreign policy not sovereignly, but with an eye on Washington, such an attitude towards Minsk will persist, ”the expert summed up.