"The plan is absurd": how Ukraine proposes to create a European gas hub after the launch of Nord Stream 2

Ukraine must become a gas hub for Europe in order to maintain the viability of its gas transportation system. This statement was made by the deputy of the Verkhovna Rada from the Servant of the People party Yuri Kamelchuk. According to him, Ukraine can send Turkish gas from Iran or Azerbaijan or liquefied natural gas from Qatar to Europe. Experts note that Kiev fears losses due to a decrease in the transit of Russian gas, but Europe does not need additional hubs in the face of Ukraine. 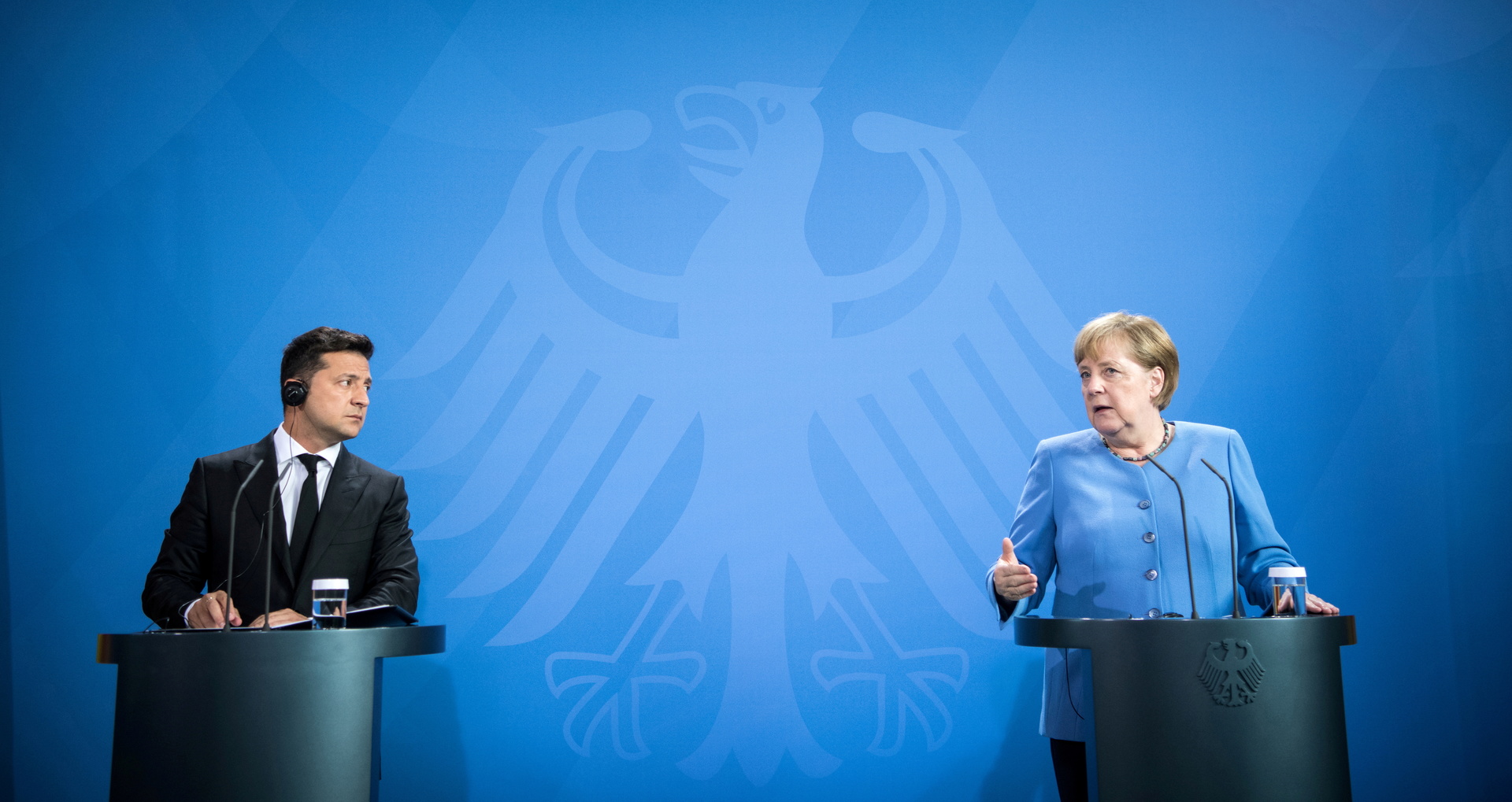 After the commissioning of the Nord Stream 2 pipeline, Ukraine should “become a European gas hub” in order to keep its gas transmission system operational.

This was stated by the deputy of the Verkhovna Rada from the presidential party "Servant of the People" Yuri Kamelchuk.

According to the parliamentarian, without a sufficient amount of fuel, the Ukrainian GTS will cease to function.

“One of the simplest scenarios for what we can do is to become a gas hub for Europe using other gas pipelines.

According to Kamelchuk, "nothing at all interferes with the implementation of this plan."

Recall that Kiev has consistently opposed the construction and commissioning of the Russian gas pipeline "Nord Stream - 2".

In early June, Ukrainian President Volodymyr Zelenskiy said that after the gas pipeline was launched, his country would lose about $ 3 billion a year.

Nord Stream 2 will disconnect Ukraine from gas supplies, which means it will “disconnect” us from at least $ 3 billion a year ... We will have nothing to pay for the Ukrainian army, ”Zelensky said.

To date, the construction of the Nord Stream 2 gas pipeline, with a capacity of 55 billion cubic meters of gas per year, has been completed by 98%.

In addition to Ukraine, the United States and Poland actively opposed the implementation of the project, calling it political.

During the Donald Trump administration, Washington has repeatedly imposed sanctions against companies involved in the construction of the pipeline.

The authorities of Germany and Austria have repeatedly stressed that Nord Stream 2 is a purely commercial project and is necessary to supply European countries with energy.

With the coming to power in the United States of the Joe Biden administration, Washington continued to make statements about opposition to the project.

However, in May, White House spokeswoman Jen Psaki said that, despite the imposition of sanctions against ships and companies involved in laying the pipeline, Washington could not stop the construction of Nord Stream 2.

In early June, US Secretary of State Anthony Blinken said the completion of the pipeline was a "fait accompli."

The head of the State Department stressed that Washington, unable to stop the project, decided not to follow the path of further deterioration of relations with its ally in the person of Germany, which has invested huge funds in the construction.

At the same time, Politico, citing sources in the Biden administration, reported that the White House asked Ukraine to refrain from criticizing Nord Stream 2, as this could harm bilateral relations between Washington and Kiev.

In turn, German Chancellor Angela Merkel has repeatedly stated that the completion of the project will not mean a complete stop of gas transit through Ukraine.

She voiced this position once again on July 13 during a joint briefing with Ukrainian leader Volodymyr Zelensky.

“For us, Ukraine is and will remain in the future a transit country, even after the completion of the construction of Nord Stream 2.

The Ukrainian side has great concerns about this, which we take very seriously.

The European Union and Germany will ensure that the current state of affairs continues after 2024, ”Merkel said.

Let us remind you that on July 21, the US State Department and the German Foreign Ministry issued a joint statement in which they actually approved the completion of the construction of Nord Stream 2.

Legally, it does not oblige you to anything, but it caused an extremely negative reaction in Ukraine.

A joint Ukrainian-Polish statement was published on the website of the country's Foreign Ministry, in which Kiev and Warsaw condemned the US refusal to try to stop the launch of the gas pipeline.

It also noted that the agreement between Washington and Berlin allegedly creates additional political, military and energy threats for Ukraine and Central Europe as a whole.

In turn, the chairman of the board of the national joint-stock company Naftogaz of Ukraine, Yuriy Vitrenko, while in Washington on July 23, said that Kiev would insist on the need to impose sanctions against the Nord Stream 2 operator.

“We have carefully read the joint statement of the American administration and the German government.

We see that the problems and challenges facing Ukraine, primarily in terms of security, remain - at least for now - unanswered.

Therefore, we continue to explain that as long as Russia (Putin) uses gas as a geopolitical weapon, until then, American sanctions, without exception, should be applied, in particular, against Nord Stream AG and other key participants in this project, ”Vitrenko told reporters.

Russia has repeatedly stated that it does not plan to stop gas transit through Ukraine after the launch of Nord Stream 2.

On July 23, the chairman of the board of directors of Gazprom, Alexey Miller, once again confirmed that the company was ready to continue transit after 2024, as stipulated by the existing agreement with Kiev.

According to Miller, the Russian side may even increase the volume of supplied gas.

“The issues of new volumes of gas purchases from Russia for transit through the territory of Ukraine should be resolved on market conditions and at market prices.

For the volume of new purchases of Russian gas via the Ukrainian route, in total, higher than the current transit obligations, "Gazprom" is even ready to increase the volume of transit through Ukraine, "he said.

At the same time, the head of Gazprom stressed that the fuel supply route through Nord Stream 2 to Germany is almost 2,000 km shorter than through the Ukrainian GTS.

In turn, Russian Deputy Foreign Minister Alexander Grushko explained that maintaining the transit of Russian gas depends on the availability of demand for it.

“According to the leading world agencies, the demand for gas will only increase.

In fact, this is what the end consumers should be guided by, ”RIA Novosti quotes him.

At the same time, the diplomat noted a contradiction in the rhetoric of Ukraine, which simultaneously with the demand to preserve transit states the need to achieve energy independence from the Russian Federation.

“This is despite the fact that Kiev itself ... quite recently boasted of its ability to use the Ukrainian gas transportation system in a reverse mode, that is, not from east to west, but from west to east,” Oleksandr Grushko recalled.

According to Denis Denisov, director of the Institute for Peacekeeping Initiatives and Conflictology, the plan to create a gas hub in Ukraine is difficult to implement.

“In addition, Germany and the United States have repeatedly stated that they will seek to preserve Ukraine precisely as a transit partner.

In this respect, the situation looks more real in which Berlin will create certain conditions for the use of the Ukrainian GTS.

Thus, the Ukrainian budget will somehow be replenished.

In reality, Europe does not need such a gas hub in the person of Ukraine, ”the political scientist believes.

In a conversation with RT, President of the Ukrainian Analytical Center Oleksandr Okhrimenko noted that Kamelchuk discovers a lack of basic knowledge about how the global gas transportation system works.

“On the whole, his plan is quite absurd.

Nevertheless, the transit of blue fuel through Ukraine will continue after 2024, Oleksandr Okhrimenko believes.

“But now this hysteria on the part of Kiev is intended to demonstrate dissatisfaction with the achievement of an agreement between the United States and Germany on Nord Stream 2,” concluded the interlocutor of RT.