Tuomo Ylipulli is remembered for these feats - Matti Nykänen was sent home from Hill Week, and then the star moment of his career came

Matti Nykänen was strongly involved in the highlights of Tuomo Ylipull's career - but in very different ways. 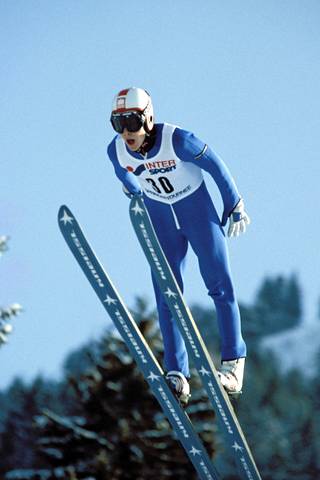 Tuomo Ylipulli, who died of an illness on Friday, won the team gold Olympic gold in Calgary in 1988 and the World Championship gold in Seefeld in 1985 and Oberstdorf in 1987 in his hill jumping career.

Tuomo Ylipull's style sample in Oberstdorf in the last days of 1982.

Each team included the best hill jumper of all time, Matti Nykänen.

Nykänen also played a big role in the biggest personal achievement of Ylipull's career - albeit in a rather special way.

During the Central European Hill Week, which jumped at the turn of the year 1986-87, Nykänen's jumps did not go as expected, but this was 15th in Oberstdorf and ninth in Garmisch-Partenkirchen.

After two competitions, Nykänen was sent to his native Finland.

This dramatic event gave other Finns room to rise to the limelight.

Ylipulli took the opportunity to win the final round of the tour in Bischofshofen.

Due to poor conditions, the race was a one-round stunt race.

- That victory was a great thing.

I had been in good shape all season, but the games didn't always go as well as they could have, Ylipulli recalled in Ilta-Sanomat in 2017.

The Finnish team celebrated the Calgary Team Hill Olympic gold in February 1988. Jari Puikkonen (left), Ari-Pekka Nikkola, and Tuomo Ylipulli have raised Matti Nykänen, who won their third gold medal at the Games, to their own heights.

Just over a year later, in February 1988, the second highlight of his career came.

The Calgary Olympics hill jumping grounds were built in an old residential area of ​​the Indians, whose name at least seemed homely: Paskapoo.

The overburden had to wait a long time for its own race.

He only participated in the team hill race, which was postponed several times due to bad weather.

The Chinook wind had warmed the air so that the team hill was operated at a temperature of about fifteen degrees.

After the opening round, Finland led the race with a difference of 11.4 points to Yugoslavia.

In the second round, Ylipulli jumped third from the Finns, 102 meters.

In the intervening days of the competitions, the Finns who ordered cowboy hats for themselves finally celebrated gold quite modestly.

For the overcrowded, however, the victory came, so to speak, at the time of the count.

He ended his international career as early as March 1988, finishing ninth in his last World Cup competition in Lahti.

Gold medalists on the Calgary Team Hill with medals and flowers.

In 1985, he placed seventh in the World Championships in Aircraft and a fifth a year later.

At the Oberstdorf World Championships in 1987, Ylipulli was tenth on the big hill and seventh on the normal hill.