Voghera. Today the request for validation of Adriatici's arrest is expected

Meanwhile, the results of the autopsy on Youns El Boussetaoui are awaited to try to shed light on what happened. The victim's sister: "Murderer at home, where is the law in Italy?" 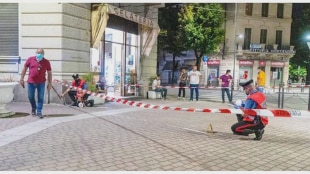 July 22, 2021 "The autopsy of Youns El Boussetaoui was carried out yesterday without informing his family members, all Italian citizens and with a residence, as it should have happened." This was stated by the lawyer Debora Piazza who assists the father, brother and sister of the 39-year-old of Moroccan origin killed yesterday with a gunshot by the councilor for security of Voghera Massimo Adriatici, accused of 'culpable excess of legitimate defense'. El Boussetai, who had manifested mental problems in recent months, told his family that he felt 'at home' in Piazza Meardo, in Voghera, where he died. Here, he told his relatives, he had 'his bench' and his points of reference and was known by everyone

Youns El Boussetai allegedly underwent a Tso (compulsory health treatment) three weeks ago. Agi learns this from sources close to the family. The mental problems the man suffered from had worsened following the lockdown. El Boussetai had frequent contact with his family members, all Italian citizens, who lived in other cities. The father in Vercelli, the sister, who arrived in Voghera, France last night, another brother in Switzerland. His wife and two children live in Morocco.

In terms of investigations, today the request for validation of the arrest of Adriatici by the Pavia Public Prosecutor's Office is expected. 'Which, however, may not also be accompanied by the request for validation of the precautionary measure of home arrest. This means that the prosecutors could give the ok for the return to human freedom, a non-binding opinion for the investigating judge who will be called to decide after hearing Adriatici. The new interrogation, after the first one immediately after the fact, should be set for tomorrow.

Sister Youns El Boussettaoui: "Murderer in his home, where is the law in Italy?"

"I am the sister of Youns El Boussettaoui killed yesterday, they shot him in the square in front of many people. The killer is at his house, he sleeps well rested. Where is the law in this Italy? Can you explain it to me? What? My brother had no weapon, first. Two, he (Massimo Adriatici) is a lawyer, not a policeman. What does he do with a loaded gun? What does he do? ". These are the first words of the victim's sister. "I -said the woman- I don't know anything. I don't know anything, I just know that my brother is gone and the killer is sleeping at his house, it's not legal and it's not fair. All of Italy he must know that it is not legal and it is not fair. But damn, for a minimum thing the person has to be arrested, he killed him and he is at his house. "

It is true that my brother "sleeps on the benches: sometimes - he said - he sleeps on the benches" and "we have taken him home many times. He prefers, he feels more comfortable sleeping on the benches. The other day the other day. he saw my husband, he came to get him. " The woman remembers trying several times to help her brother. "We called the carabinieri in Livorno Ferraris, they can testify. We took him to the hospital but he escaped from the hospital. The carabinieri of Livorno Ferraris called the carabinieri of Voghera to be able to take Youns, not because it hurts someone, it is for him, to defend my brother, so he doesn't sleep on the street, he doesn't eat rubbish. He didn't beat him, he killed him. My brother has two children, two children. One is eight years old and the girl is five.How does he stay at his house? Where is the law? But are we in Italy or in a forest? ".

The sister finally denies that her brother was a molester. "That's not true, that's not true. Who harassed? What did my brother do to the lawyer to kill my brother? Did he have a rifle, did he have a gun in my brother's hand? Answer me! No, my brother didn't have any guns in hand. He was killed in front of people and this person is in his house. I want to know - he concluded - if here in Italy killing or shooting is a legal thing ".

Salvini: "It's normal to shoot with a gun if you have a gun license"

"If you have a gun permit, as happens to 1.3 million Italians certified by the Police Headquarters and Prefecture, yes": it is normal to have a gun with you. The leader of the Lega Matteo Salvini said this at Agorà Estate on Raitre, replying to the conductor, about what happened in Voghera, who supported the thesis according to which it is not normal for a citizen, even with

legitimate gun license, he can go to the bar with the gun in his pocket "So if you take it out on the Quaestors and the Prefects of half of Italy - replied Salvini - who after long and severe analyzes grant the license to carry firearms, which - however the leader of the League underlined - is always the last of the ways I am happy that thanks to the insistence of the League the police forces from next autumn can finally be equipped with the Taser, the electric gun, as happens all over the world. We were the last country in the world with the forces of order without an electric gun ", added Salvini.

"I want to disarm the criminals and then the trial is up to the authorities. If it is a question of self-defense, as we read today in some newspapers, then someone will have to apologize to this councilor. Then it is curious to read that he is a 'councilor of the League' . If he had been a councilor of the Democratic Party, I would be curious to know, if you had set up the same preventive process "continued the secretary of the League.

The opposition to the Voghera City Council is considering whether to present a motion of no confidence addressed both to the mayor Paola Garlaschelli and to the councilor for safety Massimo Adriatici, arrested for having fatally wounded a 39-year-old Moroccan. This was reported by the group leader Pd Ilaria Balduzzi. "We are speaking with all the members of the opposition to request an urgent convocation of the City Council and present a motion on the events that occurred".

Motion that - according to the opposition exponent - could also be of no confidence, towards both the mayor and the councilor (already self-suspended), since the municipal council regulation provides that the mistrust is joint for first citizen and members of the junta. "What happened shocked me deeply. And it also shocks me that the political force to which I belong, the Lega, immediately ran for cover to attribute self-defense. Investigations will have to run their course, but I have been continuously since this morning. I ask if Voghera is a city in which a person, even more the councilor for security, has to go out armed and with a shot in the barrel ready to fire ", observed the group leader dem.

"The mayor - continued Balduzzi - will have to respond quickly in the City Council about what happened, also because the councilors with 'problems' are starting to be a bit too many: one (Francesca Miracca, councilor for Commerce, ed) is under investigation for corruption electoral, and now we have a serious crime involved like killing a person ". "The mayor must come to answer in the city council, because the management of her own council is escaping her, which in any case she has chosen", concluded the group leader Pd.