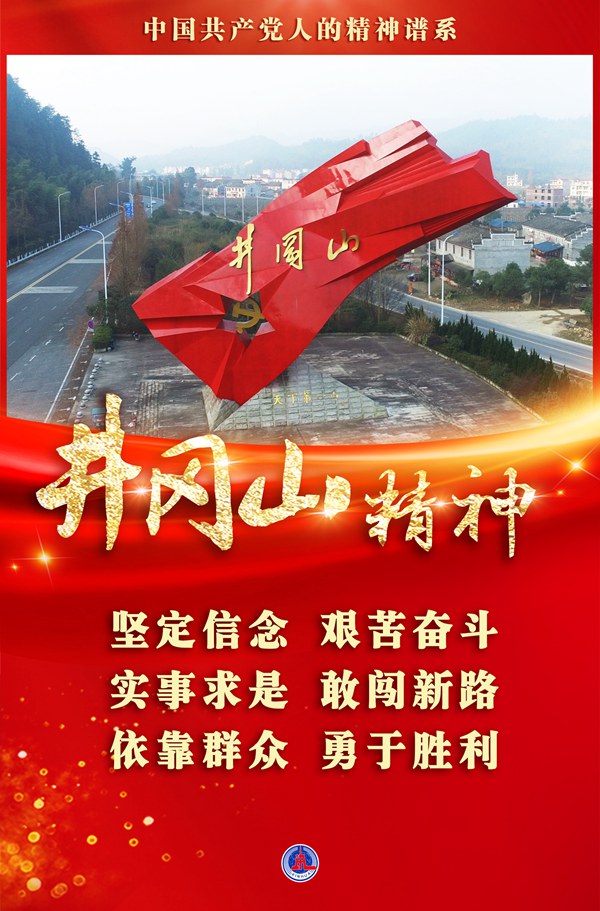 A Century of Struggle to Set Sail a New Journey·The Spiritual Pedigree of Chinese Communists｜This light, illuminates the way forward--Comments on the spirit of Jinggangshan

More than 90 years ago, the octagonal building in Maoping, Jinggangshan.

The shimmer of a wick penetrated the long night.

This is the former residence of Mao Zedong in the Octagonal Tower, Maoping, Jinggangshan (photographed on September 26, 2017).

The two brilliant works of "The Struggle in Jinggangshan" have become the great opening chapters of the Sinicization of Marxism, shining with the spirit of Jinggangshan of "firm conviction, hard work, seeking truth from facts, daring to break new roads, relying on the masses, and being brave to win".

This light guides the Communist Party of China across thousands of rivers and mountains and creates a century of glory; this light spans time and space and radiates a new era of light.

Imposition photo: This is a collection of smiling faces of villagers in Shenshan Village, Jinggangshan City, Jiangxi Province (taken on July 15, 2020).

In the darkness, the Chinese Communists ignited the fire that led China to the light.

After the failure of the Great Revolution in 1927, the Nanchang Uprising and the Autumn Harvest Uprising suffered setbacks.

Although some were pessimistic and disappointed, some left without saying goodbye, and some rebelled against the enemy, the steadfast communists still carried the torch forward, firmly believed that a single spark could start a prairie fire, and resolutely united and fought under the red flag of Jinggangshan.

Lu Deming, the commander-in-chief of the Autumn Harvest Uprising, was 22 when he died;

Zhang Ziqing, commander of the 11th Division of the Fourth Red Army, 28 years old when he died;

Wang Erzhuo, Chief of Staff of the Fourth Red Army, was 25 when he died;

This is the Jinggangshan Revolutionary Martyrs Cemetery (taken on September 26, 2017, UAV photo).

Rows of martyrs' names are engraved in the hall of tribute to the Jinggangshan Revolutionary Martyrs Cemetery.

In just two and four months of struggle in Jinggangshan, more than 48,000 people died, and an average of nearly 60 people gave their lives every day.

Because of their faith, the revolutionary ancestors were willing to throw their heads and blood.

Life is limited and faith is eternal.

In February 2016, General Secretary Xi Jinping pointed out during a survey in Jiangxi that Jinggangshan is the cradle of the Chinese revolution.

Today, we must combine the conditions of the new era, persist in pursuing ideals, seeking truth from facts, breaking new paths, struggling hard, relying on the masses for victory, and letting the spirit of Jinggangshan radiate a new era.

Belief is like light, and those who fight for it are light chasers.

In the fight against poverty, more than 1,800 party members and cadres across the country, including Zou Qisheng, secretary of Zhuxi Village, Suichuan County, an old revolutionary base in Jinggangshan, died.

A series of successive failures at that time proved that the city-centered revolutionary road was simply not feasible in China.

Where is the road to revolution?

Give up attacking the city and move to Jinggangshan!

This step taken by Mao Zedong became a brand new starting point for the Chinese revolution.

Seeking truth from facts and dare to break new paths are the core of Jinggangshan spirit.

This is true for the revolution, and so is the construction and reform. We must proceed from reality and dare to open a path that no one has traveled before.

In February 2017, Jinggangshan City officially announced that it took the lead in poverty alleviation in the country and became the first impoverished county to alleviate poverty after the establishment of the poverty withdrawal mechanism in my country. The history of Jinggangshan opened a new chapter.

The original heart is like a rock, and forge ahead. In the past 100 years, the Chinese Communist Party has led hundreds of millions of people to open up a new voyage in the rapids of the rapids and embark on a broad road of socialism with Chinese characteristics.

General Secretary Xi Jinping pointed out: "The continuous development of the path, theory, system, and culture of socialism with Chinese characteristics has expanded the path for developing countries to modernize, and has provided countries and nations in the world who wish to accelerate development and maintain their independence. The new choice has contributed Chinese wisdom and Chinese solutions to solving human problems."

Standing in 2021 and looking forward to the future, the path towards the great rejuvenation of the Chinese nation will be clearer and firmer ——

Some people say that the Communist Party of China is a party that is getting more and more courageous. It has the magical power to escape danger, and it continues to create incredible legendary achievements.

In Jinggangshan, the Chinese Communists, represented by Mao Zedong, succeeded in accomplishing a great "wonder" during the Kuomintang’s harsh military offensive and economic blockade-"Within a country, surrounded by white political power, there is a small Blocks or several small areas of the red regime have existed for a long time. This is something that no country in the world has ever seen."

Historical experience tells us that the reason why the Chinese Communist Party has created one after another miracle that shines through the annals of history is precisely because of the important "magic weapon" of hard work.

Hard work is the political nature and fine tradition of our party, and it is also the cornerstone of the Jinggangshan spirit.

Jinggangshan City is fully aware that the most prominent shortcomings of Jinggangshan are small fiscal aggregates, low industrial levels, and weak innovation capabilities.

In order to basically realize socialist modernization with the whole province of the whole country, Jinggangshan must accelerate its pace and lay a solid foundation during the "14th Five-Year Plan" period. Therefore, the main development goals during the "14th Five-Year Plan" period are slightly higher than those of Jiangxi Province and Ji'an City. Target requirements.

"These goals not only reflect the striving posture of'jump up and pick peaches', but also conform to the development reality of Jinggangshan. As long as we redouble our efforts, they can be achieved." Jinggangshan City Mayor Jiao Xuejun said.

Today, the Chinese Communist Party has united and led the Chinese people on a new road to achieve the second centenary goal.

The journey is long, and only through tenacious hard work and unremitting struggle can we continue to create new legendary achievements.

Five hundred miles away in Jinggang, the green hills are wild, and the monument to the victory of the Huangyangjie Defence War stands majestically.

In August 1928, the four regiments of the Kuomintang reactionaries attacked Jinggangshan. With the help of the masses in the base area, the Red Army repelled the offensive of nearly 6,000 enemies with less than 300 troops, creating a miracle of winning more with less.

"The balance of power is so disparity, why can the Red Army win this battle?" Many tourists asked.

"The answer lies in the fact that the party and the Red Army have always shared the joys and sorrows of the people, fully mobilized the masses, and built an invincible copper wall and iron wall." The commentator on the side replied.

Closely uniting and relying on the masses is an important magic weapon for the establishment and development of the Jinggangshan Revolutionary Base.

Regardless of the passage of time, always relying on the people and doing everything for the people is the unchangeable true nature of the Communists.

Standing at a new major historical juncture, the great rejuvenation of the Chinese nation will take greater steps forward. The 1.4 billion Chinese people will join hands to enter a modern society and gradually realize common prosperity. This will be a far-reaching event in human history.

"The Communist Party has never used any magic, they only know the changes that the people desire." More than 70 years ago, American journalists Bai Xiude and Jaanna's speech in the book "Thunder of China" were used to explain the people of the Communist Party of China. The position is equally appropriate.

The country is magnificent and the road is bright.

Carrying forward the great party-building spirit and inheriting the immortal Jinggangshan spirit, the Chinese Communists are in an unswerving state of mind and an indomitable attitude of striving to create achievements worthy of the times, worthy of the people, and worthy of their ancestors.