Sven, 90, got three paddle courts as a neighbor: "We feel run over"

When Sven and Lizzie Persson came to the summer cottage in Åhus last summer, they got a shock - a few meters away, three paddle courts had been built. - It's a thumping and thumping. We can barely sit and talk outdoors, says Sven Persson. 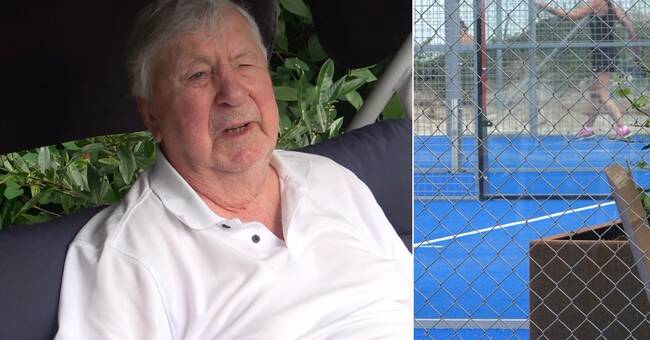 The paddle courts at Täppet in Åhus upset several neighbors, something that Kristianstadsbladet was the first to report on.

Sven and Lizzie Persson have had a summer cottage in Åhus since 1963.

- It has been only positive.

Now it's just misery, says Sven Persson and points to the paddle courts that have been built near the cottage.

The courses can be booked 14 hours a day.

And gambling affects the couple Persson and their closest neighbors.

From the neighbors' plot boundary, it is only two meters to the paddle facility and they even get balls into the garden.

Neither the couple Persson nor the nearest neighbors were given the opportunity to comment on the plans before a building permit was granted, they say.

The director of environmental and community construction in Kristianstad, Tommy Danielsson, says that the decision on the building permit was not sent to the individual cottage owners but to Trampvägen's cottage association and to AB Åhus Sommarstugor.

- The decision stated that the building permit applied to "plank for paddle" but I did not put it together one by one and could not imagine that it would cause any disturbance to the residents, says Jörgen Svensson Dahl, CEO of AB Åhus Sommarstugor.

SVT Nyheter Skåne has unsuccessfully tried to reach someone from Trampvägen's cottage association who wants to comment.

Nowadays, not even a building permit is needed

According to Tommy Danielsson, in future you will not need a building permit at all if you are going to build a paddle court.

- The case law in the country is that you do not actually try a building permit according to the PBL (Planning and Building Act, editor's note) at all - but instead handle any complaints with the support of the Environmental Code, which is better legislation, says Tommy Danielsson.

But is it reasonable for Sven and his neighbors to have paddle courts a few meters from the patio?

- I am sure that they have made those trade-offs internally within the cottage owners' association when they released a paddle court on their property, says Tommy Danielsson who believes that they will find a solution.

The Department of Environmental and Health Protection has assessed the disturbance as extensive.

The company that conducts the paddle business has until 1 October to submit proposals on how to reduce the disruption.

In the video, you get to hear, among other things, what Sven, 90, thinks about paddle playing.