As of today (22nd), heavy rainfall has lasted for many days in Henan. Last night, there was another heavy rainstorm in central and northern Henan. Data from the Central Meteorological Observatory showed that from 8 o’clock yesterday morning to 6 o’clock this morning, there were heavy rainstorms in Anyang, Hebi, Xinxiang, and Jiaozuo, Henan. There were a total of 9 national meteorological observa 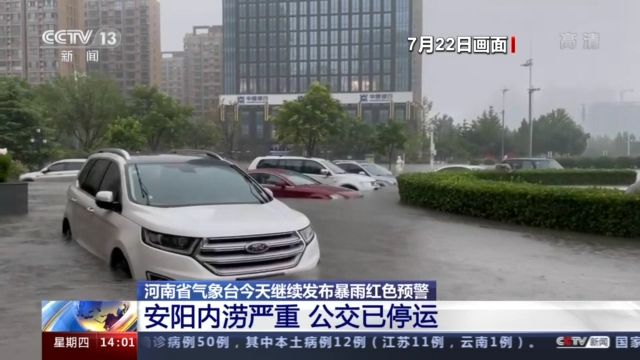 As of today (22nd), heavy rainfall has lasted for many days in Henan.

Last night, there was another heavy rainstorm in central and northern Henan. Data from the Central Meteorological Observatory showed that from 8 o’clock yesterday morning to 6 o’clock this morning, there were heavy rainstorms in Anyang, Hebi, Xinxiang, and Jiaozuo, Henan. There were a total of 9 national meteorological observatories’ daily rainfall. Break through the historical extreme value since the meteorological record.

The local government appealed to citizens not to go out unless necessary and to work from home. At present, public transportation in Anyang City has been suspended.

In addition, the Xinxiang City Meteorological Observatory of Henan Province continued to issue a red warning of heavy rain today.

According to the Xinxiang City Flood Control and Drought Relief Headquarters, Xinxiang City has recently encountered the strongest extreme precipitation process since the local meteorological record.

From 8 o'clock on the 17th to 6 o'clock today, there was a heavy rainstorm in Xinxiang, with a maximum precipitation of 907 mm.

At present, many places in Xinxiang are experiencing waterlogging, and some areas have power outages.

Affected by the continuous heavy rainfall, the current accumulation of water and waterlogging in some culverts, bridges and tunnels in Zhengzhou City is still serious. The problems of traffic, electricity and communication need to be solved urgently.

Zhengzhou City has set out a timetable for rescue work.

Today, we must ensure the restoration of urban transportation, and tomorrow will basically restore power supply. By the day after tomorrow, basic public services such as transportation, power supply, and the network must normally guarantee the basic needs of the people.

The Changzhuang Reservoir and the Guojiazui Reservoir, which are in danger due to rainfall, have initially been effectively controlled.

According to news from the Henan Provincial Emergency Management Department, as of 4 o'clock today, heavy rainfall has caused 3.004 million disasters in 103 counties (cities, districts) in Henan Province in 877 townships, 33 people were killed and 8 people were missing.

The affected area of ​​crops was 215.2 thousand hectares.

The Ministry of Finance issued an emergency relief fund of 100 million yuan yesterday to support Henan Province in its flood prevention and disaster relief work.

Heavy rainfall has also caused serious waterlogging in many parts of Henan, and railway, highway, and civil aviation transportation have been severely affected.

At present, with the orderly development of rescue and disaster relief work, roads and air transportation are gradually recovering.

These days, the heavy rain belt lasted for many days in Henan. The rain belt began to move northward during the day and brought heavy rain to northern Henan, as well as parts of Hebei and Shanxi.

There were heavy rains or heavy rains yesterday in central and southern Hebei, eastern Shanxi, and western Beijing along the mountains. Shijiazhuang, Xingtai, and Handan of Hebei experienced extremely heavy rains and tornadoes occurred in Baoding, Hebei.

Meteorological experts reminded that Henan and other places have encountered continuous heavy rainfall recently. Although the precipitation has weakened since today, it is still necessary to focus on preventing floods and geological disasters in small and medium rivers and do a good job in flood prevention.

According to the current rainfall situation, the Ministry of Water Resources and the China Meteorological Administration jointly issued a meteorological warning for red flash flood disasters at 18:00 yesterday.