Chinese Youth Says | Wan Qing, Jewelry Designer in France: Bringing Scrap Jewelry to Life   Next to the bustling Paris Concorde, on a street next to the Louvre, there is a quiet and low-key jewelry workshop hidden. The owner of the workshop is a lady from Liaoning, China, named Wan Qing. Some time ago, Wan Qing appeared in a series of fashion magazines, and the media referred to her as "the Chine 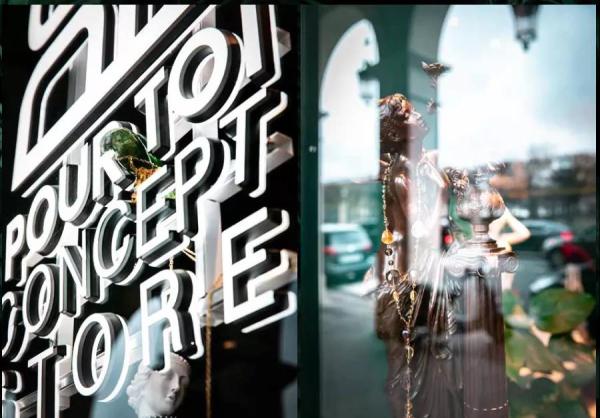 Next to the bustling Paris Concorde, on a street next to the Louvre, there is a quiet and low-key jewelry workshop hidden.

The owner of the workshop is a lady from Liaoning, China, named Wan Qing.

Some time ago, Wan Qing appeared in a series of fashion magazines, and the media referred to her as "the Chinese designer who picked up ragged jewellery in France."

Beautiful designers, why go to France to "pick up the tatters"?

In this issue of "Chinese Youth Talk", Wan Qing is invited to tell her story.

The following is Wan Qing's narrative:

In 2017, after graduating from the Paris Fashion Institute, I opened a small jewelry shop in Paris. While selling all kinds of jewelry, I concentrated on my own creation.

The idea of ​​designing and processing discarded jewellery originally came about because I think our industry is producing too fast, and there are too many fast-fashion products manufactured.

When I put forward this idea, a friend of mine supported me with actions.

She asked me to go to her house to choose a jewellery experiment. When she opened her jewellery cabinet, I was shocked: How could a girl buy so many jewellery!

Then I helped her pick out the jewelry that no longer suits her, and also took a part of it to make the first batch of test products.

I think a lot of people will consume impulsively, and then a lot of things are left in the dust, which is actually a pity.

So I strengthened my original intention to do this.

Sometimes I think, do we really need so many things?

In fact, to recycle some old jewellery (not necessarily antique jewellery) and second-hand jewellery, I just want to stop and think about what else can we do about the current accumulation and waste of materials.

Can the big environment be changed by recycling second-hand jewelry and processing it without producing new items?

My power is too meager. I just hope that through such a move, I can arouse everyone's thinking, at least the next time I have the urge to buy, I can think about what I really need.

The "rebirth" of a piece of jewelry generally involves processes such as recycling, counting, sorting, screening, and gilding.

First of all, we must plan how to recycle, sort out the recycling process, and then carry out enough publicity one after another.

The recovered jewelry must be screened and sorted. The re-gilded parts are then designed and assembled, and pictures are sold after completion.

For small batches, the entire process will take about 1 month.

The "environmental protection line" design we launched this year will almost remain at 200 pieces.

Discuss material selection with the factory

My favorite piece is a pearl necklace from my own bracelet.

The pearls are removed from second-hand pearl necklaces. After years of polishing, they have not been so bright, but with recycled gold-plated chains and pendants, they finally showed a very fashionable effect. I think this is bred in nature. A piece of work that came out.

The best response was a collection inspired by straps.

The watch strap series with the best response

There are a wide variety of customers who come to the store, and both buy jewelry for personal use and as gifts.

I remember that once, a very young French couple came to the shop. The girl chose a ring, and the boy insisted on paying for it. Then the two kissed for a long time at the door of the shop.

I think this is a way of expressing love. After that, this ring will no longer be an ordinary ring, but will carry the memories between the two of them.

There was another guest. I asked her when I was packing, "Do you need gift wrapping? Is it for a friend? Then the French woman replied, "I need wrapping, but I gave it to myself.

"I think jewelry carries a part of people's heart. Whether this jewelry is for a friend or self, it carries love.

In 2020, due to the new crown pneumonia epidemic, the business of Xiaodian was fatally hit.

My shop has been closed for more than six months, and everything is fine except that I didn't make any money.

The beauty-making industry seemed so weak and redundant before the epidemic.

But France is such a romantic and magical country-many neighbors will specially come to buy a small item, as if it is a "little luck" under a heavy life, a rose in the war, although useless, it is given to others hope.

After several lockdowns of the city, I unexpectedly had a lot of time to try to repair some damaged and old jewelry, re-gild, redesign, and want to do something that can give people hope at this time.

Looking back on the life along the way, there is nothing extraordinary, and there is no "glorious reversal" or "shocking counterattack", but I have witnessed my growth.

When I arrived in France, I was 23 years old. I was ignorant, confused, and shy. Everything I faced was completely strange, a strange airport, a strange country, and I couldn't even find anyone I knew.

Later, I was busy with my studies and tried to start my own business. Through this study and test, I found that I gradually became mature and stable, and I could be alone when my career needed me.

I think this is the most precious asset in life.

Now, my life in France is ordinary and simple, but my attitude towards life is full of enthusiasm. I hope to inject my love of life into every little thing. Live every day of your life to your heart's content. Whether it's work, life, love or self-love, you will fill it up and treat it with your heart. (Source of manuscript: China Overseas Chinese Network WeChat Official Account, ID: qiaowangzhongguo, source of video and pictures: Wan Qing, Huangzhi LSDM interview/editor: Li Mingyang)