Pegasus scandal, even Macron in the list of spied on?

The Elysée: 'It would be very serious'. The WHO chief is also in the sights&nbsp; 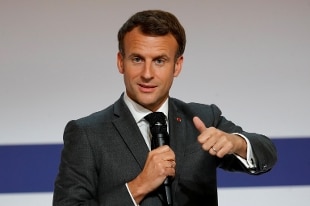 21 July 2021The Pegasus scandal widens: after the journalists, in the list of telephone numbers to be hacked through the spyware of the Israeli Nso appear those of as many as 14 heads or former heads of state and government, including the French president Emmanuel Macron and the former Belgian Prime Minister Charles Michel, current President of the European Council. Among the names of the personalities potentially targeted is that of the director general of the World Health Organization, Tedros Adhanom Ghebreyesus.

This was revealed by the seventeen media coordinated by the non-profit journalism consortium Forbidden Stories, including Le Monde, the Guardian and the Washington Post.

From the latest revelations it emerges that among the possible targets of the hackers there are at least three presidents and three heads of government currently in office, seven former premieres and the sovereign of Morocco. In detail, in addition to Macron and Michel, the list includes the president of Iraq Barham Salih, the president of South Africa Cyril Ramaphosa, the prime minister of Pakistan Imran Khan, that of Egypt Mostafa Madbouly and that of Morocco Saad-Eddine El Othmani.

Also present were some former prime ministers, including that of Lebanon Saad Hariri and that of Uganda Ruhakana Rugunda. To complete the list also the king of Morocco Mohammed VI, the former president of Mexico Felipe Calderon and the US diplomat Robert Malley, former chief negotiator at the table of the nuclear agreement of the  Iran of July 2005.

According to what was reconstructed, among the governments that would have used the program sold by the NSO under the control of the Israeli government there would also be those of Hungary, Morocco, Saudi Arabia and the United Arab Emirates.

The reaction from the Elysée was very harsh, after Paris had already announced the new revelations hours before the opening of an investigation into the matter, speaking of the Pegasus case as an "insult to privacy" conducted by a "criminal association". "If the facts that emerged were to be confirmed, it would obviously be very serious", writes the French president's palace, confirming in fact the rumors about the possible espionage against Macron. "Full light will be shed on these press revelations", continues the note from the Elysée.

Meanwhile, Brussels has also started its checks on the use of the NSO software for espionage actions, defining the findings as "unacceptable". "The Commissioner for the Internal Market Thierry Breton will ask the services of the EU Commission to work on the matter", said the head of EU Justice, Didier Reynders.