More than 50 countries and 50,000 people are involved! What is the origin of Israel's "strongest spyware"?

Chinanews, July 20th, a comprehensive report, recently, a list of 50,000 mobile phone numbers related to Israel's NSO group was exposed, allowing a spyware that can be used to monitor the whereabouts of people from all walks of life surfaced. At the same time, it has raised concerns in the international community that surveillance technology may be used improperly to illegally violate human righ 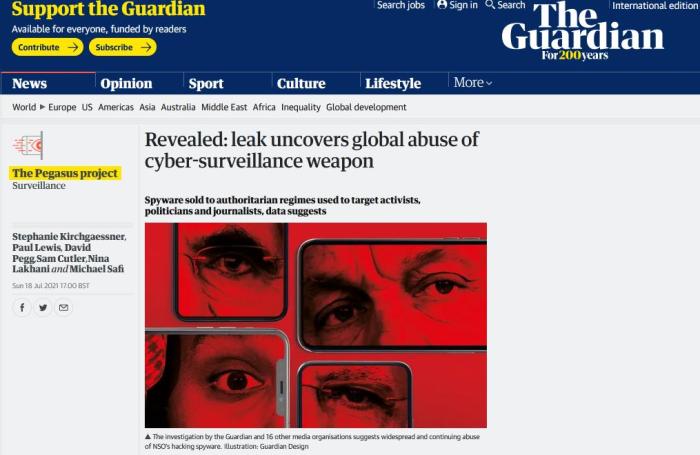 Chinanews, July 20th, a comprehensive report, recently, a list of 50,000 mobile phone numbers related to Israel's NSO group was exposed, allowing a spyware that can be used to monitor the whereabouts of people from all walks of life surfaced.

At the same time, it has raised concerns in the international community that surveillance technology may be used improperly to illegally violate human rights, and many parties strongly condemn this.

On July 18, local time, 17 media outlets including the Washington Post, the Guardian and Le Monde jointly disclosed that a piece of spyware called Pegasus had at least 50 percent worldwide Many countries are used to monitor human rights activists, journalists and lawyers.

"Pegasus" was developed by NSO Group, a network technology company headquartered in Tel Aviv, Israel. It can invade Apple and Android operating systems, extract text messages, photos and emails, record calls, and start remotely without the user’s knowledge. The microphone and camera of the mobile phone.

It is not clear how many of these people’s phones have actually been compromised.

At present, the identities of more than 1,000 number owners have been confirmed, including politicians, heads of state, corporate presidents, activists, members of many Arab royal families, and more than 180 people from CNN and The New York Times And reporters from media such as Al Jazeera.

The survey shows that NSO’s customers are concentrated in at least 10 countries, including Bahrain, Kazakhstan, Mexico, Morocco, Azerbaijan, Rwanda, as well as Saudi Arabia, Hungary, India and the United Arab Emirates.

According to the British "Guardian", "Pegasus" may be the "strongest spyware" developed by private companies so far. It can invade the target mobile phone without having to click on the malicious link through the mobile phone holder. Become a "24-hour monitoring device".

NSO Group is located in an office building in Israel.

NSO Group stated that it will investigate the abuse of "Pegasus" spyware by foreign government customers.

He said, "This violates our trust in our customers. We are investigating every allegation, and if we find that something is true, we will take strong action."

The NSO Group seriously questioned the reliability and authenticity of these sources of information, and accused the report of being "full of false assumptions and unproven theories."

The company's customers include 60 intelligence, military and law enforcement agencies in more than 40 countries, but the statement refused to disclose the names of specific countries and agencies.

The analysis pointed out that the latest allegations will further damage the company's image, but it may not be financially harmful.

There are only a few companies on the market that can produce this type of intrusive spyware sold by NSO, and in the absence of large-scale supervision, it is clear that their market will remain active.

The Israeli liberal party Merez Party stated on the 19th that it will ask the Ministry of Defense about the export situation of Israeli spyware.

Many countries deny it is related to "Pegasus"

The United Nations calls for increased monitoring of network activities

European Commission President Von der Lein emphasized that she refused to use Israel's "Pegasus Project" to monitor the actions of activists and journalists.

She said that the matter has not been confirmed and it is still only an allegation.

She added, "But if this happens, it is unacceptable and cannot be accepted."

The Hungarian government denies that the country’s intelligence agencies use the “Pegasus” program to monitor individuals.

The Indian government also denies that it is related to the "Pegasus" software, and has repeatedly emphasized that there is no unauthorized interception by government departments. The government has always had a mechanism to intercept communications, and the central government and state governments will supervise in accordance with national interests. .

On the other hand, the Moroccan government on the 19th condemned the “false allegations” that its security department used the “Project Pegasus” to monitor the phone calls of journalists, and expressed its willingness to provide “true and scientific” evidence.

The Moroccan government also emphasized that “information software has never been obtained to infiltrate communication equipment, and public authorities have not taken such actions.”

The UN High Commissioner for Human Rights Bachelet also issued a statement expressing his extreme shock at the above incident, saying that he "seems to confirm some of the most serious concerns about the possible improper use of surveillance technology for illegal human rights violations."

Bachelet reminded governments that “surveillance methods can only be used for legitimate purposes under very limited circumstances and must comply with the principles of necessity and appropriateness.”