At the International Aviation and Space Salon MAKS-2021, a presentation of the Checkmate light single-engine fighter, which in Russia may receive the name Su-75, took place. The promising aircraft is an initiative project of PJSC "Sukhoi" and belongs to the fifth generation. According to the developer, thanks to its modularity and wide combat capabilities, this vehicle can become a world leader in terms of "price - combat effectiveness". Checkmate is expected to be in demand from overseas buyers. In the next 15 years, it is planned to release 300 fighters. The cost of the novelty will be $ 25-30 million. Analysts expect that the Russian aircraft will compete with the American fifth-generation F-35 aircraft on the international market. 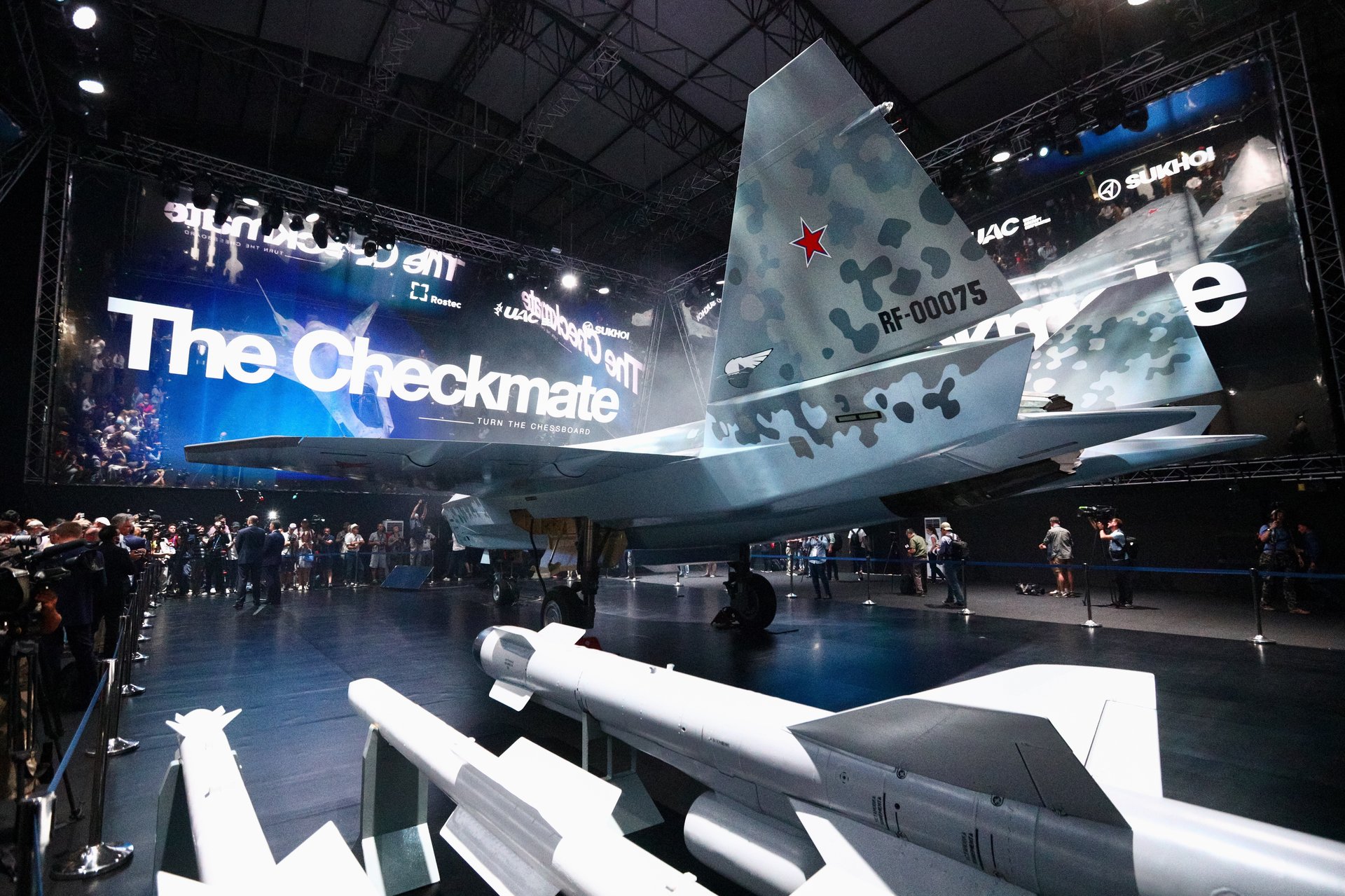 On the sidelines of the International Aviation and Space Salon MAKS-2021 in Zhukovsky, a presentation of the newest light tactical aircraft (LTS) of the Sukhoi company, which may be named the Su-75, was held.

The fighter's trade name for the global market is Checkmate.

First, the car was presented to the President of the Russian Federation Vladimir Putin, and then to the general public.

As the General Director of the United Aircraft Corporation (UAC), Yuri Slyusar, told reporters at the presentation, the Russian company was prompted to create an aircraft by the fact that there are no high-quality single-engine aircraft available on the international market at the price and cost of a flight hour.

“The idea was born from the economy.

The general director of the UAC called the Matryoshka integrated logistics support system one of the ways to reduce operating costs: this service should minimize Checkmate maintenance costs.

Another important competitive advantage of LTS, according to Slyusar, is its "open architecture" (modularity), which allows the customer to choose the required "technical person" of the future combat vehicle.

According to the head of the UAC, Checkmate is a multifunctional platform of a new generation, which is distinguished by the ability to adapt to the needs of a particular customer, low operating costs and broad combat capabilities.

The corporation's business plan sets out the task of producing about 300 units of a new aircraft in the next 15 years.

As Yuri Slyusar noted, the fighter will be offered not only to Moscow's partners in the area of ​​military-technical cooperation, but also to the RF Ministry of Defense.

In an interview with RT on the sidelines of the exhibition in Zhukovsky, the head of Rostec, Sergei Chemezov, said that the cost of the LTS would be $ 25-30 million. According to him, Checkmate will carry powerful missile and bomb weapons and carry out combat missions within a radius of 1.5 thousand km.

According to the manufacturer's calculations, in the near future the aircraft will be able to perform group actions with manned and unmanned vehicles, combined into a single information system.

Checkmate is created on a proactive basis by the specialists of PJSC "Sukhoi".

The fighter should make its first flight in 2023.

All work on the aircraft is scheduled to be completed within four years.

In the future, a drone and, possibly, a carrier-based fighter will appear on the basis of the Su-75.

The main features of Checkmate are a single-engine power plant, widespread use of artificial intelligence technologies and belonging to the fifth generation.

Rostec emphasizes that at the moment there are no analogues of LTS in Russia.

“It combines innovative solutions and technologies, including AI support for the pilot, as well as field proven solutions.

The fighter has low visibility and high flight performance, ”says the Rostec website.

As follows from the materials of the presentation, the maximum mass of the LTS combat load is 7400 kg, the practical ceiling is 16.5 km.

The aircraft can accelerate to Mach 1.8-2.

Checkmate can carry both traditional strike weapons and small drones.

To the advantages of the fighter, the developers include ease of operation, the ability to patrol in the air for a long time, quickly arrive in the area of ​​the mission and quietly go to the distance of guaranteed target destruction.

It is emphasized that the Su-75 will be the leader in terms of the price-combat effectiveness criterion.

Radar with an active phased array antenna allows Checkmate to simultaneously attack up to six objects, including enemy aircraft of the fifth generation.

In order not to spend expensive ammunition to destroy ground targets, LTS will be able to use cannon armament.

The project of the new fighter was not classified, but no details about the progress of work on it were disclosed.

In December 2020, in an interview with reporters, Chemezov said that engineers of the enterprises of the state corporation are working on the concept of a promising single-engine aircraft in the light and middle classes, as well as in the UAV version.

“Indeed, the creation of a future combat aviation system in the light and middle class is being worked out.

By design, it can be a universal platform in manned and unmanned versions.

The concept and tactical and technical requirements for such a complex are being worked out.

So far, we are doing this proactively, without budget funds, ”Chemezov said then.

The power unit installed on the Su-75 has the function of a deflected thrust vector.

The appearance of a single-engine engine on a combat aircraft is an unconventional solution for the domestic engineering school.

At present, all manned aircraft of the Aerospace Forces operational-tactical aviation are equipped with twin-engine installations.

Only a heavy reconnaissance and strike drone S-70 "Okhotnik" flies on a single-engine unit.

From foreign products, the French Dassault Mirage 2000 fighter, the American F-16 and F-35 aircraft fly on one engine.

In an interview with RT, Dmitry Litovkin, editor of the newspaper Nezavisimoye Voennoe Obozreniye, explained that single-engine and twin-engine types of aircraft engines have their own advantages and disadvantages.

“For example, a twin-engine installation is considered more reliable - if one engine fails, it will be possible to continue flying on the second.

In general, the twin-engine unit has a higher lifting capacity and allows a greater distance to be covered.

The single-engine engine, in turn, is more economical.

But these are nuances.

The most important thing is that the aircraft and the engine should be a single well-functioning complex, ”Litovkin said.

In turn, the director of the Center for the Analysis of World Arms Trade (TsAMTO), editor-in-chief of the National Defense magazine Igor Korotchenko, in a commentary to RT, suggested that the choice of a single-engine layout was due to Russia's plans to compete with the American fifth-generation F-35 aircraft in the world market.

“The concept of the aircraft project provides for a single-engine configuration.

This machine will compete with the American F-35 in the appropriate size, geography of deliveries and price range.

Sukhoi is a recognized leader in the military aircraft segment.

Any machines that are created by the specialists of this company meet all the requirements of the market, ”Korotchenko stressed.

Recall that the F-35 Lightning II should become the backbone of the US Air Force and some of its allies.

However, the aircraft production program was significantly reduced, and export difficulties arose.

The main reason for this was the numerous defects revealed during the tests and operation of the fighter in the army.

Another important innovation of LTS is the wide integration of fifth generation technologies.

According to experts, this presupposes the presence of highly automated control systems, low radar signature, widespread use of composites and radio-absorbing materials in the design, and the possibility of placing weapons inside the fuselage.

In an interview with RT, the editor-in-chief of Arsenal Otechestvo magazine, Viktor Murakhovsky, noted that Checkmate was developed on the basis of the scientific and technical groundwork available at Sukhoi and other Russian enterprises that work in cooperation with this design bureau.

“All the stuffing of this aircraft - various units, engine, means of destruction, avionics - these are elements that have been developed, well tested on other models and promising samples of the Sukhoi,” says Murakhovsky.

Analysts are inclined to believe that the fifth-generation fighter Su-57, which is now serially supplied to the Russian Aerospace Forces, served as the main prototype of the LTS and the source of the mass of technical solutions for it.

In addition to the key advantages inherent in the new generation, the Su-57 is distinguished by super-maneuverability, short takeoff and landing, high noise immunity of equipment, a qualitatively new level of protection by passive and active means, a complex of deeply integrated avionics with an open (modular) architecture.

The maximum combat load of the aircraft is 10 tons. According to Russian military pilots, the Su-57 is the only fifth-generation aircraft in the world capable of using strike weapons at any speed and altitude and deviating from the launch line of a missile with a radar homing head.

This quality sets it apart from the F-35.

Dmitry Litovkin believes that the LTS is unified with the Su-57 in many nodes and systems, but is cheaper to manufacture and operate.

The expert does not exclude that the Checkmate project will attract significant foreign investment.

“In fact, today Russia is demonstrating its capabilities to create a light fighter at a fundamentally new qualitative level.

But there is still a lot of work ahead, and, of course, investments will be required.

The Su-57 was also launched with the involvement of Indian resources.

I think that here, too, there will be funds from countries interested either directly in the aircraft itself, or in the technologies that are implemented in it, ”says Litovkin.

Igor Korotchenko also notes the need to carry out work related to the development of the new fighter project.

According to him, the deployment of serial production of Checkmate should be expected after the appearance of a large investor.

“Given the reputation of the Sukhoi aircraft, the new fighter will be of interest to many countries. These are primarily Moscow's traditional partners from North Africa, the Middle East, Southeast Asia and Latin America. These are the potential markets for the new Russian car, ”Korotchenko concluded.