Bottas' Mercedes was third. At the start of the race accident between Hamilton and Verstappen 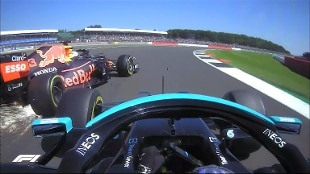 Second was the Ferrari of Charles Leclerc that preceded the other Silver Star of Valtteri Bottas.

Grand Prix marked by an initial accident, with Max Verstappen and Lewis Hamilton wheeling to wheel in the first corners. A challenge that sees the Dutchman of Red Bull have the worst of a contact with the Mercedes of the world champion. The Dutchman goes off-piste and ends up violently on the barriers, without serious consequences. Leclerc's Ferrari takes advantage of it and takes the lead. The safety car immediately enters and then the race is suspended with the red flag. The race restarted with Verstappen in the infirmary for a check and Hamilton penalized by 10 seconds.