MSB points out ten areas in Sweden with "complex climate-related threats" - and believes that Swedish municipalities must prepare for extreme weather becoming more common. - It is their responsibility to make sure that it works, says Leif Sandahl at MSB. 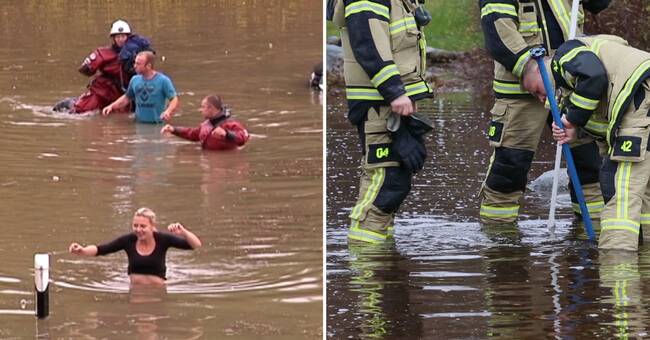 The floods in Germany and Belgium have claimed lives and wreaked havoc.

Criticism has been leveled at what is described as inadequate crisis preparedness in the countries.

In Sweden, too, several cities have been affected by floods in recent years.

- It is important that all municipalities look over the cities so that the population can be protected.

Both life and property can be wasted if there are severe floods, says Berit Arheimer, head of hydrological research at SMHI.

At the same time, she believes that preventive contingency work is lagging behind in many municipalities.

One reason it takes so long is that it is expensive.

- The municipalities must ensure that stormwater wells work and that the water is diverted away from the cities in a good way so that the streets do not become canals where the water rushes forward, says Berit Arheimer and continues:

- Many cities are probably dimensioned a little too badly.

Recently, the Swedish Civil Contingencies Agency, MSB, and the Swedish Geological Survey released a report pointing out the ten areas in Sweden where the risks of flooding, landslides, landslides and erosion are greatest (see fact box).

How well equipped is Sweden?

- I would say that we are differently equipped.

Some municipalities have made surveys for this type of floods from torrential rains, where it is a matter of looking at the local conditions.

Where will the water go?

It is possible to take measures that can eliminate the problems, says Leif Sandahl, fire engineer at MSB.

SMHI has recently been working to improve the weather warning system - and when a warning comes, you also need to think about it as a private person.

- The best thing about preparedness is that the individual understands their risk situation.

You should take part in the current information, such as weather warnings, from SMHI, says Leif Sandahl.