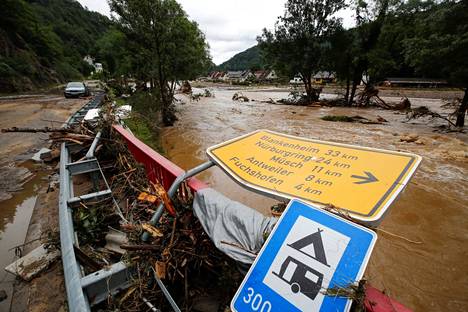 At least 81 people have died in the floods that have plagued western Germany and more than 1,300 people have not been contacted.

In addition to Germany, Belgium, the Netherlands, Switzerland and Luxembourg have also been flooded.

In Belgium, at least 14 people have died, The Brussels Times has reported.

Where do floods come from?

Experts say western Germany received an unprecedented amount of rain in 24 hours on Wednesdays and Thursdays, causing rivers to flood over crustaceans.

The low pressure behind the rains, on the other hand, has remained almost in place, which has also caused rains in western France, Belgium and the Netherlands.

Read more: The lightning-fast floods completely surprised the villagers in Germany - "Where did all this rain come from?"

How has the situation developed?

On Wednesday, it was reported that one firefighter had drowned and the military had been called in to help people trapped in the floods.

The city of Hagen, with a population of about 180,000, declared a state of emergency as early as Wednesday when the Volme River flooded over the crustaceans.

On Thursday, the number of victims had to be constantly updated upwards.

However, the extent of the damage is not expected to clear until later.

Which areas have suffered the most?

In Germany, the states of Rhineland-Palatinate and North Rhine-Westphalia have suffered the most from the floods.

All the deaths in the floods have occurred in Germany in these two states.

The Prime Minister of Rhineland-Palatinate, Malu Dreyer, described to the ZDF that the devastation was “incomprehensible”.

A man walks in the floodwaters of Bad Neuenahr-Ahrweiler.

For his part, Roger Lewentz, the interior minister of North Rhine-Westphalia, described the situation as a “disaster”.

Perhaps the worst floods hit the Ahrweiler area, where some 1,300 people have not been contacted.

The village of Schuld, with around 700 inhabitants, was almost completely destroyed, the BBC says.

In Belgium, the Walloon region has been particularly affected by the floods.

The mayor of the city of Liege on Thursday urged people to leave the city, if possible, The Brussels Times has reported.

- The water level rises by about one and a half meters.

That is why we are asking those who can, to leave the city and especially those who live along the Maasjoki, Acting Mayor Christine Defraigne said.

Authorities also fear that an important dam will collapse, exacerbating the floods.

There have also been floods in Liege, whose mayor urged people to leave town.

How long will the rains and floods continue?

However, water levels in the Moselle and Rhine are still expected to rise.

According to Bild, new storms threaten Rhineland-Palatinate and Saarland on Friday.

The German weather service has issued a warning for heavy thunderstorms, which may also include heavy rains, in the southern and southwestern parts of Germany.

In contrast, no heavy showers are expected in North Rhine-Westphalia.

A road destroyed by a flood in Germany.

How big a disaster is this?

More people have died in the floods than in any other natural disaster in Germany since the devastating 1962 floods, which killed about 340 people, Reuters says.

When the Elbe, which flows along the Czech-German border, flooded in 2002, the floods were called so bad in the media that they only occur once a year.

At that time, 21 people died in eastern Germany and just over a hundred elsewhere in Europe.

Read more: A devastating flood surprised Annel traveling in Germany - an alarm woke up at five in the morning: “Water rose in my eyes”

The floods have caused deaths not only in Germany but also in Belgium.

What is the contribution of climate change?

One meteorological phenomenon or natural disaster cannot be directly linked to climate change.

However, according to experts, it is clear that extreme events such as the floods that have ravaged western Germany will become more common as the climate warms.

Claus Kleber, a news anchor for the German television channel ZDF, said in a TV broadcast that there is nothing miraculous in itself in the low-pressure areas that prevail in western Germany.

Bernd Mehlig, a flood expert in North Rhine-Westphalia's environmental authority, told the German media WDR that floods and heavy rains are unusually severe at the time.

- Such situations are usually encountered only in winter. This is completely unusual in the summer, Mehlig says.