"We did not find a common language": why in Kiev they accused Merkel of surrendering Ukrainian interests in favor of Russia

German Chancellor Angela Merkel "surrendered" the interests of Ukraine in favor of Russia. This was stated by the adviser to the Kiev delegation in the trilateral contact group Alexey Arestovich. According to him, Merkel and Volodymyr Zelensky did not find a common language on a number of issues during the visit of the Ukrainian president to Germany. Earlier, Zelensky announced the divergence of positions between Kiev and Berlin on the Nord Stream 2 project and demanded guarantees of energy security from the EU. Experts emphasize that Germany is not obliged to defend Ukraine's position to the detriment of its interests. 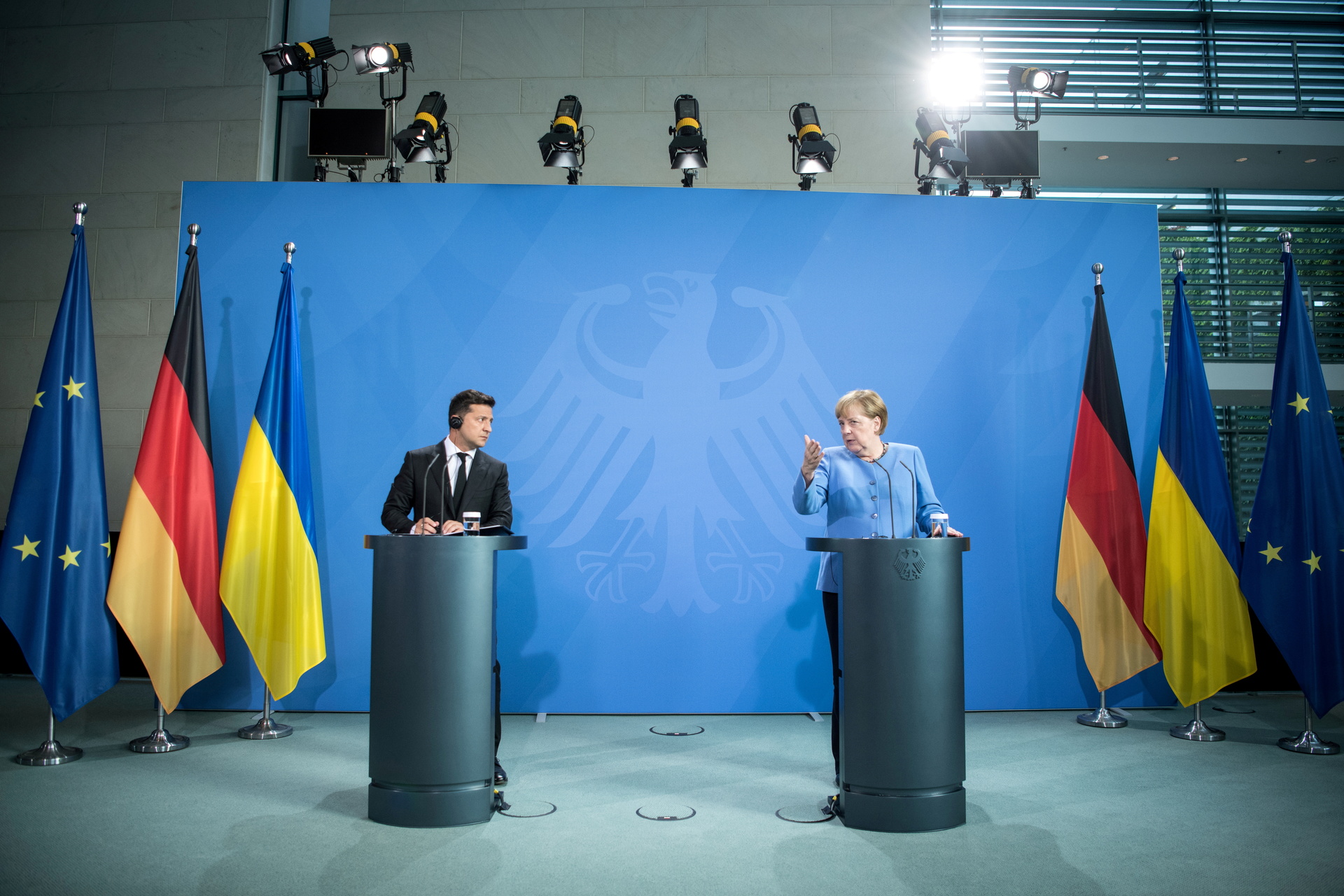 This statement was made by the adviser to the Kiev delegation in the trilateral contact group, freelance adviser to the head of the office of the President of Ukraine Oleksiy Arestovich on the air of the Ukraine 24 TV channel.

According to him, the recent visit of the country's President Volodymyr Zelensky to Berlin "brought nothing."

“I didn’t bring it because Mrs. Merkel held out for seven years, but in the end she gave up her Ukrainian interests a little in favor of Russia.

But, as I understand it, the Germans call it the protection of German national interests, ”said the adviser to the Ukrainian delegation to the TCG.

According to him, the German Chancellor, whom Arestovich called "an outgoing politician," and President Zelensky "did not find a common language on a whole range of issues, from the fate of Nord Stream 2 to the specific implementation of the Steinmeier formula."

But Zelensky did not dispute the position of the German Chancellor during a press conference "in order not to quarrel," Arestovich added.

We will remind, negotiations of Angela Merkel with Vladimir Zelensky took place on July 12.

Before the meeting, the leaders of Germany and Ukraine held a joint briefing, during which Zelensky voiced a number of Kiev's positions.

Thus, he declared his support for the proposal of France and Germany on "key clusters" for the implementation of the Minsk agreements.

“I consider it an excellent project, which was prepared by the German side together with the French side, called key clusters for the implementation of the Minsk agreements.

Only Russia today has not accepted these steps to end the war in Donbass, ”Zelensky said.

Recall that the division of agreements into clusters was proposed by Germany and France back in November 2020 and does not change their content, only proposes to divide the agreements into parts in order to consistently coordinate the actions of the parties to implement the "Package of Measures for the Implementation of the Minsk Agreements."

In particular, according to these clusters, the assignment of a special status to Donbass and the holding of elections in the region will be organized before the transfer of control over the border to Ukraine.

These clusters were transferred to the trilateral contact group as recommendations for the subsequent development of a "road map", which should become the final version of a peace plan for resolving the conflict in accordance with the Minsk agreements.

However, according to media reports, Kiev presented its project of clusters to the Normandy Four (Germany, Russia, Ukraine, France), which in a number of fundamental points differs significantly both from the Russian proposals and from the initial proposals of the Ukrainian side itself.

Experts note that Ukraine welcomes any attempts to revise the Minsk agreements, even those in which the sequence of actions changes without changing their essence.

“They signed these agreements and now they are trying to change the rules.

This is the traditional frivolous position of the Ukrainian leadership, which demonstrates the incapacity and inability to independently make political decisions, "political scientist and economist Alexander Dudchak said in an interview with RT.

As for the energy security of Ukraine, Zelensky proposed to include the construction of the Nord Stream 2 gas pipeline on the Normandy Four agenda, after which he said that Germany and France should provide Ukraine with energy security guarantees, since the launch of the project allegedly threatens it country.

The issue of Nord Stream 2, I believe that this will be part of the issues of the Normandy meeting in the future, ”Zelensky said.

It is worth noting that before the talks between the leaders of the two countries began, the press secretary of the Ukrainian president, Sergei Nikiforov, said that Zelensky "will try to stop the Nord Stream 2 project."

Later, despite the divergence of views on the construction of the Russian gas pipeline, the Ukrainian president said he was pleased with the results of his meeting with the German Chancellor.

And upon his return to Kiev, during a conversation with journalists at the conference "Ukraine 30. Humanitarian Policy", he added that his country intends to obtain from the EU guarantees of "normal gas supply" for a period of 10-15 years.

“How many years do we need to go over and get not in words, but a real result in renewable energy in Ukraine?

That is, we must be provided for for 10 years, our people in the first place.

Our people get gas, our production is not enough, we need to increase, but nevertheless, we are talking about today, so for 10-15 years we must be sure that we will have a normal gas supply, we need guarantees, "Zelensky said. ...

Later, he called on US President Joe Biden and German President Angela Merkel during the upcoming meeting not to make decisions on Ukraine without her participation.

The Biden-Merkel meeting, at which the Nord Stream 2 issue was also raised, took place in Washington on July 15.

As a result, the German Chancellor said that the positions of the United States and Germany on this issue also differ.

“We discussed Russia and Ukraine, and in this regard,“ Nord Stream 2 ”.

We have different assessments of what this project brings, ”Merkel said.

At the same time, she expressed her conviction that Ukraine will retain the transit of gas to the EU after the launch of the gas pipeline.

Recall that the United States has consistently opposed Nord Stream 2 and imposed sanctions against companies participating in the project.

With the coming to power of the Joe Biden administration in Washington, the White House continued to declare their rejection of the issue of building the gas pipeline, but soon the American side refused to introduce new sanctions.

In May, White House spokeswoman Jen Psaki said the US has no way to stop a project that is more than 90% built in another country.

Joe Biden himself confirmed this position following the meeting with Angela Merkel.

“My position on Nord Stream 2 has long been known.

There can be disagreements between good friends, but by the time I became president, it was 90% complete, and the imposition of sanctions seemed pointless, "the US president said.

As Oleksandr Dudchak emphasized, demanding from the United States and Germany some guarantees for themselves, Ukrainian politicians attach excessive importance to the role of Kiev in shaping foreign policies of other countries.

“Considering that Merkel is the head of Germany, it is not clear why she should defend the interests of Ukraine.

In general, this statement speaks of a clear misunderstanding of what is happening in the world, ”the political scientist noted.

Participants in the high-level political process should not act as the current leadership of Ukraine does, added the interlocutor of RT.

“They may be offended at heart, but at the same time they must make decisions and act in accordance with the interests of those people who voted for them.

However, the Ukrainian authorities in any matters really show offense if, for one reason or another, they do not get what they want, ”Dudchak emphasized.

Angela Merkel has repeatedly voiced her position on Nord Stream 2, as well as other aspects of the Ukrainian agenda, so it is not clear what Kiev wanted to achieve from her, the President of the Ukrainian Analytical Center Alexander Okhrimenko said in a conversation with RT.

“From the very beginning it was clear that this meeting would be held for the sake of the meeting and, accordingly, it would not bring any results to Kiev.

Moreover, Angela Merkel will soon leave her post, and for the remaining time she is not going to make new fateful decisions, ”the political scientist said.

Arestovich's hints that after Merkel's departure from the post of chancellor, Berlin's position on Nord Stream 2 and other issues will change are fantasies, Okhrimenko added.

“In general, many Ukrainian politicians try to pass off their fantasies as reality.

It is now unlikely that the Green Party, opposing the gas pipeline, will come to power in Germany.

However, even if the opposition comes to power, these issues are also unlikely to be revised, ”the expert said.

According to Okhrimenko, the project is important for German business, whose interests cannot be ignored by the next German chancellor.

“And, considering that German business is interested in the operation of the Nord Stream 2 gas pipeline, the new German chancellor will defend this project.

Ukrainian politicians can continue to fantasize about this topic, but no one is going to take their opinion into account on this matter.

In any case, Nord Stream 2 will work, ”the political scientist concluded.