Migrants. IOM: the number of deaths along the sea routes to Europe doubled

The Report compares the data for the first six months of 2021 with the same period last year. UN Agency says actual death toll could be much higher as several shipwrecks are not reported and others are difficult to verify 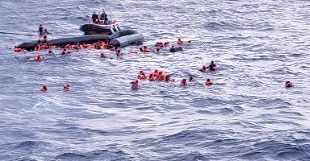 July 14, 2021 In the first six months of this year, compared to the same period in 2020, the number of migrants and refugees who died trying to reach Europe by sea more than doubled. This is what emerges from a report by the International Organization for Migration (IOM), which states that at least 1,146 people died between January and June, while in the same period of 2020 there were 513 deaths. United Nations, the number of migrants who tried to reach Europe via sea routes increased by 56%.

The IOM says the actual death toll could be much higher as several shipwrecks are not reported and others are difficult to verify, while NGOs have warned that the absence of government search and rescue vessels, particularly in the central Mediterranean , makes travel for migrants more dangerous.

European governments, for their part, are increasingly relying on and supporting North African countries to manage search and rescue operations. Tunisia - continues the report - has increased these operations by 90% in the first six months of 2021, while the Libyan authorities have intercepted more than 15 thousand people headed to Europe, three times more than in the same period last year.

More than 15,300 migrants were repatriated to Libya in the first six months of 2021, almost three times more than in the same period in 2020 (5,476), the report reads again. The situation is stressed as "worrying, given that migrants who are repatriated to Libya are subject to arbitrary detention, extortion, disappearances and acts of torture". The report shows an increase for the second consecutive year in maritime operations by North African states along the Central Mediterranean route.