Several European countries are taking a tougher stance on electric scooters. On Tuesday, a decision was made in neighboring Norway to stop them during the night. In addition, several other cities have an age limit for driving - something that is not required in Sweden. 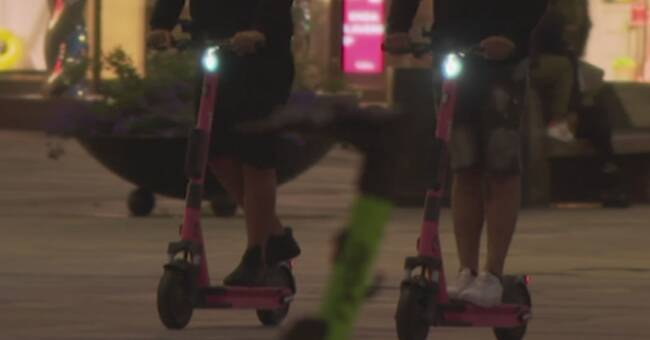 On Tuesday, a new decision was made in Oslo where the electric scooters will be switched off between 11 pm and 5 am.

According to doctors at Oslo University Hospital, the nocturnal locking can prevent between 300 and 400 injuries during the summer.

Oslo is the European city with the largest number of electric scooters per inhabitant.

In the last three months alone, the number has increased by 24 percent to just over 25,700, according to municipal statistics.

Christina Moe Gjerde, CEO of the electric scooter company Voi, says that the news came as a bad surprise.

- The biggest problem is that it will lead to many more players, we can end up with 20 different companies that may have 200 electric scooters each with their own app, says Christina Moe Gjerde to NRK.

In Denmark, it has previously been decided to stop the rental of electric scooters on streets and sidewalks in large parts of Copenhagen.

And in Paris, people are threatening to ban electric scooters if the rental companies do not introduce speed bumps and other regulatory restrictions.

The background is a contagion accident that cost a 32-year-old Italian life as well as the mess that the vehicles cause.

"Either the situation improves significantly and the electric scooters are handled in a public place without creating problems, especially for pedestrians, or we have to consider getting rid of them for good," said Deputy Mayor David Belliard at the end of June.

Age limit common in other countries

According to a report from the European Road Safety Institute, the rules in Sweden are more permissive compared to several other countries in Europe.

A compilation from the Swedish Transport Agency shows that a number of countries, for example, have alcohol restrictions, in Spain and Denmark, among others, there is a blood alcohol limit of 0.5.

The question of what rules apply to electric bicycles in Sweden has been complicated.

The Swedish Transport Agency was commissioned by the government to investigate the regulations.

In its report, which was presented at the beginning of the year, they concluded, among other things, that a ban on electric scooters should be introduced on the pavement.