"Application for destabilization": what is the goal of the Ukrainian-British exercises "Cossack Bulava - 2021"

In the south of Ukraine, the Ukrainian-British maneuvers Cossack Mace 2021 ("Cossack mace") with the participation of NATO countries started. The trainings, which will last until July 24, will involve about 2,000 servicemen and more than 300 units of military equipment. As noted in the release of the command of the Ground Forces of the Armed Forces of Ukraine, the exercises allegedly "will help ensure the security and sovereignty of the Black Sea region." Also in Kiev, they believe that the maneuvers will be "an important step towards Euro-Atlantic integration" of Ukraine. However, according to experts, the real purpose of the exercises is to create tension along the Russian borders, as well as to transfer military equipment participating in the maneuvers to Kiev. 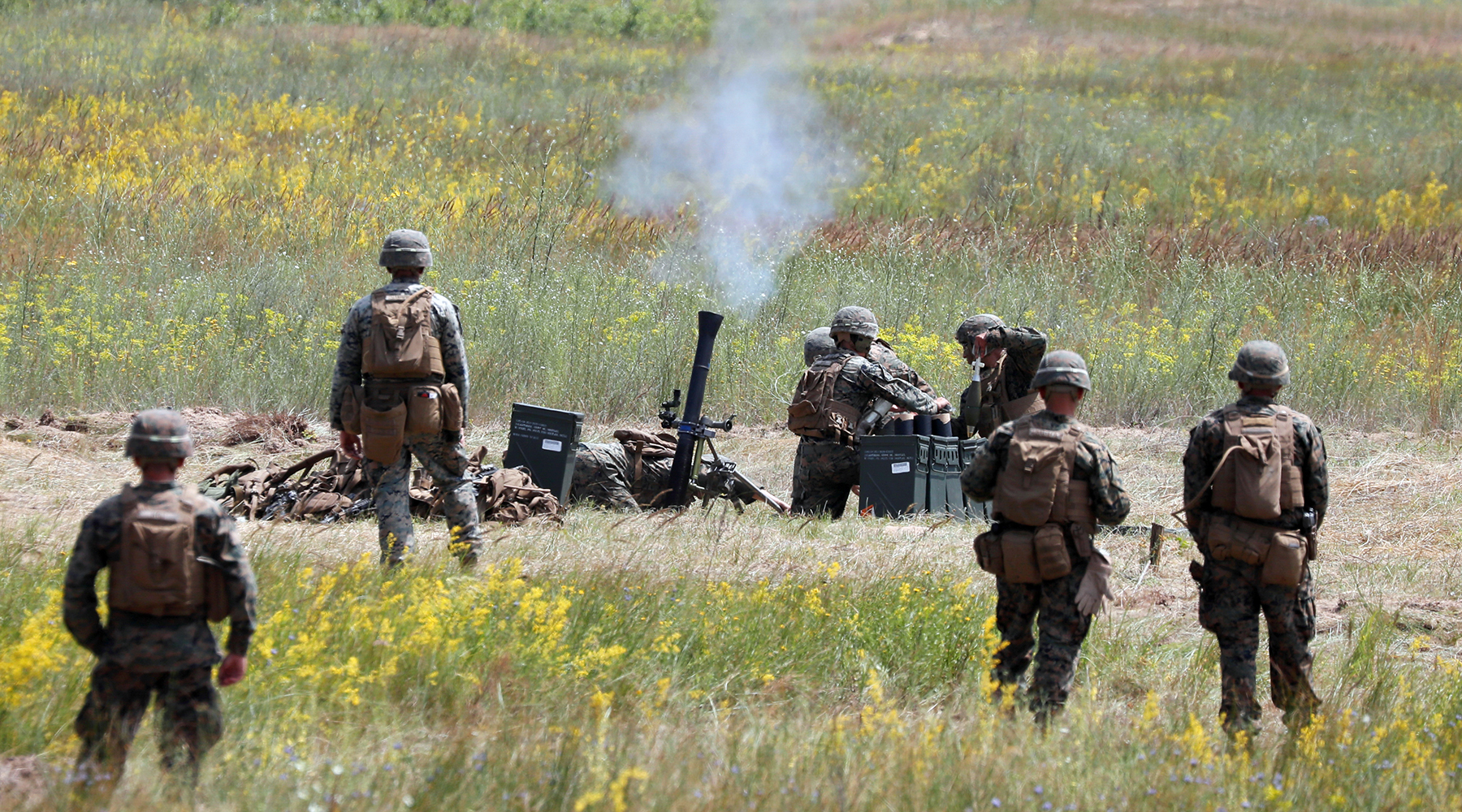 In the south of Ukraine, the Ukrainian-British maneuvers Cossack Mace 2021 ("Cossack mace") began with the participation of NATO countries, in particular the United States and Canada.

The training will involve about 2 thousand servicemen and more than 300 units of military equipment.

The exercises will last until July 24, the press service of the command of the Ground Forces of the Armed Forces of Ukraine (APU) reported.

"In the Nikolaev region, under the general leadership of the commander of the Ground Forces of Ukraine, Colonel-General Oleksandr Syrsky, the international Ukrainian-British military exercises" Cossack Mace - 2021 "began, - said in a message posted on the command's official Facebook page.

The statement contains a statement by the Ukrainian Brigadier General Vladislav Klochkov.

According to him, the operation that will be carried out during the joint exercises "will show a real result in hostilities."

The thesis of "Russian aggression" was also voiced again.

“We are forced to defend our country, and today we appreciate the support that you provide to us,” he addressed his Western colleagues during his speech at the opening of the exercise.

According to Ukrainian Colonel Volodymyr Kokorev, the Cossack Bulava 2021 exercise is “an important step towards Euro-Atlantic integration” of Ukraine.

“They will strengthen the operational capabilities of our troops, improve the level of interoperability between the units and headquarters of the Armed Forces of Ukraine and the United Kingdom, as well as the United States, Canada, the Kingdom of Sweden and other NATO members.

The war in the east of Ukraine is a threat not only to Ukraine, but also to the security and stability of all countries in Europe and the world.

Our partners are absolutely in solidarity on this issue, ”the press service of the command of the Ground Forces of the Armed Forces of Ukraine quoted him as saying.

As Kokorev added, Ukraine and NATO countries have teamed up in the framework of the exercises "to overcome the current challenges and find mechanisms for an adequate response to them."

In turn, the commander of the 4th battalion of the Royal Regiment of Scotland, Colonel Alestia Hampenstall, said that the "Cossack Mace - 2021" maneuvers allegedly "will help to ensure the security and sovereignty of the Black Sea region", as well as "confirm Britain's unwavering devotion to international stability."

"Military development of the territory of Ukraine"

These are far from the first maneuvers that are carried out on the territory of Ukraine with the participation of units of NATO countries. In February, Volodymyr Zelenskyy signed the law "On approval of the decision of the President of Ukraine on the admission of units of the armed forces of other states to the territory of Ukraine in 2021 to participate in multinational exercises." It said that this year, eight multinational exercises will be held on the territory of Ukraine, in which the military from the USA, Great Britain, Poland and Romania will be involved. It was reported that about 21 thousand Ukrainian military and about 11 thousand foreign ones will take part in the maneuvers.

In May, a two-day joint exercise of the flagship of the Ukrainian State Border Guard Service's Maritime Guard "Grigory Kuropyatnikov" (Project 1241 missile boat) and the US Coast Guard ship Hamilton took place.

The training was also attended by the patrol boat "Starobelsk", which several years ago was withdrawn from the American Coast Guard, and then transferred to Kiev.

As reported in the State Border Service of Ukraine, the crews worked out the coordination of the actions of the tactical group "to suppress provocations at sea and repel an attack from the sky in accordance with NATO standards."

In June and early July, Ukraine and the Joint Command of the US Armed Forces in the European zone conducted the Sea Breeze 2021 exercise. According to the press service of the Ukrainian Navy, during the maneuvers, an operation to "stabilize" in the crisis region was being worked out. According to the legend of the exercises, illegal armed groups seized government authorities and set up a number of camps, checkpoints to control transport routes, airfields and important infrastructure "in order to create a quasi-republic." It was also noted that Sea Breeze 2021 was planned taking into account the experience of hostilities in the south-east of Ukraine.

Earlier it was reported that the countries of the North Atlantic Alliance, including the UK, Canada, the Netherlands, Romania, Bulgaria, Greece, Turkey and Latvia, will be involved in these trainings.

About 4 thousand military men, 40 warships, boats and auxiliary vessels, 30 units of aviation equipment and more than 100 vehicles and armored vehicles were to take part in the maneuvers.

Ukraine and the United States have also planned a joint Rapid Trident exercise, which Ukrainian media reports are slated for September.

More than 4 thousand military personnel from NATO countries and partner states are involved in them.

The Ukrainian State Border Service clarified that these trainings will be "revolutionary", during which they will form multinational units - "the military of foreign countries will be integrated into Ukrainian battalions."

Moscow has repeatedly stressed that the conduct of NATO exercises on the territory of Ukraine has a negative impact on the level of security in the region.

So, in June, Vladimir Putin expressed concern about the "military development" of Ukraine by NATO countries.

“The military development of the territory that directly borders us - this creates significant security problems for us.

This concerns the real vital interests of the Russian Federation and the people of Russia, ”the President said during a straight line.

"Under the guise of an exercise"

Alexei Podberezkin, director of the Center for Military-Political Studies at MGIMO, noted that recently the “specific interest” of NATO states in Ukraine and the Black Sea basin has become very clear.

“The latest maneuvers of NATO countries in Ukraine, including the exercises“ Cossack Bulava - 2021 ”, are focused specifically on the southern part of the Ukrainian state and the territories adjacent to Crimea.

Thus, once again, an application is being made to destabilize the region, "the expert said in a conversation with RT.

In his opinion, Kiev and London, as well as a number of NATO countries, conducting regular exercises, set themselves the goal of creating tension on the Russian borders.

“Such maneuvers can be regarded as a provocation on the part of the alliance countries and Ukraine.

NATO wants Russia to turn on the maximum number of its radar stations, to unmask itself, ”the analyst said.

Podberezkin also stressed that, speaking of "Russian aggression" in the context of conducting exercises with NATO countries, the Ukrainian side is once again putting forward a false thesis.

“Russia is not waging a war with Ukraine, the Russian Federation is not a party to the internal Ukrainian conflict.

And Kiev's statements on this topic should be viewed through the prism of psychological and information warfare, which is unleashed against Moscow, ”the expert noted.

In turn, the head of the Bureau of Military-Political Analysis, Alexander Mikhailov, said that the entire foreign policy of Ukraine is being built on anti-Russian rhetoric and the presence of NATO troops on its territory is justified.

"Under this sauce, the West will conduct its exercises, master ammunition, and use Ukraine as a buffer zone," said the interlocutor of RT.

According to Mikhailov, NATO countries are making Ukraine their springboard, which is convenient for them primarily in terms of proximity to Russia.

“The alliance also takes into account the fact that Kiev will not be indignant over the destruction of Ukrainian roads by NATO tanks and military equipment.

The Ukrainian authorities will not pay attention to the fact that the country is causing great environmental and economic damage, ”the analyst said.

As for Ukraine's motives, the country's authorities agree to all this and want to accept such exercises, “showing maximum loyalty to NATO,” hoping to one day, albeit in the distant future, find themselves in the bloc, Mikhailov said.

“Kiev wants to receive material benefits from this, as well as other preferences.

But the Ukrainian authorities cannot understand in any way that the United States and the bloc itself do not need this, they are ready to hang Ukraine with second-rate weapons, but just not take it into the alliance, ”the expert stated.

Podberezkin also expressed the opinion that some of the western equipment, which will be used during the maneuvers "Cossack Bulava - 2021", will not return to their places of deployment.

“It will be at the disposal of the Ukrainian army under the guise of exercises.

Previously, such a scheme was used during other similar trainings, ”the analyst said.

As Podberezkin noted, the recent incident with a British destroyer in the Black Sea, which deliberately crossed the Russian border, "taught nothing" to Britain and other countries of the bloc.

The same applies to other states of the alliance.

At the same time, it is easy to predict that this kind of activity will continue to be observed, ”he said.

Mikhailov, for his part, noted that the North Atlantic Alliance will expand the range of military exercises on the territory of Ukraine, as well as in the Black Sea.

“There is already a tendency when NATO warships do not leave these waters after some exercises, but immediately switch to other maneuvers, which are also taking place in this region,” the expert said.

In turn, Podberezkin drew attention to the fact that Russia is constantly monitoring the movements of Ukrainian and Western ships in the Black Sea, and also oversees the conduct of exercises in the region.

“In the event of unforeseen situations or deliberate provocations, the Russian side is ready to give a worthy response, and our partners in the West know this,” he concluded.