When a drug search dog marked in a property on Gideonsberg in Västerås in October last year, the police carried out a major raid - which led to several drug hiding places being discovered. Several people with connections to the Västerås network have now been sentenced to prison. 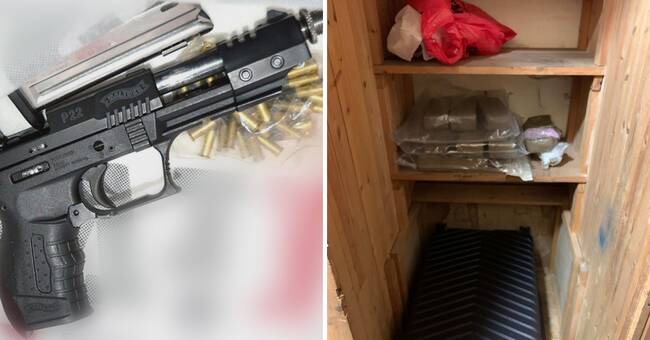 During the summer and autumn of 2020, the police conducted several reconnaissance cases against drug crime in Västerås.

Among other things, this led to several men being sentenced to prison earlier this year after the police discovered that drug sales were taking place in a car park in Bjurhovda.

Several kilos of drugs were found

Gideonsberg was also suspected of drug dealing around an apartment building.

When the police raided the property, a drug search dog marked and in a storage room, about 11 kilos of hashish were found - which was completely open in the storage room.

There was also found a pistol packed in a plastic bag together with magazines and suitable cartridges.

When the police expanded their search, more drug hiding places were found.

In the stairwell, more than 14,500 Tramadol tablets were found hidden in a hole in the ceiling.

Drugs were also found in an adjacent garage to the property - about three kilos of cannabis.

While the raid was going on, two well-known people from the police came to the scene, and they were arrested.

These two men have now been sentenced to prison in Västmanland District Court.

A man in his 30s is sentenced to five years in prison for, among other things, a serious drug crime and a serious gun crime.

He was acquitted at the same time on some charges of drug crime.

A 25-year-old man is sentenced to three years and four months in prison for a serious drug offense and drug offense.

At the same time, three more people are convicted of handling the pistol found in the storeroom.

All are sentenced to between twelve and eighteen months in prison, for a felony.