After the explosion in Jebel Ali Port, Dubai opens an extensive investigation into the ship's fire, and navigational data shows a map of its movement

An investigation was announced in Dubai into the causes of an explosion that caused a fire on board a ship carrying flammable materials in Jebel Ali Port, which reverberated throughout the Gulf city and caused damage, but did not result in injuries or deaths. 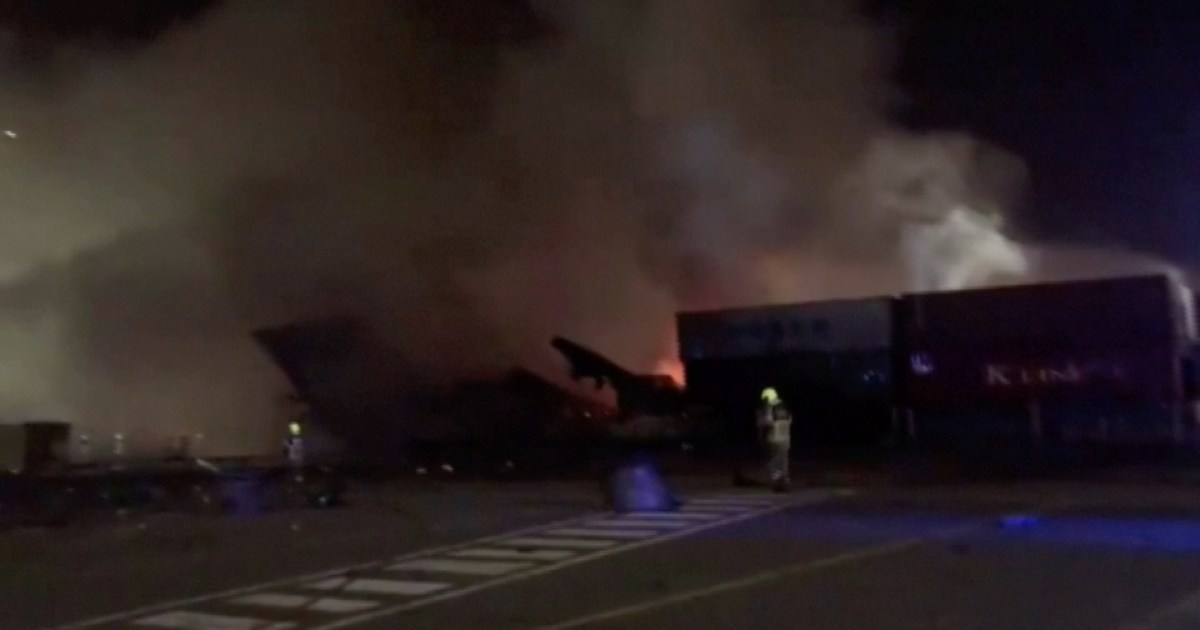 An investigation was announced in Dubai into the causes of an explosion that caused a fire on board a container ship carrying flammable materials in one of the busiest ports, which reverberated throughout the Gulf city and caused damage, but did not result in injuries or deaths.

The media office of the Government of Dubai said that the port of "Jebel Ali" announced the start of an extensive and intensive investigation into the cause of the fire that broke out last Wednesday night and the circumstances surrounding it, with the port's operations continuing as normal and without disrupting its schedule, according to what the office says.

And the media office of the Government of Dubai said - earlier - that the fire was caused by an explosion on board a ship in the port of "Jebel Ali" in Dubai.

Earlier, the Commander-in-Chief of Dubai Police, Lieutenant-General Abdullah Khalifa Al-Marri, said that a fire broke out in a ship on berth 14 in the port of "Jebel Ali", which was carrying flammable materials.

Al-Marri confirmed - in statements to Dubai TV - that the fire was brought under control, and there were no deaths or injuries.

For its part, the Associated Press reported that the force of the explosion led to the shaking of many houses in the city, and that the explosion was heard 25 kilometers from the port.

Agence France-Presse reported that the explosion was powerful and was heard throughout the city, and quoted at least 3 people in the vicinity of Jebel Ali as saying that the explosion shook the doors and windows of their apartments and homes in southern Dubai.

The concerned authorities highly efficiently controlled the last stage of a fire that broke out in a container on a ship preparing to dock on one of the berths of Jebel Ali Port, away from the port's main shipping line, without causing any injuries or deaths.

A Reuters reporter said two fire engines and other emergency vehicles were seen heading south of Dubai, on the main road to Abu Dhabi.

Navigational data for the fire - which broke out in the port of "Jebel Ali" in the UAE - showed the name of the ship and a map of its movement.

According to the data, the ship is called "Ocean Trader", flying the Comoros flag, and it arrived at the port of "Jebel Ali" on the first of last June, and it is dedicated to transporting containers, and it belongs to the company "INZU Ship Charters Ltd." CHARTER LLC) of the United Arab Emirates, which is headquartered in the Al Qusais Industrial Area in Dubai.

As the data shows, the ship’s movements outside the port in the corresponding area, then return again on the tenth of June to the port, then exit on the sixth of this July, and return again to the port on the seventh of July at 10:20 pm. , That is, several hours before the explosion.

The data also indicated that it stopped at Container Terminal 1 where the explosion occurred.

And the port of "Jebel Ali" is 30 km from the center of Dubai to the west towards the capital Abu Dhabi, and is the most prominent in the Emirates, and one of the most important and developed ports in the region.

8,000 companies are based in the Jebel Ali Free Zone, and this zone contributed about 23% of Dubai's GDP last year 2020, and it is the largest commercial zone in the Middle East.

The port was established in 1979, and covers an area of ​​47.1 square kilometers, and includes more than 180 shipping lines and 80 weekly services linked with 150 ports around the world.

The port's capacity is 22.4 million containers, and it underwent development in 3 phases, which included deepening the port and adding new berths and equipment.