The suspicion is that he carried out terrorist activities, in violation of the national security law wanted by Beijing 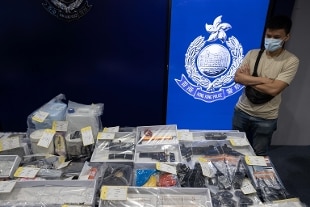 The press conference called by the police

Superintendent Steve Li, of the National Security Force Department, explained at a press conference that the suspects intended to make bombs and that the police raid shattered their plans. The searches carried out led to the discovery of explosives, chemicals that could be transformed into bombs.

Those arrested are aged between 15 and 39. Among the materials seized is acetone peroxide (Tatp), a chemical product also used by extremists for attacks in Israel and London. The group, according to police reconstructions, called itself "Returning valiant", and was based in a hotel in the Kowloon peninsula used as a laboratory.