When New York City became the epicenter of the COVID-19 pandemic last year, middle school teacher Barbara Anderson saw the Upper West Side changing around her. Neighbors have left the city, unemployment has risen, and old shops have closed, leaving clumps of money behind. 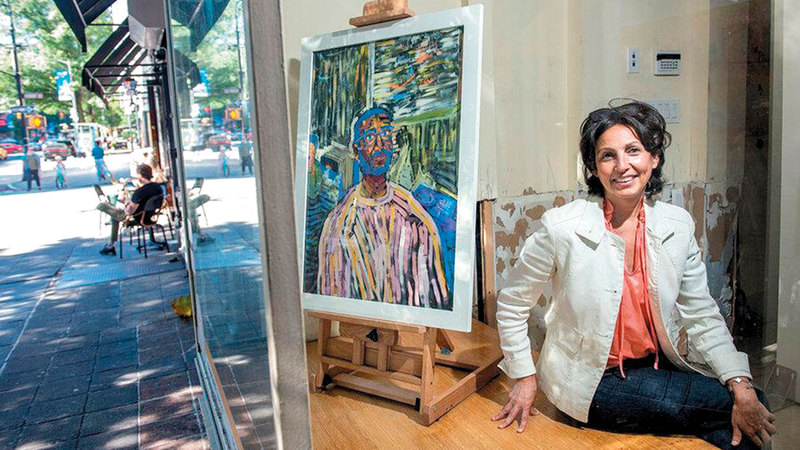 When New York City became the epicenter of the COVID-19 pandemic last year, middle school teacher Barbara Anderson saw the Upper West Side changing around her.

Neighbors left town, unemployment soared, old stores closed their doors, leaving masses of empty storefronts behind, so this woman decided to do something about it.

This woman believes it is a suitable solution to fill abandoned storefronts with a long-term landscape, an art scene that makes Street Art accessible to clients and artists alike.

"You can have talent, but you can't find a place to display your art for people to see," says artist Paula Bermudez, who participated in the first exhibition, which came under the name "Healing" or recovery. New York so that you can do that.”

“The free gallery of art in this neighborhood has become a blessing to me,” says Bermudez, who has lived in New York since moving to the city from Columbia a decade ago.

Listen to the artists

Passersby can scan a QR code on storefronts to hear artists talking about their work.

They can also find links to buy artwork directly from the artists, as well as links to landlords' websites for rental purposes.

All artists are from New York, as the terms of the show state, and approximately 40% of them are members of minority groups.

The Healing exhibition, which ran from November 2020 to January 2021, displayed 55 artworks by 41 artists across 12 storefronts.

More than 12 pieces were sold, and local artists earned nearly $60,000 from the sale.

The current exhibition "Awakening", or Awakening, which opened in early July, includes 28 works in 13 locations in West Village.

More than a dozen pieces have already been sold in the second exhibition, which has generated more than $32,000 in sales for the participating artists.

Bleecker Street, for example, is one of the busiest and most popular streets in the city.

There are 17 commercial fronts in one building on this street, seven of which are still empty.

The "art on the street" project emphasizes the possibility of filling these spaces, and the project can even expand to the city level.

While New York City is expected to rebound from job openings after health improves, Anderson is confident that Street Art can continue into the future.

She believes that the city's retail space will never be 100% leased, and all exhibitors may also be involved in commercial activities, as store managers see the potential to attract more customers by coming to see the paintings displayed on the street.

The Street Art team is now accepting applications for the third exhibition, Resilience, scheduled for this fall in Lower Manhattan, to coincide with the 20th anniversary of the September 11 terrorist attacks.

Anderson says that the willingness of owners to participate varies from person to person, as they do not expect artists to pay them rent.

And it can be difficult for artists when some real estate is rented out during the exhibition.

This has happened several times, in which case the landlord suggests moving the artwork to a nearby vacant lot.

Pauline Auden, who owns a property in West Village, tells the owners of these properties: "What I would say to other property owners is that you have nothing to lose by displaying pictures on your facades."

• While New York City is expected to rebound as a result of job vacancies that will become available, after the health situation improves, exhibitors feel confident that the Street Art project can continue into the future.

• Owners' desire to participate varies from person to person, as they do not expect artists to pay them rent.

And it can be difficult for artists when some real estate is rented out during the exhibition.