Covid. The EU Green Pass is launched, from today it is valid throughout Europe

Brussels urges member states to agree and use the document also to ensure safe entry to concerts, festivals, theaters, restaurants, nursing homes or other facilities 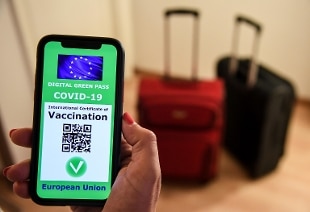 01 July 2021Europe's race to save summer crosses the finish line. Just three and a half months after the first courageous but debated announcement in Brussels, everything is ready for the debut of the Green Pass Covid, the pass designed to give Europeans the freedom to travel to the old continent after the paralysis caused by the pandemic. And to repopulate beaches, cities, mountains and places of art, helping tourism to raise its head after the worst period that can be remembered (the UN has estimated global losses of over 4 billion).

Suitcases in hand, from today it is enough to have the Pass in paper or digital format with you to cross national borders and no longer be subject to restrictions. But not only: compared to the initial idea of ​​using it only for travel, now Brussels encourages member states to agree and use the document also to ensure safe entry to concerts, festivals, theaters, restaurants, residences. health care or other facilities, move in and out of areas classified as "red zone" or "orange zone". Averting the much feared "risk of confusion and fragmentation", too often typical of the EU, also mentioned by the European Commissioner for Justice, Didier Reynders, responsible for the success of the project since its inception.

Technical tool but not "open Sesame", the Pass consists of a QR code to be kept in your smartphone or pocket, like those of airline tickets, with three alternatives to prove you can travel: having completed the vaccination cycle, having tested negative a swab, or be cured of Covid-19 and have developed antibodies. On paper, in short, everything is fine, but there is still no lack of opaque points. Starting from the validity of the same Green Pass. The vaccination test in most countries is valid after fourteen days after receiving the second dose (or single dose, for single doses), but for example in Austria it is only recognized after 22 days. The same goes for the negative results of the swabs, accepted according to the countries between 72 and 48 hours before the trip.

And also the possibility of incurring exceptions and unilateral measures such as quarantines and prohibitions for entry and exit on the various national territories remains present. Because the recommendations established at EU level are not binding. Just think of the latest travel ban in chronological order imposed in recent days by Germany for those coming from Portugal, which forced Brussels to call all 27 back to order. To all this is added the spectrum of the Delta variant, which could quickly change the epidemiological picture and the rules on the continent,re-proposing divisions and disheartening citizens who for now have no choice but to gain strength from the Green Pass, continuing in any case to extricate themselves from the weekly maps of the European Center for Disease Prevention and Control (Ecdc) on the levels of contagion in the various regions and the 're-open-eu' platform, which contains all the updated information on the various national measures.

Meanwhile, reassuring words arrive from Palazzo Berlaymont. Certain of having set up the platform in record time, EU officials have made it known that all member states (and the six neighbors Andorra, Iceland, Liechtenstein, Monaco, Norway and Switzerland) are ready to go with the mutual recognition of certificates . Only Ireland is missing, grappling with a hacker attack that has knocked out its technical circuits. And if someone experiences difficulties in issuing the documents there is still a transition period of six weeks (until 12 August) during which other vaccination tests and / or tests can be presented to cross national borders and enjoy the summer. .

We are bringing back the spirit of an open Europe.

As of today, EU citizens can get their #EUCOVIDcertificate issued and verified across the Union.

Fedriga: "Uniform EU rules on Green Pass would be useful"

"The ability to move freely in complete safety represents an important step forward on the road to economic recovery and, more generally , of the return to normality. I hope that, in the near future, Europe will decide to adopt uniform rules to guarantee mobility to the citizens of the member countries ". Massimiliano Fedriga, president of Friuli-Venezia Giulia and of the Conference of the Regions, says so.

"If the second dose is worth to give you maximum protection, the Green pass somehow we should update it. There are always tampons. There is not only the vaccination that gives the green pass, so in that period maybe it could be possible to increase the number of tampons leaving the Green pass valid ". Thus the Undersecretary of Health, Pierpaolo Sileri