The Yemeni army and tribes forces have thwarted more than 50 attacks on Marib during the past two days, with the continued raids of the coalition fighters focused on Houthi sites, gatherings and mechanisms in several governorates, amid reports of the killing of Houthi leaders and foreign experts in Al-Jawf, while the militias launched an attack. 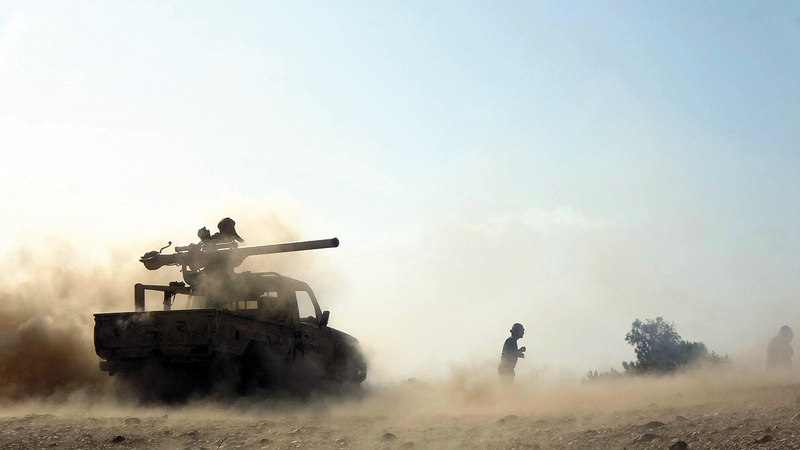 The killing of foreign experts in Al-Jawf... and specific raids on Hajjah

Battles continued between the army and militias on the Al-Jawf fronts.

The Yemeni army and tribes have thwarted more than 50 attacks on Marib during the past two days, with the raids of coalition fighters focused on Houthi sites, gatherings and mechanisms in several governorates, amid reports of the killing of Houthi leaders and foreign experts in Al-Jawf, while the militias committed a new massacre The people of the city of Ma'rib, while it continued its violations of the armistice on the western coast.

In the details, the battles continued on the fronts west, northwest and south of Ma’rib governorate, and extended on 11 fronts, distributed from the outskirts of Al-Jawf Governorate, passing through the outskirts of the capital Sana’a, reaching west and south Ma’rib, in which government forces and tribes achieved qualitative victories, and were able to thwart infiltrations and attacks Houthis, which left dead and wounded among the militias.

Field sources confirmed that major and simultaneous attacks launched by the Houthi militia in the districts of Madaghl, Raghwan and Sirwah, which were concentrated in Al-Zour, Wadi Dhanna, Al-Kasara, Al-Mashjah, Al-Jadaan, Mahzam Mas, Wadi Halhlan, and the outskirts of Wadi Hailan.

The sources stated that the army and tribes forces repelled the attacks launched by the militias in several formats, after violent battles in which various weapons were used, and left dozens dead and wounded, most of whom were the attacking elements.

The army and tribes forces had thwarted more than 50 attacks on Marib during the past two days, and crushed the Houthi crowds through more than 33 combat formations that were pushed to the Marib fronts, as well as the families of hundreds of elements, including school children who were pushed to fight without experience and training.

Field sources confirmed that dozens were killed in the recent Houthi attacks on the Marib fronts, while 15 combat vehicles were destroyed, including armored vehicles and tanks, in addition to the destruction of two platforms for launching ballistic missiles, and the destruction of a weapons store containing a variety of equipment, by coalition fighters in Al-Mashjah and Al-Kasara in Marib.

Adviser to the Minister of Defense, Major General Muhammad al-Hubaishi, said that "the army forces, backed by the resistance, broke all the attempts of the Houthi enemy to advance towards Ma'rib."

For his part, the official spokesman of the Yemeni army, Brigadier General Abdo Majali, said that the army and tribes forces achieved control over the land, liberated important sites, and thwarted infiltration and hostile attacks by militias on the Ma’rib fronts (Sarwah, Al-Kasara, Hailan, Al-Mashjah, Al-Makhdara, Al-Jadaan, Jabal Murad, Al-Abdiyyah, Dhanna and Mas). and Raghwan), and that it was able to liberate two ruling positions in Al-Mashjah, which enabled him to control the firepower throughout the militia positions, and cut off their supply routes.

Majali stressed the importance of the active role of the coalition fighters, which led to the destruction of the mobile combat capabilities of the Houthis on all fronts in the vicinity of Marib and Al-Jawf, and thwarted their movements towards the burning fronts in various governorates.

In addition, the Houthi militia committed a new crime against civilians in the city of Marib, after bombing it with two ballistic missiles that fell in residential neighborhoods in the city, leaving three people dead, including a child, according to medical and other local sources in the city, noting that the attack left 10 injuries among the people. civilians, and a number of homes were damaged.

The sources indicated that the militias fired the missiles from the Thamara area, in the vicinity of Wadi Dhanna, between Sanaa and Marib.

In Al-Jawf, battles continued between the two sides on the fronts around Al-Khanjar, Al-Jafra and Al-Duhaydah, east of the city of Al-Hazm, the provincial capital, during which other Houthi attacks were thwarted and broke in those areas, leaving many dead and wounded among its members, including foreign experts.

The official spokesman for the Sixth Military Region, Captain Rabie Al-Qurashi, reported the killing of two foreign military experts, in the recent battles of Al-Jawf.

In Hajjah, field sources confirmed the destruction of missile launchers, a weapons store, and a stand for Houthi drones, by Arab coalition fighters, which targeted a secret Houthi site in the Bani Makki area of ​​Abs district, leaving Houthi militants dead and wounded, including missile launch experts. and explosives.

In Saada, Houthi reinforcements that were on their way to the seam areas in Baqim district were targeted, which resulted in the destruction of combat mechanisms, and the death and injury of a number of Houthis.

In Sanaa, the Houthi militias buried 44 of their field leaders, who fell on the Marib and Al-Jawf fronts, and they hold military ranks, including: Ali Muhammad Muhammad al-Nimr, Najm al-Din Hizam Ali al-Abdi, and Abdullah Muhammad Ahmad al-Aswad.

In Al-Bayda, the local resistance in the Nata district thwarted a Houthi attempt to advance and regain the positions it had recently lost, in Jabal Al-Qarha, where the attempt was thwarted, leaving the Houthis dead and wounded.

In Hodeidah, the joint forces were able to put out fire sources for the Houthi militia, targeting residential villages in the Al-Durayhimi district, including medium guns and machine guns, as the joint forces dealt with the Houthis’ violations, with decisive blows, directed at their hideouts accurately, as a result of which the militias incurred heavy losses in equipment and lives. .

The militias had renewed their bombardment of the village of Beit Maghari, northwest of the city of Hays, with automatic weapons, after the joint forces succeeded in thwarting an infiltration attempt and creating new sites for Houthi elements.

As part of the violations, the militias changed the name of the "Nashwan Al-Hamiri" school in the capital, Sana'a, after one of its child fighters, who was killed on the fighting fronts during the past few days, called "Hani Tomer".

The Houthi militia has previously changed the names of hundreds of schools, streets, college halls, universities, public squares and mosques, with the names of the symbols of their dynasty and their dead, in a Houthi approach to changing the identity of Yemeni society.

The Houthi bank attributed the procedure to what it described as a memorandum from the head of the specialized criminal prosecution, where the Houthi circular came after its members attempted to storm the bank’s main office in Sana’a.

In Ibb, the Houthi militia looted the medicines provided by international organizations to the health office in the governorate, according to medical sources, confirming that insulin treatment for diabetics had run out from the governorate health office, after it had been looted and sold to Houthi drug dealers.

The sources pointed out that the insulin ran out, after the governorate’s health office received large quantities of free supplies from donor organizations, only to disappear after an attempt at sham distribution, after which it was sold in private pharmacies, and distributed to close people, and those with knowledge and mediation.

• The Houthi militia has buried 44 of its field leaders who fell on the Marib and Al-Jawf fronts.

• The militias seized all funds and balances of Al-Tadamun Islamic Bank, which is one of the largest commercial banks in Yemen.