Significant changes from Microsoft.. These are the most prominent modifications that Windows 11 has received

Microsoft is preparing to launch the new Windows 11 operating system soon, which includes many advanced innovations, including a new Start menu and the integration of Android applications and Teams. 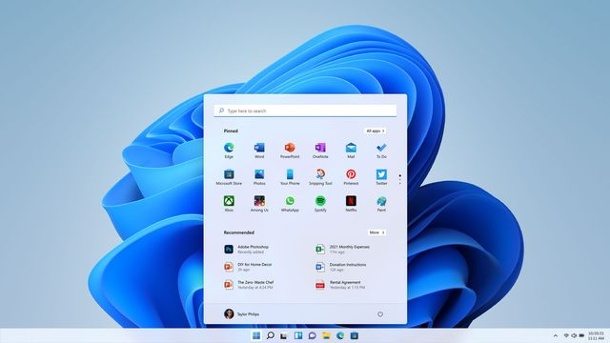 Microsoft is preparing to launch the new Windows 11 operating system soon, which includes many advanced innovations, including a new Start menu and the integration of Android applications and Teams.

Here is a quick look at the most important new functions in the upcoming "Microsoft Windows 11" system.

Currently, a set of icons for programs and related documents appears in the “Start” menu instead of the “Live Tiles”, which appeared with the launch of the “Windows 8” system, and the “Snap Layouts” function divides the screen into ready-made ranges for different applications. And the new "Windows 11" system can save different groups of applications through this function.

In light of the outbreak of the Corona pandemic, the importance of video chat programs has increased, whether for educational purposes or communication between corporate employees, and these services, such as the “Zoom” program, witnessed a huge boom in the number of users, so the American company integrated the Tims program into the operating system, including This will show the program's icon in the taskbar.

The American company confirmed that the requirements for the new operating system are still minimal, as the new “Windows 11” system needs 4 GB of random access memory and an internal memory of less than 64 GB with a dual-core processor with a speed of at least one GHz, note that all can be upgraded Old computers, which appeared 4 years ago, to the new "Windows 11" system.

In addition to the new computers, which will come pre-installed with the new “Windows 11” system, the devices equipped with “Windows 10” will be upgraded free of charge.

It is scheduled to launch new computers equipped with the system "Windows 11" at the end of this year, and new updates will be launched at the beginning of next year.